The ongoing saga of brrrrrrrr!

Following seamlessly on from my previous post, my fuel supplier managed to make it out to my house on Monday to deliver 2,000 litres of heating fuel (despite one of their trucks being out of action and despite it not being possible to go through town because the bridge is out - so kudos to the fuel company for that). When I got home Monday night, I ran downstairs to turn the furnace on and luxuriated briefly in the hot air coming off the radiators before I had to run out to go to sewing club. Got home at 10.30 p.m. and there was no bloody heat!!!! Whaaaaaatttttt???? I ran back downstairs and restarted the furnace and went to bed - and woke up the next morning freeeeezzzing again! What the *!*!*!*!*!!?  So again I got on the phone to my maintenance company who promised to come out the same day. They called later and left a message to say that the fuel guy must have flipped an inlet valve on the fuel tank to the "off" position as no fuel was getting through to the furnace!! Bloody hell. So now I am going to get billed for two call-outs by the maintenance company since neither call-out was for an "emergency" or break down. One bill will be for them to point out that I had no fuel in the tank, and the second because the supply valve had been turned off! Oh well, I honestly don't care at this point as I am just so glad to be warm again (did I mention that it was minus 9°C this morning?)!

Yesterday morning I was talking to my boss. He hasn't been feeling well lately but with two young children at home (five and one), it is never a good time to get sick. He was telling me that he had been ill all weekend and thought his oldest was coming down with the same flu-like symptoms! His kids seem to have been continually sick for the past year, which I guess is probably down to the oldest starting school and the youngest starting day-care, as mom has just gone back to work. Well yesterday he called me from home to say that he had to take off in the afternoon as he had a funeral to go to. I reminded him that he had a meeting scheduled at 15h with visitors from Australia! Oh sh*t! So he had to scramble around to get a colleague to stand in for him at the last minute. Then he gets a call from his wife to say that her car has broken down. She was able to get it to a garage and get herself home but they still needed to work out how to pick the kids up later. So immediately after the funeral he had to dash to the garage to get a car seat out of it. Problem was he was on his scooter. He said it was almost lethal trying to get home on a scooter with a car seat strapped to the back in a howling wind!

And just to keep the brrrrr saga going, the weather here has been below freezing for about a week now. We have a wind that sometimes blows in Geneva called "la bise" - it really howls and makes the wind chill factor pretty unbearable, I have to say. On the positive side, it blows all the clouds away and leaves the lake looking absolutely stunning.


My journey to work involves driving to the border and parking in the P&R, and then hopping on the number 25 bus, which takes me door-to-door. Last night I hopped on the bus but the traffic was awful, (as it was in the morning) because when the bise is blowing the ferry boats across the lake don't run. So commuters who would normally park on the south side of the lake and hop a ferry (usually over to Lausanne), have to take their cars and trudge through town, hence the dreadful traffic. 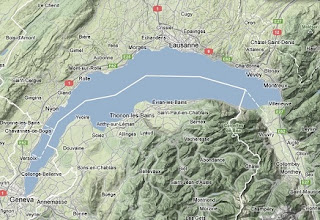 Again it was blowing a hooley so I was so glad to get on the bus and get a seat. About 30 minutes into the journey a voice comes over the tannoy saying "due to traffic delays, this vehicle will not be going to the P&R but will end it's journey at bus stop "Weber"! Frickin hell! Anyway, I dutifully hopped off the bus a little earlier in order to be able to get either bus number 5 or the next number 25 that came along. I stood with two men and we were all stomping our feet trying to keep the cold out. The one gent had an enormous package and a carrier bag so for him getting on and off rush hour buses was no mean feet. After a couple of minutes the number 5 came along, so the two of us and "Mr Big Parcel" managed to insinuate ourselves onto the crowded bus. Not two minutes later we hear over the tannoy "due to traffic delays, this vehicle will not be going to the P&R but will end its journey at bus stop "Rieu"!  One bloody stop further. You can't make this stuff up. I suppose the only saving grace is that this always seems to happen when it is raining and I will take the bise over freezing rain any day. So the three of us, including Mr Big Parcel, trudged off that bus and stood waiting for the next one, stomping our feet to try to keep warm. At this point you either laugh or cry - thankfully the three of us ended up laughing about it. To be fair the next bus came along in less than 10 minutes and we eventually made it to the park and ride. But have you ever had that feeling where you think "if just one more thing goes wrong ......"