In a bid to become more involved in the local French community, I decided to join two evening sewing clubs. Unfortunately they both meet on a Monday night so I have to alternate between them. One is a club where you can just make anything you want and the ladies will help you out - or like some do, just bring your mending along and have a good natter. I think that's a great idea, it's social, cheap (€40 a year just for the room rental) and who knows, you could actually end up learning something. The other club is much more "serious" and more patchwork oriented, which is something I am really keen to learn. Again in this club, one of the older ladies rarely actually sews anything but just comes along for the natter. I was at the patchwork club last night and while we had snow predicted I was really hoping it wouldn't fall until later as some of the ladies won't go out in the snow. Anyway, I made it and have now almost finished the "pochon" that I am making (kinda fabric bag thingy). I had wanted to finish several of these to put Christmas gifts in for my sons' girlfriends but they never got finished in time. There's always next year I suppose.

When we finished up at 10 pm I was just arriving at my village when I thought I noticed something move. We are out in the sticks and there are no lights in the run-up to the village so I slowed right down, and for the first time in nearly 28 years I spotted a deer. 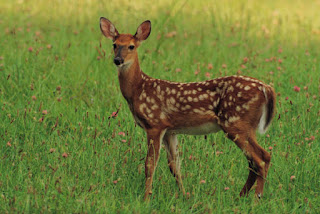 Yes I know everyone knows what a deer looks like but I couldn't resist! And then about 30 seconds later another deer. Luckily there was no-one behind me so I was able to slow right down and admire them. I know to many this might not seem like a biggy, but as I said, I have been in the house almost 28 years, we are in open countryside and have forests all round and I have never spotted a deer. Foxes and even wild boar but never deer (ha, I initially spelled that "bore" and not "boar" - that conjures up a Gary Larson cartoon in my twisted little mind)!

My ex in-laws lived not far from Pittsburgh airport, and although it was near the airport it was actually quite rural. If we took a particular favourite backroad up to their place we could almost guarantee coming across deer.  Every year we went back after that it seemed like they had stripped more and more of the woodland to build shopping malls and it was not uncommon then to see deer running along the highways dodging traffic. Very sad I thought, as their natural habitat was being destroyed with each year that passed. I suppose it also begs the question how the heck could all these shopping malls make money. I mean, when I lived there I used to drive about 30 minutes to a shopping mall, and in the space of what seemed like 15 years there were new shopping malls springing up every mile or so. Not sure how they could compete to be honest.

Anyway, that was just a by-the-way. Tonight I have my once-a-month patchwork lesson down in a place called Cluses. I have to go straight there from work as it is quite a trek and of course we got snow today so I'm keeping my fingers crossed that the roads will be ok. We are in the process of making a patchwork quilt and I am hoping to be able to incorporate into mine three photos taken of my son and his fiancée for their engagement. Apparently you can photocopy a photo onto special fabric and incorporate it into the quilt. Now being a bit of a novice I am going to need help from Lydie, my teacher, but my aim is to get this quilt finished, personalized with their initials and give it to them as a wedding present. Wish me luck, because my sewing output is stupendously low.

On another note, in a bid to lose some weight I have been really good about exercising since the New Year and have exercised every day except one so far but have I lost any weight? Have I heck. I haven't moved an ounce and it is so discouraging. The only positive I suppose is that I have realized how much I actually enjoy exercising. Well, to put it more accurately, I enjoy the way I feel after I have exercised. A bit like banging your head against a brick wall I suppose - it feels great when you stop! As the weather has been great - cold but sunny - I have tried to get outside and walk for an hour at lunchtimes. I have never minded the cold, although the other day it was -6 and with the wind blowing I hate to think what the wind chill factor was. Nevertheless, I conjured up my stiff upper lip, donned four layers of clothing and trudged out at lunchtime.  Trouble is, the cold always makes my nose run. It isn't really the done thing to stop and ask someone to blow your nose for you because you can't bend your elbows is it! Gotta work on Plan B I think.