When I left to go to work this morning it was +1°!!! My goodness, after the last three weeks or so of well below zero (-9° last Wednesday) it almost feels tropical! This weekend we were so lucky to have temperatures above zero and bright sunshine. You could almost be forgiven for thinking spring was on its way, although realistically I know we still have the crappy weather to come in February and March. One thing I did notice with the dry weather though is that I keep getting shocked by static electricity. My colleague was explaining that it was because there is no moisture in the air (it snowed two weeks back but nothing since) so every time I touch the car or the tap to fill up the kettle I get a shock. Yuck. She said don't feel sorry for yourself, imagine how my bloody cat feels!


On a positive note, I weighed myself this morning and I have lost 4 lbs! Yipee (and finally. I have been pretty good since new year exercising and such but for three weeks my weight wavered back and forth around those same 3-4 lb. I have to admit it was getting a bit frustrating to be making a sustained effort and see no reaction from the scales, so this morning's weigh-in felt pretty good. I have been exercising at lunchtimes three or four times a week since the beginning of the year but seemingly with little effect, so in order to get somewhere I knew I had to sort out the "calories in" too. My friend is following the Dukan diet and doing pretty well so far but the big "but" there for me is the lack of fruit. I have my reservations about that diet anyway but you know how when you are desperate you will try anything. I checked it out online (from the UK site) as I already have the books, and by their calculations I should hit my ideal weight by May 2017. For the privilege of joining up and receiving online support though, they wanted £232!!! I couldn't believe it. When I looked at Slimming World online (the meetings are not available over here) or Weight Watchers they were pretty much of a muchness price-wise and I think both of them are pretty good systems. Dukan, however, wanted £232 to cover online support for just that 16-18 week period until I would supposedly achieve my goal weight. Thankfully I didn't sign up in my initial spurt of enthusiasm because I only stuck it out 36 hours before I caved and ate fruit. Going on a total protein diet just wouldn't do it for me, even if the results are (initially) very good. I crave fruit so decided to give it a miss and have signed up for a wonderful site called myfitnesspal.com. It has a free calorie and exercise counter plus online support and forums etc. I think in the end the only way I will lose weight is to do it sensibly and slowly, and looking at the calories in certain foods does bring home how the "extra" calories seem to slip in. We'll see I suppose, but so far I am enjoying it.

On Saturday I stopped in at the local jeweler's - a Harry Potter kind of oldy-worldy shop in town - supposedly to pick up a cheque for a necklace I had sold him three weeks ago. On my 50th birthday my ex bought me a pendant gold necklace with precious stones in it. I never wear necklaces (and he knew that) because I hate anything around my neck. Moreover the marriage was already on the rocks (he left me four months later) so I finally decided to take this necklace down to the jeweler he bought it from (I had the receipt) to see if I could get something for it. He was only interested in the gold so told me to come back next week when he knew the price of gold and he would have a cheque for me. So I stop in three weeks later and I wait 45 minutes while he is dealing with a customer. And you know what, I actually don't mind the waiting. I think I have spent so many years working full-time with young kids and a three-hour daily commute that finally arriving at a point in my life where I can just stand around and daydream is fine by me. Except of course, when it actually came time to serve me he explained that he hadn't had time to remove the stones so could I come back next week? It does baffle me a little that he couldn't have told me that 45 minutes earlier though, but oh well. I guess I have become zen in my old age.

For some strange reason, while I was daydreaming I got to thinking about a post by John over at Going Gently. He asked if people had ever "made a scene". Being "very British" it's not something I would typically do although I can think of one instance when I made a very justifiable scene in a French shop, but that I suspect is a story for another day. No, this story relates to my mom and dad's old neighbour. When they first moved to Dorset they lived next to an old widow named Vera. Eventually Vera died and her son decided that rather than sell her place they would rent it out. Now the only reason I "knew" the new people (or had any dealings with them) was because they owned a home in France and asked me to help them with the French while they were trying to sell their place. Eventually they moved out and the son went in to the house to clean it up for the next set of renters. Apparently the place was a pig sty although you would never have guessed it to look at them - all "butter wouldn't melt in their mouth" types. He was furious. He knew that the wife worked in a local charity shop so one day he went into the shop with a very large bin bag, plonked it on the counter and said "oh you left this behind at my mom's place" and walked out! When the woman picked it up he had cut the bottom out of the bin bag and filled it with all the crap and dirt that he had had to clean up after them - which subsequently spilled all over the floor and counter of the charity shop! Well done him is all I can say, I just cannot believe people can be so filthy.

And finally, now I am back in my work/home/work routine I am, as ever, getting plenty of reading done on the bus part of my commute. I am an avid reader and tend to have 3-4 books on the go sometimes, depending on my mood. I have just finished a lovely book by a Swedish writer called Frederik Backman. If you want a feel good, beautifully written, easy read I can highly recommend "A Man Called Ove". Utterly charming, is about the best expression I can find for it. 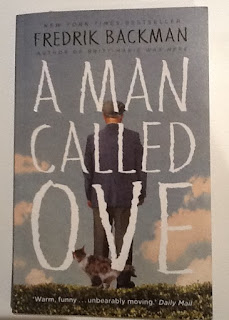