In July 2019 I sent off a request for an appointment with the French authorities to submit my dossier for French citizenship. I got an automated response and then nothing else but since I knew the delay would be very long I wasn't too worried. I have pretty much everything ready anyway, but two of my papers have to be less than three months old when the file is submitted so I've had to hang fire before getting them - a notarized copy of my divorce and an attestation from the tax people! Then my friend sent off her request in October last year and in the automated reply they said to re-send the email if it was a second request, putting the word "resubmit" in the heading. This she did and they got straight back to her with an appointment for December 2021! So I sent in a "resubmit" email and got bugger all. Then, yesterday I saw on FB that as of 1 January 2021 all paperwork must now be submitted online and the Prefecture in Annecy will no longer be taking appointments. Damn! I've waited, what, 18 months and now this. I looked up the link on the website and it looks pretty easy actually so hopefully if I get the two missing papers I can get that sent off in the next couple of weeks. Just as well really, I suppose, because the pass on my French language exam is only valid two years and then I have to take it again (I guess you forget how to speak French after two years then right)! And all this just to submit your dossier. The actual interview to see if you're integrated into French society will probably take another 2-3 years (seriously), but I suppose that at least gives me time to brush up on French history!

Things are still pretty quiet round here though. André has had two appointments with kitchen companies to see what he wants/can afford to get installed in his new apartment and is quite stoked. Then yesterday - as I handed him a coffee and a piece of cake - he suggested I might like to move in with him when the apartment is ready??? Yeah, right, buddy, it's either that or you learn how to cook right? Still it's been nice having him here and we really have been getting on very well so it's been a definite positive. I suppose, having someone here during this second lockdown has probably made it easier, I guess!

I see on the news that the NRA is in the process of declaring bankruptcy in New York and setting up again in Texas as a "non-profit". New York's Attorney General, Letitia James, has apparently been quoted as saying "you can't escape me with bankruptcy" so I guess there are fun times ahead! Seeing all the security precautions they're taking in D.C. makes me kinda sad though. Of course they would have to have enhanced security with any inauguration, but seeing all the barriers in front of the White House hit me somewhat. When we got married in 1985, after a short stint in a law firm I got a job at the World Bank, which is located just a few blocks away from the White House. So when I had nothing planned at lunch time I would walk down to the park to have my lunch, feed the ducks and sometimes stroll past the WH and there were none of those horrible security fences you see now. I know times change and security has had to be increased everywhere but... Heck where I worked we went from having a few overweight retired firemen posing as security (they were glorified parking attendants really), to being totally fenced in with a kind of "moat" on the lake side to prevent anyone from breaching the security fences, installing turnstiles we had to badge through and real security guards and ex-ray machines located in the main entrance (we used to get the anti-globalisation protesters whenever there were big trade meetings). Maybe the world has become a safer place for it, but it's a sad reflection on today's society isn't it!

In other news, my neighbour and I had planned to go walking yesterday since she has every second Friday off, but the day was wet and grey so we didn't go. Well that's not strictly true because around 4 p.m. the rain eased a little and I decided to get an hour's walk in along the railway line before our new 6 p.m. curfew (in force as of yesterday). Today, however, was totally different. The rain had stopped and the sun poked its nose through the clouds so she called me and asked if I wanted to go out. Sure! I would have liked to go up to La Clusaz but I saw on FB that there had been a landslide half way up the mountain gorge and the road was closed. So I suggested we go to Sixt Fer à Cheval and she said she was up for anything because - much to her shame - in the 18 years that she's lived here they have never been out exploring. Now I'm divorced and God knows my husband and I were at each other's throats at the end (I didn't like his girlfriend), but in the early days we were both very much up for getting out and discovering all there is to see around here - something which her husband just isn't interested in. So we set out and stopped off in Samoens so we could take a quick walk on one of the bridges above where they do white water rafting. I remember being one week away from giving birth and André (then four) went running off towards the bridge saying "look mommy, big", and when I got there I almost fainted as the drop over the side of the bridge was about 100 feet! He wasn't in any danger as he couldn't climb that high and I was only a few lumbering metres behind him but I got a fright anyway!

We tried to get up to the waterfall called Cascade du Rouget but the road was blocked part way up so maybe we can have shot at it another day by walking up - there just wasn't time today! It was such a pleasure to take Isabelle up there though because she kept saying "thank you so much for bringing me up here, it's fantastic" - and it really is! 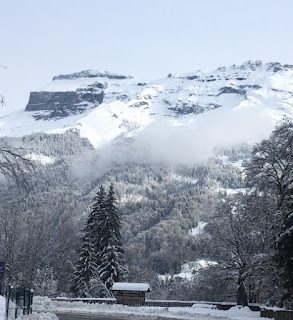 When we got to the end of the gorge we parked up and managed to fit in a 90 minute "trudge" through the snow. If you stuck to the main paths it was okay but go slightly off to the side and you sank up to your knees in the snow, so we both agreed that we'd go looking for snow shoes this week so that we can go back and head out further. It was quite fascinating (to me at least) that in places where something had made a hole in the snow it was actually blue inside and so pretty. And "blue" definitely beats "yellow" as in "never eat the yellow snow" (dog pee)! When we got back from our walk we stopped off and had a glass of mulled wine but we really couldn't hang around too long (a) because of the curfew and (b) because when the sun went behind those mountains it got cold and dark really quickly! 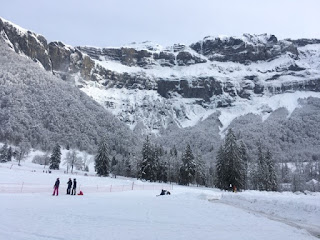 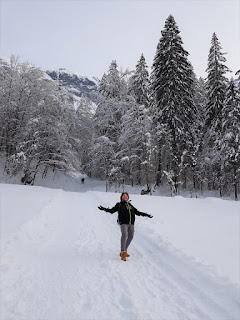 On the way back we just had time to stop in at Picard, the nicest frozen food store around here, where we picked up "truffled mashed potatoes" and ice cream to take home. Isabelle kept saying how much she'd enjoyed herself. I think she's frustrated actually because she has a very stressful job (she's the main breadwinner) and would like to get out and do things during her time off but the kids aren't interested and sadly neither is her husband - although he's a really nice guy. Oddly enough as we were walking back to the car we were both saying how we often don't feel like we've achieved anything. We both cook and clean and keep our homes up but rarely feel like we achieve anything other than the mundane stuff. Maybe other people feel like that too, I don't know, but I sometimes get this odd feeling that I'm just "marking time" somehow and I don't like it. Maybe if we keep plugging away at the walking it will help us both!

When I'd made dinner I saw that Shrek was on TV so André and I sat and watched it. Gosh Eddie Murphy was wonderful as Donkey! I remember one time switching the DVD over to Spanish to see how the Spanish Donkey handled it and I have to say he was also brilliant. In any case André and I had a good laugh. After that Bill Nighy was continuing his documentary series on the world's most beautiful railway journeys and in this episode he was in Sri Lanka, and more specifically Kandy. Gosh that brought back some memories. While not being able to travel hasn't bothered me too much, and goodness knows I've saved an absolute fortune because I haven't been able to take any trips, I must admit I'm quite looking forward to when this bloody pandemic is over and I can scratch the itch that is the travel bug once again!