As I mentioned previously, all of France has been under a 20h - 6h curfew for the last few weeks, with 15 département (states/counties) in the east of the country having their curfew extended to 18h - 6h because of the covid situation. I was fairly sure Haute Savoie, where I live, would become subject to the extended curfew when the situation was reviewed this week but somehow we seem to have "slipped through" and get to maintain the later curfew. A curfew is still a curfew of course, but I can live with this one (well I don't have much choice really do I)!

It's probably the time of year but I seem to be really tired at the moment for some reason, although goodness knows I haven't been doing anything exciting to warrant it - apart from nearly burning the house down yesterday! Well not really, but I did manage to start a stupid fire in the garden! Ya see, I'd been working in the basement again yesterday evening and decided that it was finally time to get rid of some of the paperwork concerning the house we owned in Florida. We bought it in 1999 with a view to renting it out and sold it, finally, in 2003 because I was fed up of the work involved in maintaining a rental that was so far away and I didn't want to have to spend every vacation we ever had in that house. So we sold it. Anyway, yesterday I pulled out the files relating to the purchase and sale of the house and while I will obviously keep those papers, I felt it would be ok to get rid of the files relating to the holiday rentals. Rather than lugging them all upstairs and putting everything through the shredder I decided I could just as easily burn it in the composter at the bottom of the garden, thinking that the ash would be a good addition to the compost. So I started putting in a few sheets of paper and over time it took off a little, although why I choose to do this kind of stuff at nine in the evening, in the pitch black and -4°C I have no idea! Still, it was moving along quite nicely until I came out of the garage and suddenly realized that there was a helluva a lot more flame than a few measly sheets of paper would warrant. Well it turns out that the actual composter had started to burn! I know!!! I reckoned with all the rotting veg in there it was quite safe and never thought for a minute that the bloody plastic bin itself would start to give up the ghost but it did! I had a bucket of water in the garage and put the fire out post haste and with it being at the bottom of a frost covered garden there was no real danger that anything would catch fire but still I reckon it'll be fun explaining that to the neighbours next time they go to throw stuff in the compost! 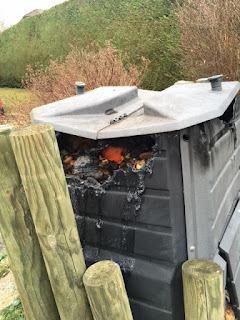 I've been pretty good about keeping up with the walking so far, just missing one day when I got back from shopping so late that it was starting to get dark and I don't like walking in the dark round here because there are no street lights. The other day I took myself off on the longer Tour de Saint Sixt walk and was pleasantly surprised to find that it wasn't as hard going as I imagined it was going to be. I was a bit surprised though when I was trudging up a path through the woods and a deer came hurtling past me because it would seem that I had taken him (or more likely "her") by surprise, rather than the other way around. Considering how much I huff and puff up that path I can only assume that that deer's survival instincts were a bit rusty or she might have needed a new battery for her hearing aid! But while that was a lovely sight it suddenly dawned on me that it might just still be hunting season - which generally runs from September to February-ish and I probably should have had a yellow jacket on even if I was on a public footpath. And then I got to thinking about how lucky I was that it was a deer that had crossed my path and not a wild boar, so I starting scouting out trees to make a possible run for it if a bad tempered boar decided to come running at me. So while everything worked out well and I got a good walk in, it probably wasn't the best thought-out plan I have ever made!

That being said, a better plan was put into action today when my neighbour called to check if I was still up for going out walking with her. We set off to one of my favourite little lakes at Thyez and when we got to the end of my usual one hour circuit I showed her the notice board where four different "fun run" circuits were laid out. It was odd because the maps were actually upside down compared to where we were standing in relation to the river but once we (she) figured that out we decided to do the shortest of the four walks along the river. And it was really nice, I mean, with all that yacking neither of us really noticed how far we had walked nor how cold it was (-3°C). Isabelle had five layers of top clothing on to my three but we were both comfortable and ended up getting in a good eight mile walk all told (plus a bit of messing around on the exercise machines dotted along the river)!

Isa is all motivated to keep going (as much as she can while still working) so it'll be nice to have company when she is available. My car has to go in for its contrôle technique (MOT in the UK) on Tuesday and as it's right next door to a sports shop I'm going to go and look for some Yaktrax, which are kinda like snow chains you put over your boots for walking on the snow and ice! There'll be no excuse for not getting out there walking after that will there!

After dinner this evening I saw that there was "30th birthday" tribute for Mr. Bean, since it was 30 years ago that he first appeared on our TV screens. He was/is incredibly silly and funny, particularly at the beginning, but what is so interesting is that the real Mr. Bean (Rowan Atkinson) is much better looking in real life, very intelligent (he is a chemical engineer by training) and so very well spoken. So happy birthday Mr. Bean, it's been fun!