As usual, there's not much going on here for obvious reasons. At the moment I'm listening to Boris on TV announcing a complete lockdown in England again, just a couple of days after the same was done in Scotland. President Macron is going to speak to the nation on Thursday I believe so I guess we'll see what he has to say then! One thought that did cross my mind though is that given that there has been significant activity in and around Prestwick Airport (Scotland), it would appear that Trump might be planning on flying to Scotland ahead of the inauguration. The thing is, Scotland is in complete lockdown for the next month so I wonder if he will still go. Even if he does rock up (poor Scotland) I have no doubt whatsoever that he will disregard lockdown rules anyway (see Mar-a-Lago). Hell, show him a rule and he'll show you how to trample all over it right?

I was talking to my sister in England this weekend and she was saying that despite all the trumpeting about how smoothly the new Brexit situation is running, the truth might be somewhat different. Her daughter works for Brittany Ferries, which has ferry routes all over Europe, but mainly to France. She only deals with freight trucks and was saying that the truck drivers are doing their nut because they have been given conflicting information about what paperwork they now need to enter the EU. Add to that, Kent has now seemingly introduced a £300 congestion charge which they sprung on the truckers at the last minute while they were stacked along the motorways, so they're not only getting hammered by additional paperwork but also additional, unforeseen charges. In Poole, where my niece works, access to the port is through small back streets so they are having to stop the trucks well away from the port in order to verify paperwork. Talk about stressful! Then today I've been reading about Brits resident in the EU who have been denied access to their flights in the UK while trying to get back home because certain airlines have insisted that their proof of residence in their chosen country is no longer valid. This seems to have been more the case with Sweden, Holland and Spain, but I have to say the British Embassy in Paris have been very much on the ball trying to ensure Brits trying to get home to France are able to do so without hassle. "Piss up" and "brewery" does spring to mind though. One thing's for sure, I won't be leaving France for the foreseeable future unless something very major happens!

André was a bit bored on Sunday so took himself for a drive up to La Clusaz - and he said the place was packed. None of the ski lifts are open but people are doing cross country, snow-shoeing or just walking in the mountains, although he did see a few brave souls actually climbing to the top of the slopes in order to at least get one downhill run in (sooner them than me). He also said the restaurants seemed to be doing a roaring trade in mulled wine and take-away snacks (good for them), but since the car park in La Clusaz was actually full he drove further up the mountain to a lovely spot called the Lac des Confins and had a walk up there! It's one of my favourite spots!

I've been very good about going out walking so far (I'm 4 or 4), even if it is only for an hour locally. As luck would have it, I got talking to my neighbour, Isabelle, the other day and she was moaning about (a) her weight and (b) the fact that her husband and kids never want to go out walking/exploring and she is itching to get out there. So long story short, it looks like I might have found myself a walking buddy. While I'm happy to go out alone, it is nice to have company sometimes too. She is still working so it would only be on occasional Fridays and at the weekend but I'm happy with that. So yesterday I took her down to the lake at Passy and although it was overcast and very cold we managed to get a good couple of hours walking in. It's a shame it wasn't as pretty as it is when the sky is clear but I'm sure we'll go back again! We also had the foresight to take thermos flasks with tea as it was so cold, and by the time we'd gotten back to the car and it had started snowing, we managed to steam up all the windows in my car with the tea. I bet that gave any passing walkers something to talk about! 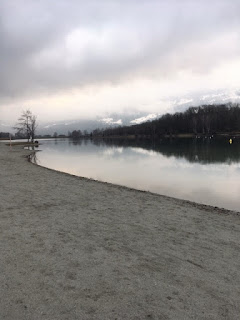 When we got back Jordan and Jen were at home as Jordan wanted to record some drum tracks with André for their group. They ended up staying for dinner (but had to be home before the 8 p.m. curfew). I had been having a cook-fest the other day so I had tons of leftovers to eat up and it was lovely to spend time with the three of them. Jen was telling Isabelle that after the baby is born she would like to go walking with us and knows loads of places we can walk/hike, so that'll be something for us to look forward to!
And finally, I was sorting more stuff in the basement yesterday (I can actually see some progress now) when I came across packs of pre-stamped envelopes in among my ex's stuff. Actually there were several packs of the smaller 20g envelopes (with 100 in each) and another 100 pack of 50g window envelopes. So today I stopped in at the Post Office and explained that my ex-husband had obviously bought them about 12 years ago and could I still use them or did I have to make up "the difference" (the price of stamps went up again on 1 January) and believe it or not they are still valid as is as there is no "end date" for stamps and I don't have to make up the difference to what the cost would be today! So, by my calculation he left behind around €430 ($530) worth of pre-stamped envelopes, which I have already split into several bundles to share with my kids! Hell, while I'm incredibly grateful I will probably never have to buy stamps again for the rest of my life, just how many letters did he think he was going to write in retirement?