Not much going on here!

The French Prime Minister spoke to the nation tonight to announce an extended curfew from 6 p.m. to 6 a.m. throughout the entire country as from Saturday in order to try to bring the covid numbers down further. The situation will be reviewed again in two weeks and there have been rumours of weekend lockdowns being introduced or even another total lockdown if the new variant covid continues to gain ground. André was saying that they are trying to discourage people from socializing for an apéro before the 8 p.m. curfew so that's why they've extended the curfew to 6 p.m!

I told him if they do introduce weekend lockdowns it'll be just me and him and won't it be fun spending time discussing politics together (not - we have very different political views)!

On Tuesday night we got our first real snowfall of the season - about eight inches I would guess - but by the next morning temperatures had risen enough to have thawed most of the snow on the roads, but still leaving great pools of slush! Great fun! I was leaning out my bathroom window watching the snow falling when I noticed paw prints that had me somewhat intrigued, so André and I were trying to think of an animal that has four linear legs that "hops" about half a metre every fifth step! I don't know - the gaps between the sets of prints had me intrigued, or could it just be that covid isolation is getting to me!

I guess maybe I am getting bored since little things seem to amuse me at the moment. My sewing teacher sent our group a picture of a car covered in heavy snow and I commented could you imagine getting home late at night piddled out of your brains and seeing that? No? So I guess it's just me then! 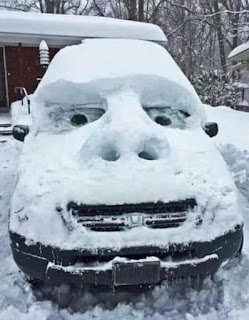 My neighbour told me about a new store that has opened up selling imported Italian produce so I decided to check it out when I went out shopping. It was bloody cold though (-4°C) and when I went to wipe my hands on the disinfectant wipes I keep in my car I opened up a packet of solid ice instead. I guess I'll have to keep them in my purse for the time being! The store was nice and I'll be interested to see if their fruit and veg have the wonderful taste of the stuff we buy in the market in Turin as the season advances. If so, it'll be a definite "yes" from me. After that I went on to my usual produce store - which is also lovely - and yet again I bumped into Chantal - she of the long fur coat and shedload of make-up. This is the third time I've bumped into her while shopping so I might have to change my shopping routine I guess. I don't understand why but yet again she had on six inch stiletto heels and came skidding into the shop through the snow and slush like an Olympic speed skater! Compare that to me with my thick winter boots and newly-acquired Yaktrax! I guess one of us is doing something wrong then! A few years ago we had another colleague who frankly made Chantal look "understated" and she was the same. Weighed about 200 kg and always wore stiletto heels, whatever the weather. Of course one day she fell on the ice and broke her ankle and when the work's doctor gently suggested she lose some weight (and offered to get her help to do so) and wear appropriate footwear for the snow she went ballistic. Then she tried to claim for a cleaning lady on the medical insurance and tried to have leave days recredited to her for Christmas because "everyone else got to enjoy themselves at Christmas and I didn't"! And this despite the fact that no leave days had been debited from her account because we closed over Christmas. There is a mentality amongst certain people that your employer "owes" you so much and these two were the specialists! 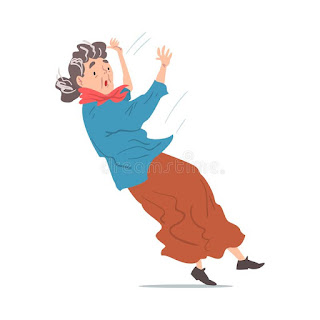 To add to the winter experience, my bloody heating started playing up again last week. Oh the heating downstairs is fine but the radiators in the large bathroom and the three bedrooms on the first floor started coming on at 10 at night and going off around 6 a.m., and this despite the fact that the daytime temperatures were below freezing. I hadn't touched the settings at all so I figured we'd better get Max to come back out but would you believe it, as soon as I called him the bloody things started coming on during the day again as programmed. I have no idea what's going on here, but at least the house is warm all over again!

I've been keeping up with the walking even though I haven't been too enthused lately, and Isabelle and I are planning to go out again tomorrow despite snow being forecast. She's quite keen and since she has the day off I'm up for going if she is. Other than that there's not much going on. Oh I'm doing a lot of cooking and André can sure put the food away (hollow legs I think). I told him if he keeps going like this he'll have to get the doors widened in his new apartment to get his belly through! I finally managed to finish sealing all the windows and doors, putting in new sealant strips on every one. To be honest it wasn't a very difficult job but I'd just do one door then forget about it for a while and so on, but at least they're all done now. And I finished my latest 1,000 piece wasgij - you know, "jigsaw" backwards. To be honest, when I first start doing it it's a pain in the butt and very frustrating, but once I've plugged away at it for a few hours and the pieces start slotting into place it ends up very satisfying. Would you believe I got all the way to the end - so 999 pieces fitted in - and one bloody piece was missing! Then I remembered that Jen had knocked a few pieces on the floor so I looked under the sofa where she was sitting and voilà, I found the last piece. Think I'll give it a rest for a while now though!