After my comment the other day about "marking time" I was somewhat reassured to realize that I'm not the only one that feels this way. I guess it's normal given the horrible times right? So on Monday I decided that if I don't want to stay stuck in a rut I needed to start knocking off some of the stuff on my "to do" list, rather than the just routine stuff of daily living. So I got onto the new website for requesting French citizenship and pulled up the complete list of documents I will require. I knew I had most of them anyway but was missing a copy of my divorce certificate and form P237 from the tax people to prove that I am up-to-date with my income tax. So I downloaded the form from the French government website to request a copy of my divorce certificate, and filled in another form on the tax website requesting said form P237, stating that it was in connection with my request for citizenship - and whadda ya know, the tax people have already gotten back to me with a statement showing my up-to-date tax status for the last three years! Wow, that was fast. The divorce registry will only have received my request today (if I'm lucky) so that will take a little longer, but once I get my carte de séjour (resident's permit) - which hopefully should come soon - I'll be ready to submit my documents for citizenship. I actually prefer doing this stuff online anyway, but it's a shame it set me back 18 months in my timeline. Still, there's not a lot I can do about that and moaning won't change a thing will it!

Yesterday I received my copy of Haute Savoie magazine and was surprised to learn that between 16 and 23 December they had set up 1,300 covid test centres and tested 626,000 people, 29,000 of whom had apparently tested positive!!!! They even organized shuttle buses for rural areas to ensure as many people as possible were tested. Well done whoever was responsible for putting all that together, it can't have been easy!

My neighbour, Isabelle, also seems to be coming out of her "funk" because she's pretty gung-ho about walking at the moment, even though it means trying to fit in a walk during her lunch hour. We're only walking locally during the week because of her work hours, but as the weather has been glorious it's been quite exhilarating and I'm regularly getting in 10-11,000 steps a day! 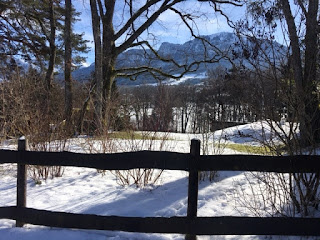 I also spent time in my basement and got the old fridge down there cleaned up and one of the two freezers so I'm obviously feeling quite motivated at the moment. Then I downloaded the Peakvisor and Plantsnap apps because I've finally had enough of never knowing the names of the mountains round here. Oh I recognize some of them, but maybe only three or four, so with my new mountain and plant recognition technology I reckon I'll soon be a walking encyclopaedia!
Tonight André was messing around putting salt down on the back terrace and asked if I wanted to have a snowball fight. Yeah right! So I told him not now as I was making dinner but I would be up for it in August if he liked! The upshot of that is that we made a few snowballs and have put them in my newly-cleaned freezer to save for an as yet unspecified date in August when we'll have that fight! I love that my kids both have a great sense of humour. Then he pulled out a few old photo albums and we were having a good laugh at some of their younger photos but now that's added something else to my "to do" list - scan and upload more old photos into Snapfish albums!
When we'd finished scattering salt outside I picked up the bag of salt to put it back in the garage and nearly fell over. I only bought a 12.5 kg bag because I couldn't pick up the 25 kg bags but crikey, considering that's about the amount of weight I'd like to lose it really brings home how much I'm lugging around when I have to lift it in "bag of salt" form!
Also in the spirit of no longer treading water, I called a bathroom installation company on Monday and the guy came out tonight to get an idea of what I would like to do with my bathrooms and what is feasible for my budget. Turns out he lives about 200 metres from me in the same village. Small world isn't it. I'm under no illusion that this is going to be cheap but as long as it's within a reasonable budget I'm pretty sure I can find something I like (I'm not difficult in that respect). I think I'll probably go for it because once the bathrooms are done all the "big stuff" will be taken care of, and anything else will, hopefully, just be cosmetic!
I watched parts of the inauguration today and was so glad to see that so far it has gone off without a hitch. It was, of necessity, very understated for several reasons of course, but I thought Joe Biden hit the right note with his speech and is now, hopefully, ready to hit the floor running. He and Kamala have a huge job ahead of them!
And just a quick note to thank Judi in Canada for the Christmas card and chatty letter. I don't know when you posted it but I received it yesterday (Tuesday), but thanks so much, it was a lovely surprise!
Finally, my Words With Friend buddy in New York sent me this joke, which kinda tickled me, so I'll leave you with it in the hope it makes you laugh just a little too!
A husband walks into the bedroom to see his wife packing a suitcase so he asks, "What are you doing?"
She answers, "I'm moving to Nevada. I heard that prostitutes there get paid $400.00 for what I'm doing for YOU for FREE!"
Later that night, on her way out, the wife walks into the bedroom and sees her husband packing his suitcase.
When she asks him where he's going, he replies, "I'm coming too. I want to see how you live on $800.00 a year."