There's not a lot going on around here, for obvious reasons. Even though lockdown has eased a little since Saturday, we still can't mix with other people, although we are now free to go out shopping, as non-essential shops are slowly opening up. Bars, restaurants and gyms will remain closed until 20 January at least (ouch) and my various classes are still off limits until then, although the yoga teacher has sent round classes for us to do and I can log on to do a pilates "zoom" class if I want to. Trouble is, I don't really want to - zoom just doesn't seem to do it for me! From what I understand they are hoping to get our Italian classes going again shortly via remote - there's not really much else they can do is there but at least they're trying! So since we're still in semi-lockdown I thought I should get my act into gear and tackle some of the UFOs (unfinished objects) that have been hanging around here since forever!

So with that I pulled a card table up to one of the sofas in the TV room and finally opened up the "wasgij" puzzle I bought about six months ago. If you remember, a wasgij is "jigsaw" backwards, which means the picture you see on the front of the box only slightly resembles the finished puzzle. It's a bit painful to start with but it gets more interesting as you get more pieces in. Actually, André and I were having lunch yesterday and I saw him sidling over to the wasgij and try to find a few "obvious" pieces, so I'm thinking I might buy him one for Christmas, although who knows if he will ever give it a shot. I doubt it somehow! 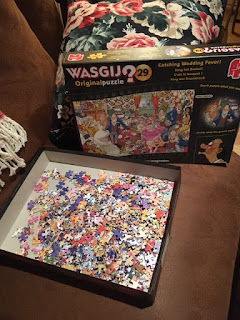 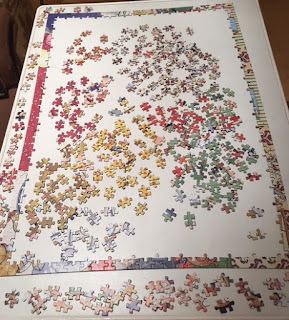 Darn it, I have so many things I could be doing (should be doing, really) that if I don't do it now, during lockdown and with winter on the horizon, when will I do it? A friend and I also bought a couple of cross-stitch projects about three years ago, so I pulled one of them out to finally get started on it. What a nightmare. You start in the middle of the fabric with cross-stitch so I stitched in the letters "O", "P" and "Q", but now I've started on the teddy bear in the car it's starting to look like a big ball of knotted thread plonked on top of a car. It's much trickier than it looks!

I've just finished reading a book called One Man and His Bog, which was written in 1986 and describes the author's hike along the Pennine Way in England. It's extremely well written and very funny, but to be honest there's only so much you can say about trudging through 250 miles of bog isn't there! 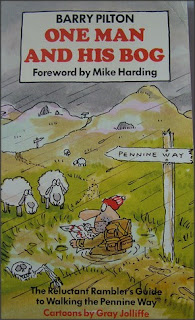 So now it's on to Michelle Obama's book Becoming (I've had it for a year already)! I've only just started it but I very much like the fact that she came from a poor background and made her way in life through intelligence and sheer grit. Of course marrying Barack didn't exactly hold her back either but I sense that she is a woman who was always going to be a success even without Barack in her life! 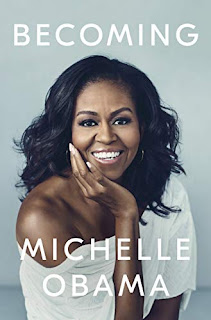 In other news, the oven that I bought just over two years ago started playing up (I bought it 30 months ago to be exact, so no longer under guarantee), so I dashed out today and ordered a new one, which should be delivered on Monday. The old one was a Whirlpool and I have to say I wasn't at all impressed with it from the very beginning, so the fact that it's just conked out after such a short time just confirms to me that I won't ever be buying Whirlpool anything ever again!
Other than that, there's not an awful lot new here. We've been keeping the walking up every day, if not all four of us then at least me and one other person, so that's a plus. Then today I saw John's post over at Going Gently reminiscing about Christmases past and what were your best/funniest memories of Christmas? We first moved to D.C. in 1985 after we got married and the Marine Corps shipped my furniture but it took over four months to get there so my then-husband and I spent four months with no furniture. I remember on Christmas Eve we went to the cinema to see White Nights with Mikhail Baryshnikov and Gregory Hines, and featuring Lionel Ritchie singing Say You, Say Me. It was a great movie and when we came out it had started to snow - something that didn't happen that often in D.C. It was a truly magical evening. For Christmas lunch we had spag bol on paper plates sitting on the floor. We had nothing and yet we were happy! Funny how that works isn't it. Another Christmas, when I was just a little kid in junior school, unbeknownst to me my parents had bought me an upright piano and hidden it in the garage at the back of the houses. Now these were council houses (subsidized rental for poor families) and the garages were not attached to the house but round the back and down a sloping road. After I had gone to bed that night they tried pushing my piano up from the garages but it had started to snow. My sister's description of my dad and my brothers trying to push that bloody piano uphill in the snow was like something out of The Keystone Cops but it's a sweet memory nonetheless!
And finally, about 10 minutes ago I got a call from my ex to tell me that his cousin, Danny, died yesterday from covid after a four week stint in ICU!!! Bloody hell! The expression "only the good die young" certainly applies here as he was one of the kindest, gentlest men you could ever wish to meet. The sad thing is that his wife and family hadn't been able to sit with him all the while he was in hospital and like so many others he died alone! His daughter just posted that when they were clearing out his papers at the hospital they found a note to them saying "Peace and love, see you in heaven"! RIP Danny!
Posted by Treaders at 22:10