Meh! I'm ready for this to be over!

By "this" I guess I mean the bloody election, the lockdown, the pandemic, you name it. Oh, and I'm sure I'll find a few more things to whinge about if you give me time!  Yet I know I have nothing to be complaining about but here we go again. There's a lack of energy - a sadness - in the air this time round. I suppose having the colder weather here doesn't help and then not being able go out into the mountains when we do get good weather since we're limited to one hour and 1 km from home yet again. Still see the positive I guess, we're almost one week in although how much does anyone think that we will be let back out on 1 December? I'm not sure I'll be betting on it! I think this time though I'll have to start walking locally because I'm getting cabin fever and I can sense it in André too, but then I realized he didn't go through the first 12-week lockdown because he was in Switzerland. He's been a bit "prowly" and has indeed taken himself off to walk in the woods a couple of times already. It's kinda sad when the highlight of your week turns out to be going grocery shopping with your mom to Lidl isn't it! Well that and getting out of your sweatpants. At least we had a good laugh this morning when we realized we were both dressed like a his-n-hers version of Vicki Pollard from Little Britain!

I have quite enjoyed cooking for someone again though, but he has never been difficult anyway. I bought a "first night" gift for when he arrived - although we could probably both have done with laying off the wine judging by the headaches we had the next morning! 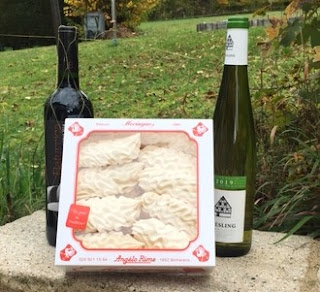 People have been panic-buying a little I would guess but it hasn't been too bad this time round because everyone knows the stores are staying open. Traffic was horrendous when we first got locked down, with people trying to get where they had to be and back to their families. I'm just glad that Jen is on sick leave, André can work from home and just poor Jordan is still putting in all hours God sends at his plumbing job. Still, his last pay cheque was pretty nice, so I guess you can't have it all can you! 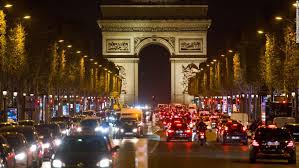 Wouldn't you know though that sod's law would dictate that André and Lily had their appointment at court on Friday to finalize their divorce - yeah, the first day of lockdown! There was some concern about whether he would be allowed to cross the border but everything went okay for that and within a month they should get their papers. Then on the afternoon he had booked an appointment at the bank to find out how much he could borrow if (when?) he decides to buy a place and it's looking very healthy - as long as he sticks to his budget because there won't be a second salary there to split the bills with this time. Still, he's seen a place being built that should be available next summer, so as soon as we're allowed out again he's hoping to go see a show home. He knows exactly where he wants to be, which is on the side of a mountain called Le Faucigny so that narrows things down a bit and is exactly where this second wave of buildings is going up!

We both stayed up half the night last night to watch the US elections - which was pretty stupid really because even now, 24 hours later, they still haven't called it. Then he saw that he had two missed phone calls from Lily and damn it but didn't she just find out that one of her close colleagues has tested positive for covid and she has been trying to get a test ever since - although thankfully not suffering any symptoms at the moment (and hopefully never). They hadn't seen each other in months and wham, they meet up again in court and that's what she finds out. More worryingly I saw that my ex has posted on FB that a lovely cousin of his is in hospital and on a ventilator??? I haven't seen D for years, of course, but on their 20th wedding anniversary they threw caution to the wind and treated themselves to a trip out to see us. We had a great time as they are such a lovely couple. God I hope he makes it through this. So no, seeing what other people are going through, even at a distance, makes me realize that I have nothing to whinge about. Two-by-four to the head duly applied!