It's seemed a very long week here this week. So much sameness and yet different because we've been staying up half the night watching the elections. At least tonight (or maybe tomorrow) I'll go to bed a bit earlier (it's already 1.30 a.m. here)!

I bought some lovely meringues the other day thinking André and I would enjoy them, but so far it's only been me!!! "Luckily" for me, as I was putting the groceries away I managed to put a knife into a small carton of cream so thinking "waste not, want not" I had a rather lovely dessert of meringues and cream tonight - and now guess who's feeling a bit sick!

I mentioned to André this morning that my yoga teacher would be sending me links to ongoing classes that I could do at home and would he like to join me? Nah, didn't think he would! Trouble is, the best place for me to practice is in my living room and I think that's where he'll be setting up office as of next week when he's back to work. I'm not sure he'll be wanting to see me attempting to do the "downward facing dog" though so I'm going to have to figure something else out!

Today again I was restless and chomping at the bit to get out so I told André I would run into town to pick up a few groceries. He said that he would like to take his car out for a run too so believe it or not I ran into town and got a bunch of celery and an avocado and he went afterwards and picked up some goat's cheese. If you add in the price of the petrol I guess that makes for pretty expensive groceries doesn't it! Dave mentioned on his blog how nice it was not to have to do a health check because he was off work, and I feel the same - I'm starting to get a pissy attitude about having to take a whole two minutes to download an attestation in order to leave home. It's silly really but I think it's the lack of control which gets to me, although I understand the reasoning behind it. I mean, it's designed to prevent people from going out and mixing as much as possible, so I guess I'll just have to put up and shut up! I did go for another walk today which did me good, although always walking in and around the village gets old. After my "strenuous" 45 minute stroll around the village and feeling the "need to rehydrate" when I got home, André just handed me a beer. I guess he's got my number huh!

In other news, the other week my friend came over with a thank you gift for looking after her house while she was in Spain. It was all closed up initially but has now started to flower and it is just beautiful!

Then after dinner tonight the film Outbreak was on TV. I enjoyed the film the first time I saw it but wondered if the timing of putting it on now was coincidental or not. It's very pertinent to today's situation don't you think. Scary stuff, and just getting worse, sadly!

And finally, the obvious closing thought has to be just the sheer relief that the elections seem to have been finally decided. Of course they're not final as yet but certainly looking like it. It was lovely to see people celebrating in the streets today, although I guess there were many that weren't! When I bash on Trump it's not because he's a Republican. I'm more liberal-leaning and would most likely have voted Democrat had I ever got US citizenship. No, I bash Trump because he's an odious human being, his latest statement issued today being just as ungracious as you would expect! So while I doubt that Joe Biden was the best person the US could have gotten for the job, and God alone knows what a horrendous mess he has to try to get a handle on (starting with the pandemic) I, like so many, am just relieved to think Trump and his toxic family will shortly no longer be front and centre stage. It's encouraging that Biden will apparently be naming his covid team on Monday, as that has got to be the most pressing issue, well that and a million others. I can only wish him good luck! 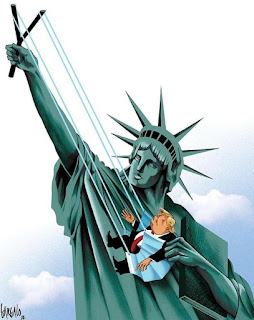