Time to get back in that saddle!

We're into week four of this lockdown and while the government said it would be "reviewed" on 1 December they're not giving any indication that much will change then, even though they've managed to bring the R number down dramatically to less than one. Trouble is, I guess, we can't keep going into a severe lockdown then lifting it and having people start taking silly risks and we get hammered again. Maybe there's a chance we might be able to start going to DIY places or garden centres - who knows, because at the moment all of those are off limits. And everyone seems to agree that it's much harder this time round, maybe because we're heading into winter rather than spring, maybe it's because ... who the hell knows anymore! We're just so tired of it!

I was doing ok with the walking but just like the last lockdown I resent the hell out of having to carry a "permission slip" on me every time I leave the house, being limited to how long I can go out and how far, so the walking just started dying a death here - which was silly because I know how much good it does me, however cold the weather. So tomorrow I'm going to get back at it and start trying to get a few things achieved round here too. Heck, I looked tonight and I've only got four miles to do to achieve my 1,000 mile goal, so if I give up now I might as well give up 100 metres from the finishing line right! I've also been pretty lax about cooking, not making much effort (although we eat of course) and housework too, although again we don't live in a pigsty. So tomorrow, as André is going in to Geneva to the office I'll try to get the house sorted and make something more interesting for dinner!

Then today I received an email from the André Rieu group to inform me that the concert that had been postponed from October to January (for obvious reasons) was now being postponed again, but this time until January 2022. So knowing that the friend who was going with me has serious health issues I decided to just write them back and ask for a reimbursement. I don't know what will happen, if they're allowed to hang on to the money for 18 months like here in France or what. We'll see. So I wrote to T and told him that I had asked for a reimbursement ($200). He responded saying he was having a hard time in this lockdown too, had been in a bad car accident (although uninjured thankfully) and was missing his new grandson. And then he sent me another email and said "you know what, if we get reimbursed why don't we just give the money to a charity of your choice"! Isn't he great! So I replied and said that was a wonderful idea and that I donated to the local food bank every week and had given them money before so would he agree to that? It'd be a nice gesture (and frankly pretty typical of him)!

Then, in an effort to get more forward motion going, I went online and bought the pattern for a bag that Jen had told me she liked ages ago. I seem to have lost my sewing mojo and when I hear about what others are achieving I could kick myself. I know you can't be "up" all the time but you've got to start somewhere haven't you!

And finally, I saw that our FB walking group has a subgroup aimed at walking to lose weight so I joined up. Again there are no rules and you can go as fast or as slow as you want, but people are getting impressive results. Heck even half a pound a week would give you 26 pounds wouldn't it. Apparently you send in your weight loss (hopefully) to the lady that runs the group (and only she sees it) and she keeps a tally, so I'm going to start logging that in January along with my walking miles again, as I obviously ain't capable of doing it on my own. So with a view to hopefully getting off to a good start I've decided to see if I can go "wine free" until Christmas. Admittedly the wine has been flowing rather ... ehhmmm freely these last few days, so here's hoping! 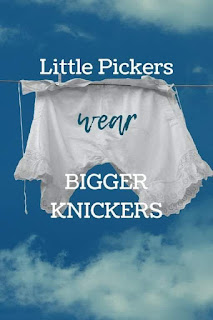