Do they ever just go gently into the night?

So André and I have almost completed two weeks of lockdown together and it really has been ok. He has to work anyway so I just do my own thing and he does his. Yesterday he was complaining that his feet were cold while he was working so I mentioned that I had bought a pair of slippers that you can heat up in the microwave and did he want to give them a try? Ha ha, with his baggy sweat pants and steam coming from his slippers he looked a real sight! I don't know if I mentioned it before but he actually works for the World Health Organization (in one of the units dealing with covid, no less) and when I commented on the difference between what he looked like and what he was working on he just said "WHO, here to help"! Actually I was able to help him a couple of times because he has been trying to put together large documents for publication and since that was what I was doing before I retired I've been able to help him figure things out on occasion - or at least stop him from pulling his hair out! This morning I told him to bring his washing down as I was throwing a load in, and when he emptied the pockets of an old jacket wouldn't you know he pulled out an envelope containing $700! He reckons he hadn't used that jacket since he and Lily were in Korea and hadn't realized he still had that cash hanging around. I swear if he fell in a barrel of sh*t he'd come up smelling of roses that one!

Then yesterday Max sent me a message to say he was coming over to take another look at my water heater. Found out later that André had bought him some tobacco in Switzerland (apparently it's cheaper there) so now I know how to get Max to come over a bit quicker! He switched my water heater back from the old electric system to the fuel system and when he came back into the house he showed me a tiny rubber washer, about the size of a ring, that had a cut in it and he thought that was where the leak was coming from. All that damage from such a little washer! Anyway, he's coming back over in a couple of days to check it out and put everything back together so (hopefully) that has now been sorted! Then yesterday my nephew sent me a message to ask if he and his girlfriend could come out next April (covid-willling) because flights to Geneva are currently going pretty cheap (the prices will soon go up again if lockdown is lifted and the ski season starts). I told him to go ahead and book because I can always work around them if and when, and you know, it actually lifted my spirits a bit making plans for the not-so-distant future! Fingers crossed!

I've been pretty good about going out on my (limited) walking escapades and as my yoga teacher sent round a link to a 90 minute routine I also gave that a shot yesterday, although it's not as good as doing it in person. As I was coming home from my walk today my neighbour's daft old dog came down to the mailbox to greet me, and then started to follow me home. I turned round and very sternly told him to bugger off because he wasn't coming with me - but as you can see he took no notice and just rolled over in the middle of the road waiting to have his belly scratched! I have to say I'm a sucker for that old dog!

In other news, about 18 months ago I discovered a US blogger that I quite liked. Her blog was called something like "adventures with D" or "retirement with D", but the more I read I reckon it should be called "rollercoaster ride with D". She's pretty abrasive but I quite like her all the same, and she talks sense for the most part. She had a previous blog which she took down for some reason but I see she's back again now. This is a lady whose father came to the US from Europe as an impoverished immigrant, made good on the American dream and she inherited around a million dollars when he died. With that she was able to buy a place in a wealthy part of the US and start her own business which, unfortunately, went bust in 2008. Her house saved her because she was able to sell up and buy something cheaper. Then along came another business, then another bankruptcy - and she's a real rollercoaster to follow. Last week I thought she'd closed her latest blog down but now I see it's back up again and on Saturday she was going to divorce her husband because "just look at how messy he leaves the kitchen"!!! Now (or at least yesterday) she was going to apply for a European passport and move permanently to that country because "America's a shithole and people are awful and now that Biden's been elected we're all going to have our property taken off us, and if we do have gardens we're gonna be told what we'll be allowed to grow, and the state and big business are gonna be listening in on every aspect of our lives"! Wow, but you know what D, they're already doing that. Just the other week John over at Going Gently wrote that "alexa" (Amazon) wished him "good night John" one night and he swore he'd never mentioned his name when setting it up. And André and I were looking at beds on the IKEA website the other day and now that same bed keeps popping up every time I open FB or a news site! So ya see, we're already being spied on and I'm not sure how keeping the orange buffoon in power in the US would change any of that - you know the guy who looks like he's becoming more of a national security threat himself as each day passes!

And what is it with these wealthy/powerful/important men who can never let go? A couple of years ago I remember seeing a retired former, very highly placed colleague in my local supermarket pushing round a shopping cart with at squeaky wheel. Now this guy was an internationally-known person and would have been featured in the newspapers, although not particularly prominently, and here he was pushing his cart around just like every other unimportant person. Just like Rudy Giuliani! How did he go from being "America's mayor" to the caricature that he is today, having an unintentional staring role in the new Borat movie and then ending up giving a press conference outside a garden centre located between a crematorium and a sex shop (although they would appear to be fitting book ends for Giuliani)! 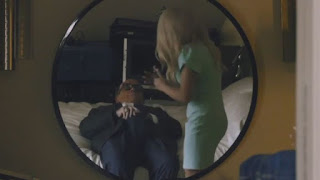 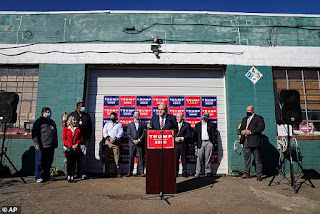 When is enough enough for these people? I know money is a big factor, but when you're a multi-millionaire (or at least pretend to be), don't you have enough? How much more do you need? But I think it's about more than just money for them. It's about power for sure, but I wonder how much of it is about "staying relevant". They don't seem capable of just going gently into the night and enjoying what's left of their lives while they still can. Or maybe the thought of walking round a supermarket pushing a cart with a squeaky wheel is truly more than they can bear!