A language lesson for the neighbour!

My neighbour knocked on my door earlier this evening to ask if I had any star anise and cinnamon sticks as he wanted to have a go at making mulled wine. I had both (I've got most things as I'm a spice-a-holic) but it brought back memories of this time last year when we went to the Christmas market in Alsace and got to drink mulled wine while walking round. Making it even better was that you could actually buy hot white wine, and since that is my absolute favourite it was just heavenly - all the more so because of the wonderful aroma. Not that any of that has happened this year of course, but it's nice to look back over my blog and see what we were up to. And talking of white wine, I'm up to almost three weeks without touching a drop and believe it or not I haven't given it a second thought. Just proves, I guess, that opening a bottle was simply a habit that needed knocking on the head a little!

When I wandered over to my neighbour's to take the spices she invited me in for coffee and while I was there the house phone went. She made the mistake of picking it up just a bit too quickly because next thing I heard her giving some poor bloke on the end of the line a piece of her mind, saying she "thought that with lockdown we could at least be spared, just for a few weeks, from having your bloody religion pushed down our throats"! Jehovah's Witnesses then! Actually I hadn't realized that one of the few positives of lockdown was that we would not have them ringing the doorbell for a while! And yet, when I got back home, my own phone went and since the number was withheld I just let it go to answering machine and lo and behold I get a message urging me to check out this wonderful website (www.jw.org, if you're interested) to "cure my depression in these difficult times". Hey buddy, I'm not depressed, but I may well end up that way if you lot don't bugger off and leave me alone!

Then I got a message from Jen sending me a picture of the latest baby scan, with a full-face "can you see me looking at the camera" image which was just lovely. I didn't say anything but I seem to have also counted six arms but that may just be my eyesight! Still, it was lovely! She then told me that her mom wanted to know if we wanted to go up to a local ski resort called Les Gets on 19 December (assuming lockdown is again eased on 15 December) to see the Christmas lights, so all being well we won't totally miss out on a little Christmas cheer this year, even if it's not exactly a long weekend in Alsace!

I'll have to check though to see if we need snow chains. I have winter tyres on my car but if we also need chains I'll have to run out and buy some as I'm pretty sure the ones I have downstairs don't fit my tyres!
On a side note, just a quick shout out to T'Pol to say that so far I've gotten rid of 30 items of clothing. I still have a way to go (and it's getting harder) but three bags of clothes have already gone to the charity shop. When I look at some of the things I put in the bags my only thought is "what on earth was I thinking"!
And finally, it started snowing quite heavily last night so the snow plough made it's first run out in the village and we had a decent covering this morning. Decent enough to need shifting with a snow shovel anyway. I spent two hours out there clearing my driveway (and starting to clear the communal bits) before my young neighbour came out to give me a hand, followed by his dad a bit later. And I was knackered! We were just about done and starting to put our shovels and salt buckets away when there was an almighty "crack" and all the snow on one section of my roof gave way and slithered down onto my driveway. Which was when I let out a loud "oh sh*t, damn and blast", and that was when dad said "and that, my son, is how you say 'dearie, dearie me in English - or words to that effect"! Time for a little hygge I think! 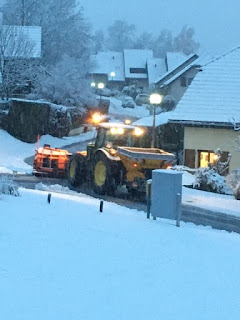 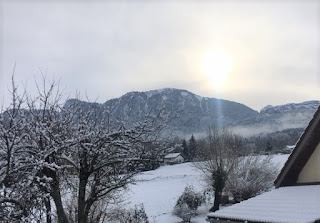 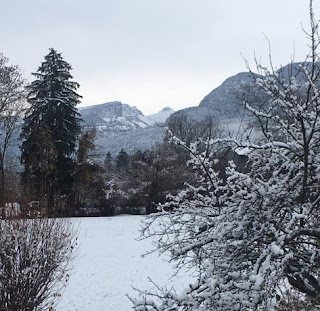 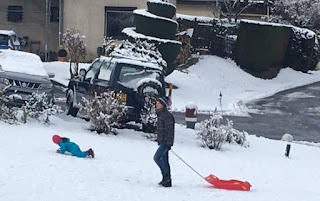 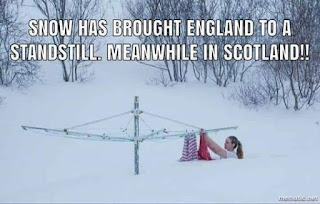