Well at least one of 'em's useful!

I just happened to stumble upon a programme called Wartime Farm Christmas the other night and it made really good viewing. Obviously in Britain during the war food and resources were in very short supply so the programme had them recreating the ways people coped. Rabbit - which the "posh" people had turned their noses up at previously - became a staple, combined with 1,001 uses for potatoes and carrots, because there wasn't much else available in the way of vegetables. They showed them making beer out of potatoes (smelly but good, apparently), using matchboxes to make furniture for a doll's house as a Christmas present and making Christmas decorations out of old newspapers.To show them eating their "Christmas dinner" they filmed inside Chiselhurst Caves near London, which provided sanctuary for around 15,000 people per night during the bombings. I found it so fascinating I might buy the book - but then again, since I have goodness knows how many books to read already maybe I should just put it on my wish list (edit to add, it's not a book it's a dvd)! 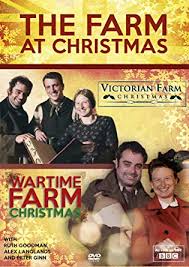 One of the books I'm reading at the moment (I usually have a couple on the go at once) is called Round Ireland With a Fridge, by Tony Hawks, and it's just as daft as it sounds. On a drunken night out with a mate in England Tony accepted a bet from his mate, Seamus, that he couldn't hitchhike around Ireland with a fridge. Drunk as he was, he accepted. I mean he must have been really drunk because the bet was for £100 and the fridge alone cost him £130!!!! I haven't gotten very far into it but it's well written and very silly. I don't know when it was written but there were obviously still "tensions" between north and south and at one point he needs to take the road to Donegal which, apparently:
"... dipped in and out of Northern Ireland, and I was anxious not to find myself hitching in that part of the world. Apart from the fact that I'd been told that drivers rarely stop for hitchers there, I was conscious of the interest a small white container might hold for the security forces. Of all the romantic and heroic ways to leave this world, being part of a controlled explosion with a large kitchen appliance rated very poorly." (taken from Tony Hawks' Around Ireland With A Fridge). 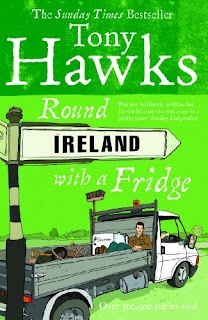 It's very daft, but I have to admit I'm enjoying it immensely.
I saw in the news the other day that for the first time ever UNICEF has donated money to the UK to help feed children. It's not a tremendous amount in the grand scheme of things (£25,000) but I guess it shows just how bad things are (for whatever reason) in certain parts of the UK. Whether or not you believe feeding poor children is the responsibility of the government (it is if the parents can't do so), either way that money was very welcome apparently. But then you get dickhead politician Jacob Rees Mogg making some snide comment about how UNICEF was using that donation to score political points and it wasn't appropriate. Yeah, this from an AH who is apparently worth over £100 million and likes to lie down when he's "working" in Parliament. And these are the people who are "running" the country? God give me strength!
My new oven was delivered the other day but since my old oven was attached to the electrical wiring by a domino and my new oven came with a plug the delivery guys wouldn't touch it so they just put the oven on the floor of the kitchen and left! So that left me faffing around trying to get a plug onto the old wiring and then trying a small mixer to see if I'd got it working. I hadn't, and I was starting to panic a bit about how I was going to make Christmas dinner with an unplugged oven in the middle of the kitchen floor (ham sandwiches anyone)? So as Jordan is off for a few days he came over and soon figured out where I'd gone wrong and together we lifted it into its spot and voilà, I'm the proud owner of a brand new oven, which seems pretty easy to use, having tried it out for the first time tonight. So then I asked him if he could take a look at a couple of electrical sockets which were starting to pull out of the wall. I've an idea they were the original sockets from when we moved in and I guess over time they'd started to come loose. So in a couple of hours he went all over the house and tightened up and secured every single socket in the house. It was such a relief and I realize it's things like this that have been getting me down lately - the kinds of jobs I can't do myself and you can never get anyone to come and do for you. When I told Jordan I'd been thinking of trying to hire a DIY guy for the entire day he said he didn't think I'd get one even for a full eight hours because what they actually want to do is sell you the parts - that's where they make the money - not on the labour itself! Damn, I'm so glad I've got him to help me out. Now compare that to André. He's been complaining for a couple of days that there's a loose nail sticking up at the top of the stairs and he keeps catching his foot on it. So as he was going upstairs I handed him a hammer and told him to just hammer it back down. Bang, bang, bang and it was fixed. Then when I asked where he was going he said "to lie down because I'm exhausted"! Ha, I knew he was joking but I tell ya, sometimes I think he's neither use nor ornament that one!