I was in a bit of a funk last week. Well a lot of a funk actually. Didn't even go grocery shopping (if you can believe it), so yeah it was bad!!! I know it's normal and I realized the state of the house was getting me down big time. André has been very good while he's here but he seems to have these ruddy great boots that just drag muck through the house every time he breaths out, and as for cutting a baguette, well he seems to religiously miss the board or the bin and all the crumbs get strategically scattered all over the floor every time. I shouldn't knock him because he really has been no problem at all - and I knew it was just a normal funk. What I did eventually have to acknowledge, of course, is that I still want to get rid of so much crap in this house and I really don't think it was fair that I got all my ex's crap dumped on me with five days' notice to "get rid of as you will"! Yeah, thanks for that!
Still, I just received a Christmas card/letter from my former boss and I think he wrote very well about the current situation (he always had a way with words). They are both British and when he retired they moved back to the UK - to a beautiful place in Edinburgh. I'm pretty sure he didn't want to move back though - I think it was more his wife's idea, but they seem to be making the best of it - enjoying it actually, after so many years living away. It helps that they have more than decent pensions and can come out here pretty much as and when they want (I mean, who else can afford to get "trapped" by the pandemic for five weeks in Zermatt in spring without too much hassle (it's beautiful but very expensive)?
He made the very valid point of just how beautiful Edinburgh was without the crowds, the traffic and the noise, and how nature started assuming it's (rightful?) place again, with birds expecting you to step around them! They found plenty to occupy themselves and seem to be doing okay during this bloody pandemic. Then of course there's Brexit coming up (will there, won't there be a deal)? They were both very much against Brexit and he wrote about how they were trying to deal with the aftermath of a decision they were against and in which they, like me, had no vote. So now, while they are disappointed, they're dealing with it - have to don't they/we! They're even talking of food shortages in the UK, but I suspect there's an awful lot of brinkmanship going on on both sides! I just hope Boris is up to it - it remains to be seen!
In other news, the French lifted the strict lockdown today. No more permission slips needed to leave home, we can cross into other départements and so on so it feels, yet again, like we've regained a little freedom. However, we are still going to be subject to a curfew between 20h and 6h, the only exception being 24 December (since that's when the French really celebrate Christmas). That kinda leaves me in the doodah because everyone is coming to my place on Christmas Day and it looks like it'll be an awfully short-lived celebration then, with everyone having to be off the roads by 20h! They're not even giving anyone a break for New Year's so I think my kids will be going to a friend's house and staying overnight. Cinemas, restaurants and gyms will hopefully get to escape from purgatory on 7 January, as well the ski lifts/slopes. It's hard on them getting to miss out on the Christmas/New Year trade but people are being very strongly encouraged to go snow-shoeing/cross country skiing in the resorts. They just don't want the crowds around the ski lifts!
Then tonight I received a note from the administration of this région (Auvergne-Rhone Alpes) to say that as from tomorrow there will be free covid testing for anyone that wants it and giving the address of the locale in my town! Very efficient I thought. I'm just hoping I never have to use it!
I did get my tree up last week, despite being an "ungracious shrew" at the time, so at least that's done. I also got some cleaning done and put away a shedload of things on the bathroom vanity. It looks better already. I think my problem is I want everything done now, so I charge in like a bull in a china shop, wear myself out and then just give up! I think André could see I was in a funk so I told him, "just look at all these bloody CDs I got landed with from your dad and now it's my problem to get rid of them"! There must be over 200 left being very un-feng shui around my house and they are driving me nuts because I just don't listen to them. Plus an awful lot of them are country music and I honestly don't know any French people who are interested in hearing someone sing about the farm, the truck, the train or mamma! Luckily André stepped in and said to give them to him because while country isn't really his taste either he said he would have fun going through them when he gets his own place (he should sign on Thursday). I'm so glad because I don't think anyone wants CDs nowadays and I felt bad about throwing them away! 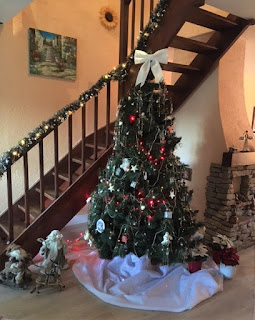 I don't quite know how we got on the subject but I was telling him about one time my ex was singing along to a John Denver song - "and so he talked to the fish in the creek" - and I burst out laughing because I'd always wondered what the fish were doing in the trees in John Denverland!!! Then I told him about my ex-BIL who used to sing "home, home on the range, where the deer and the cantaloupe roam". So then he told me couldn't sleep last night (I know, I heard him roaring laughing and I knew he was listening to Peter Kay). Peter Kay is a very funny comedian from the north of England and an astute social observer (i.e. he can take the piss - albeit kindly - out of anyone)! So, André had me watch this sketch about misheard lyrics and it's hysterical. He might not be that easy to understand to anyone outside the UK but just look at the crowd's reactions. He's a gem!
Posted by Treaders at 17:04