I've spent a few days offline over Christmas so I'm only just now starting to catch up on all my favourite blogs. While it's been a strange and unpleasant year for most people I hope that everyone got to enjoy at least some parts of Christmas with family and friends. The kids came to me on Christmas day and it was really nice, except I managed to massacre the Yorkshire pudding again. Think I'll have to give up on that one, which is a shame because my kids love them. Jen and Jordan have been looking into the local day-care for the baby and she was telling me that they might be stuck for the month of July as the day-care can't take the baby before September. They are going to take August off anyway and that works out well because the day-care closes for the whole month, so Jen asked if I would be willing to step in for July (would I????). They know I'm not ready to do full-time baby-sitting because I feel having worked for over 40 years this is my time now. But of course I'll help them out whenever they need me, if the baby is not well or whatever. So the plan looks to be Jen will drop down to 80% work and take Mondays off and I will take care of the baby on Fridays so that will mean only three days a week of day-care. Sounds good to me. When I was going through stuff in my basement the other day I came across a bag of baby things that I had hung on to. I found the sweetest baby jackets that my mom had knitted for me when I was pregnant with André, so I washed them and showed them to Jen and she has taken a couple. Now to be honest, they're incredibly old fashioned - heck they were old fashioned 33 years ago, but I kept them and put them on both babies when they were new born for a while. Obviously you can't put them in them for too long but it would be quite sentimental to me to see the baby in one of them at least once! 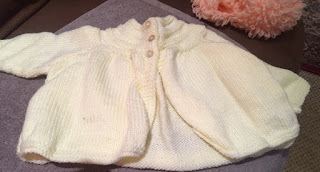 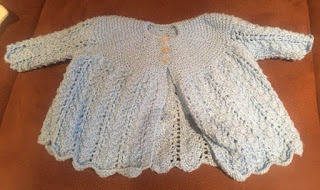 In other news I've signed back up for the "Walk 1,000 Miles in 2021" challenge. I want to give it another go with (hopefully) this pandemic being kinder to all of us. Who knows, maybe I will aim for 1,500. That might be pushing it a bit but I'm pretty motivated (but then aren't we all on New Year's Eve)!

It's cold and pretty bleak here at the moment so I haven't exactly been knocking all those things off my "to do" list lately. But the other night I actually sat and watched a programme called something like "Christmas at the Castle" and they were filming at Highclere castle, which was the location for the fictitious Downton Abbey. They have a staff of about 35 and were showing how they organized everything getting it ready for the Christmas tourist season (covid willing - it was, luckily for them). While I have mixed feelings about so much wealth being in the hands of so few people, I have to say everyone worked really hard - including the owners - the Earl of Carnarvon and his wife - and they all seemed to be such a nice, cheerful group. It certainly brings home to you though just how hard they really do have to work to generate the income to keep these places running!

Next week, apparently, they're showing the filming at Warwick castle, which I really would like to watch having grown up just down the road from it. It was funny really because when my husband's family came over from the States for our wedding we took them to see it, and my dad was saying he had spent the last 60+ years living right next door and had never visited it. But then, isn't that always the way!

And finally, just when I thought I had done all my Christmas shopping I spotted these masks and just had to get them as stocking fillers. The boys and I decided to model them - I'd say natural good looks run in the family wouldn't you! 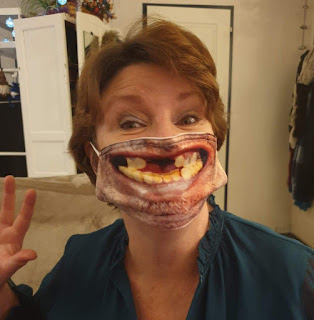 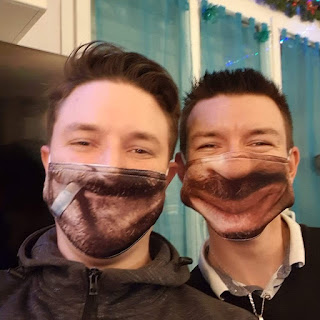