I'm so glad my neighbour set up our little Whasapp group for a few of us to meet up to go walking. I've been out every day this week and am loving it as I love walking in the cold weather. Today we ended up plodding through the woods for around 90 minutes. Don't tell Mr. Macron as it's supposed to be for an hour or less, but as my neighbour couldn't keep up we ended up taking longer than we thought! It's been cold and sunny, if a little foggy early in the day but that soon picks up and it's just perfect to my mind. And would you believe it, on 19th November I actually passed my 1,000 miles in 2020! I'm dead pleased because it hasn't been easy with all the restrictions. Since I knew I'd make it I sent off for my medal and certificate a while ago - and I'm going to hang the darn thing on the wall right next to the cycling proficiency certificate I got when I was seven! 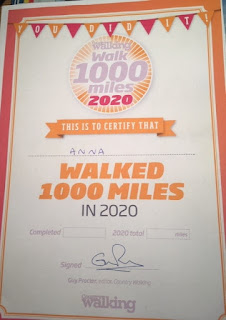 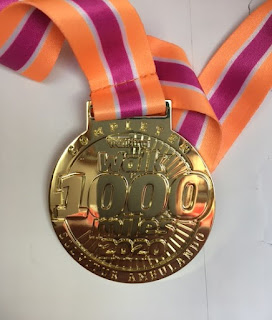 I wore my medal to go out walking with my neighbours today and they cracked up laughing! 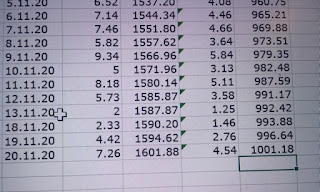 It's just a bit of fun really but I'm definitely signing up again next year and maybe aiming for 1,500 miles (2,000 would be wonderful, so who knows)! As I was about to head out I mentioned to André that it's around this period that the firemen stop by to sell their calendars for next year and if they did happen to come by while I was out I always leave cash in a bowl by the front door just in case. It's always one of the local lads that knocks on my door and he's an old friend of my kids. So I told him if "Zoreille" ("Ears") knocks, to take that cash and buy one off him! I think he's kind of hoping Zoreille does stop by because they haven't seen each other for years!

There isn't much on TV that interests me at the moment (or ever really) but last night I was watching Saving Lives at Sea, which features rescues carried out by the RNLI (Royal National Lifeboat Association). They are my favourite UK charity, are self-funding (because they want to organize themselves as they see fit) and manned by volunteers. Well last night they featured an incident where an idiot had gone out surfing during Storm Ciara and got into difficulty. The Hastings' lifeboat was launched and after over an hour searching in horrendous conditions they got word that the surfer had somehow washed ashore some six miles down the coast. All well and good for him, but then the lifeboat had to try to get back ashore during a storm and avoiding an approach to the beach that was known as "the washing machine"! It was stomach churning to watch their attempts to get back to land, and at one point a massive wave knocked the boat onto its side - and all this while the men were wearing bodycams and we could see what they were experiencing! Thankfully the boat righted itself and they ended up making it safely to the lifeboat station in Eastbourne. They made me laugh though because at the end they said the reason they were desperate to get back into Hastings was because they knew they'd have a cup of tea waiting for them!

I mentioned recently that I've finally signed up to Netflix and have started watching The Crown. In the episode I was watching last night the story developed around the 1952 "pea souper" smog that hung over London for three days killing thousands of people. Using Churchill's inability (or unwillingness) to deal with this crisis (remind you of anyone?) they tried to introduce a vote of no-confidence to oust him. Britain is often foggy (I'd say that's an understatement) but a convergence of unusual weather conditions and the fact that most people heated their homes using coal meant that the acid smog was basically trapped over the city and many thousands of people died. They refer to these fogs as "pea soupers" and at best they are depressing. At worst, as they saw, they can be deadly! Mind you, as André said after having been to Delhi, we in the west have nothing to complain about compared to some parts of the world where you can actually taste the sulphur in the air!
The 1956 Clean Air Act was passed as a result of this incident, but even so when I was growing up these were pretty normal. I will never forget one time, though, when I must have been about 13, we had the densest pea souper I had ever experienced and to top it off all the street lights were out. I remember having to walk the couple of miles from the school bus back up to home by feeling my way along hedges and railings in the dark, dark fog. I knew that route inside out, of course, but it was so scary nonetheless! Not that you would have guessed it by my mom's reaction, which was more or less "oh there you are, what took you so long?" but then, as Bill Cosby used to say, "our parents walked five miles to school each day, uphill, both ways", but I do remember being so frightened! We were asked to write a story about it in school shortly after that. What I wrote was crap but my friend wrote a beautiful short story which ended with "and a blind man walked me home"! She went on to become a teacher, as you might imagine!
In other news President Macron went on television last night and since the rate of infection is heading in the right direction he will cautiously allow all shops to open as from this Saturday, although attestations will continue to be required and masks, of course, remain mandatory. The big difference as far as I'm concerned is that we can now travel up to 20 km from home to exercise and can take up to three hours to do so. It's pretty selfish that that's what I'm concerned about but .... Then, on 15 December, if things are still going in the right direction, cinemas and so on will be allowed to open up, although gyms, restaurants and bars will remain closed at least until 20 January!!!! I guess it's a start and much as I hate it I do feel he's right to be more cautious this time round, however much the French call him an idiot who doesn't know what he's doing! Frankly would any of you want to be responsible for making that call? I know I wouldn't! He also stated categorically that although the vaccine should be available shortly there will be no mandatory vaccination. Thought as much, although how any (democratic) government could force over 60 million people to be vaccinated is beyond me anyway. Just scaremongering I guess!
Like everyone else's I'll be glad when (if?) we can get back to a more normal life and am really looking forward to next spring. That being said, I took some stuff up the garden to my composter and when I came back to the house I caught sight of myself in the window. Damn! The legs of my sweat pants had ridden up over my socks and I looked a dead ringer for Eminem! Ha, I always thought his name was "M&M" so I did wonder who "Einaman" (as I called him) was that I read so much about in the papers! I put André's baseball cap on sideways and fished out my 1,000 miles medal and André burst out laughing. I think it's time I got out of these four walls before I go completely insane! 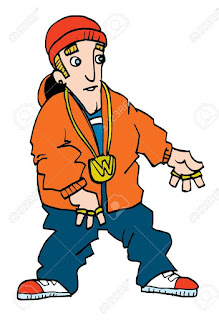