While I was over at Jordan's yesterday I told him that I was going to start looking at bathroom fixtures as my plan is to get started on refurbishing both bathrooms as they desperately need redoing. I had asked Jordan if he was interested in doing the fitting in his spare time and he said yes. I was fine if he didn't want to but would obviously prefer to give him the money than pay someone else. So we got to talking about what kinds of fixtures I should be looking at and I was saying I wanted "suspended" toilets with eco water consumption possibilities since my current toilets are very old and very heavy on water usage. I'll always remember my friend, Ian, who moved to Bulgaria in 2010. He was sick to death of England and chasing after the almighty £££ in order to consume more and more, thereby trapping yourself on the eternal money-chasing treadmill. Anyway one thing Ian said that stuck with me was that it just appalled him that we in affluent western countries actually use clean water to flush our toilets - simply because we can afford to do so. Ian was in construction in England so I guess he knew a thing or two about "wastage", but it's odd that that sentiment always stuck with me. So why am I talking about toilets? Well at this point Jordan piped up and said that his boss, Max, (who is also the bass guitarist in their band and a friend of both my sons) had actually installed a urinal in his home!!! And that urinal used only one litre per flush, as compared to 5-6 litres for modern toilets, and between nine and eleven litres for my old bog! Fascinating stuff isn't it, although I don't see much of a future for a urinal in my home, to be honest. Max bought a run down old farm on a fair bit of land and started doing it up over the last few years. Jordan helped him at weekends and learned a lot in the mix. Another thing Max did is have his home set up so that the ground floor could be used as a completely independent living area if the time ever came that he couldn't get up the stairs. Now he's only 31 so hopefully that's not even a consideration but he was also smart enough to install doors that were wide enough to accommodate a wheelchair, as he wants this home to be his forever home. Now the point of all this is that Max has recently become rather smitten with a young woman who is tetraplegic as a result of a car crash involving a wild boar (!!!!) and things look like they might be getting more serious! He said she is gorgeous, very funny and fiercely independent and while it's early days yet who knows where that relationship might end up. But isn't it amazing what a forward-thinking young man he turned out to be!
So jumping from the rooster to the donkey again, today I had my Monday morning yoga class but was a bit apprehensive because I didn't fancy doing it outside in the scorching heat. While I was in the shower getting ready I heard a clunking sound and thought "oh my god, someone's on the roof" (my shower is under the roof and I'd been tootling back and forward naked while getting my clothes together to go to yoga)! Turns out the chimney sweep had come to work on my neighbour's chimney. Hopefully he shouldn't have been able to see into my house, but I guess it wouldn't be the first time they've got an eyeful would it. A bit like the window cleaners when I lived in England. They just showed up, climbed up their ladders and off they went, so you'd better hope you weren't stark naked when they started on your bedroom window! Yoga turned out just perfect though. It was already pretty hot but we were able to practice in her garden in the shade of a massive cedar tree and apart from one lady getting shat upon by a bird in said tree, it was actually lovely!
After yoga I thought it would be nice to go out walking but didn't want to go on my usual walk down to Thyez as I wanted something a bit more challenging (but not that challenging)! So I set off in the direction of the Lac de Roy, which is a small lake in the mountains up above a ski resort called Praz de Lys. I'd heard it was only about an hour's walk and not very difficult so I thought I'd have time to fit it in after lunch. Only problem was I'd forgotten to pack anything to eat so I decided to treat myself to lunch in a small town about half way there - which was a real treat as I don't do it very often nowadays!
I guess I set off up to the lake at around 1.30 p.m. and it wasn't too bad a walk, although every damn time I end up feeling like my lungs are on fire within about 10 minutes! Once I get into my stride it's fine, but those first 10 minutes are pretty miserable. Before I left I fished out an old sun hat that had a flap to protect my neck so I reckon I must have looked a bit like Beau Geste by the time I finally made it to the top! 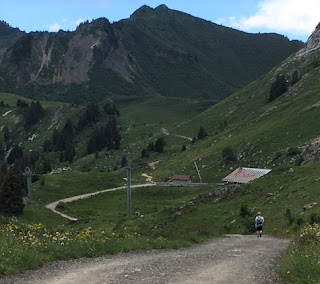 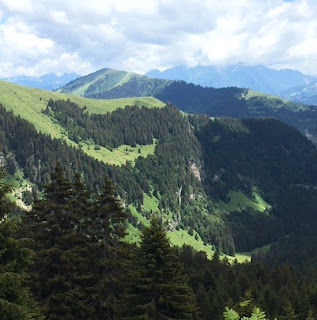 The air up here was cooler with that still quality you get in the mountains and the dunk dunk of the cowbells. I had just gotten to the end of the lake and the cows were coming over to pose for a photo when all of a sudden I got a video call from André who wanted to run something by me. Last night he received another email from Lily. It was a bit "rambling" to my mind, but then I guess they have different styles of expressing themselves. French is a bit "flowery" and they can go round and round before they actually say what they mean, whereas English is direct and to the point - which is why it's the world's number one language for business. Anyway Lily's email just served to confirm to me that there really are no "issues" as such in the marriage, more a feeling of restlessness on her part, as she was talking about "being tired of thinking about everyone else and wanting to put herself first for a change". What can I say, I guess we all get restless too sometimes, but as André said, he just wished he didn't have to pay the price for her restlessness. There was one passive-aggressive dig at him so he wanted to run his reply by me before sending it as he knows I will always tone it down. Actually, what he replied was excellent. He's naturally very diplomatic anyway but direct and to the point. His intention would never be to hurt her but like me he's straight-talking. So the long and short of it is that he wrote back saying that he was hurt by the fact that she encouraged Pete, the photographer, after he told her he had feelings for her at the end of May (yes, it's that recent). Pete will never be a friend of his again and he was not prepared to give her the summer to "figure out her true feelings", but wanted to just go ahead and file for divorce since he didn't know if he could ever trust her again! So there you have it. He's going to move his stuff out of their place during his July vacation and push forward with the divorce. I admire him actually and told him that if he sat around moping like a sad-eyed puppy she would have no respect for him, but pushing ahead and kinda saying "don't let the door hit ya in the ass on the way out" might be the wake-up call she needs. Maybe she will realize what she has to lose - or maybe she won't! Sometimes that's when they come running back but he isn't counting on it and I think now genuinely not looking for that either. Still, it's sad, but what can I say. So as I was saying, I was just about to take the perfect picture all up close and personal with the cows and the bloody battery on my phone died as a result of talking to André. I must have looked like one of those yuppies - you know, the kind who can't even put their phones away at the top of a mountain pass, but just this once I'll take the hit. Either way I'm going to drive over and take André to lunch on Friday but I'm already reassured that he's coming out fighting and looking better than I expected. Add to that that I got in over 13,000 steps today and feel like I could crack walnuts with my bum cheeks, all in all I would say it was a day well spent!
Posted by Treaders at 22:12