Think I'm in the doghouse!

So the Swiss/French border (and as far as I know the French/Italian border) opened up yesterday and it feels like such a relief. Not that I crossed the border first day or anything but just knowing that I can is a great feeling. I have a few doctors' checkups that are now overdue so it will give me a chance to catch up on them. I lived in Switzerland for a total of six years so I've tended to keep my specialist doctors in Geneva, even though it's more expensive than in France. Trouble with France though is you can wait six months for an appointment, hence the decision to just stay with Switzerland. On Thursday night I'm going into Geneva for dinner with an old colleague, so now I'm all excited to be (a) crossing the border, (b) going out to dinner like a real grown-up, and (c) with a man!!! I know. It'll feel like Christmas and my birthday all rolled into one. Well actually just being able to speak face-to-face with another adult will already feel pretty good, to be honest!
I was reading the local Swiss news this morning and see that there are already articles in the paper about Geneva residents crossing into France to do their grocery shopping. Of course there are always the snide comments about "they come over here and take our jobs" and the reverse comments about "so you don't want us coming over there 'taking your jobs' but it didn't take you too long to come over here and do your grocery shopping did it!", but for the most part I understand it. The Swiss franc and the euro are not quite at parity (but for the sake of argument let's say they are, and the Swiss franc is pretty much 1:1 with the dollar), but one guy was saying that even shopping at ALDI or LIDL in Geneva he would spend SF 250 for a shopping cart full and here in France he would get a fuller cart for €150! So you can see why they would do it can't you! The bigger shock for me, though, was when one lady said that rump steak in France is €25/kilo and in Switzerland SF 72/kilo!!!! Wow! I've always known Switzerland was expensive and indeed spent a fortune grocery shopping for the three of us when we lived there, but I guess I'd forgotten quite how expensive it is!
In other news, I've been following the story about 22 year old Marcus Rashford, the Manchester United and England football player, who wrote a very eloquent letter to Members of Parliament imploring them not to stop the free school meals programme for poorer children when the official school summer holidays begin. Apparently he has been working behind the scenes for quite some time helping to raise £20 million to support food banks and help fight child poverty. The government had been continuing free school meals to eligible children during lockdown but had announced the end of the scheme for the summer holidays. Marcus took it upon himself to write an open letter to MPs imploring them to maintain this programme. As the child of a single mother who worked full-time but only earned minimum wage he stated that the free school meal was sometimes the only meal he had some days growing up as a poor kid in Manchester. And guess what, the government have backed down and will be continuing the free meals programme throughout the summer. Well done Marcus!
On Saturday we had our latest board game evening at my place. We discussed beforehand whether we wanted to meet in person or via Zoom again and we voted unanimously for "in person" as there are no longer any restrictions in private homes. There was no "social distancing" as such because you just can't do it when you're all seated around three tables but we were all comfortable with the set up. Initially we were supposed to be 10 but then Adeline asked if she could bring her boyfriend so we ended up being eleven but that was fine. Yet again the food was lovely and I was really pleased with the way my spinach and ricotta-stuffed cannelloni came out. My photos aren't very good (I really should use my camera instead of my phone) but we had a lovely time with everyone leaving around 2 a.m.! I then stayed up till about 3 a.m. just tidying up and running a second dishwasher load, but yet again we had a great evening and the fact that the younger ones are asking to bring their friends means we must be doing something right! 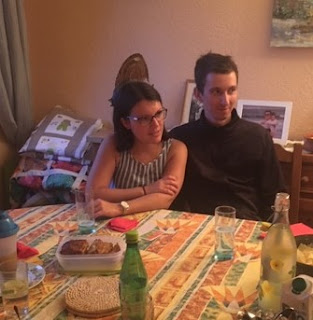 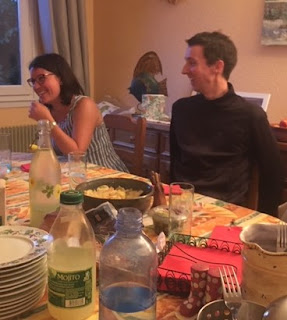 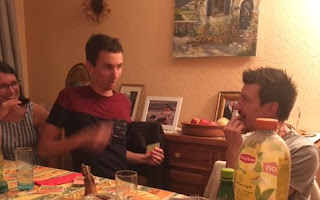 Then tonight my friend called and we had a bit of a chat. I told him that we had been 11 at my place on Saturday night so he pretended to be all outraged and said "but what about me, why wasn't I invited?" I just told him I knew damn well he wouldn't come because he's an anti-social bugger, and that even if he had been here when everyone arrived he would probably have just gone upstairs to watch TV! To which he replied that that was nonsense (it isn't) but it was good to know he was one of my 11th-20th best friends and therefore outside my social circle of "10 best friends"! So yeah, somehow I think I might be in the doghouse again!
Posted by Treaders at 21:32