Yet again there's not an awful lot going on here at the moment - or maybe it's just me that's run out of steam for a while because I'm not achieving very much. Who knows. It does seem like everyone and his uncle is ringing my phone and doorbell at the moment trying to catch up with stuff but other than that it's pretty quiet. Well over here at least - unlike the violent scenes in the US right now. What can I say that hasn't already been said? But the really sad thing to me at least is that I don't think George Floyd's death will be the last one. It never is is it, and that's what's so tragic!
In other news, the telemarketers are back at it again and the other day I made the mistake of answering my mobile to a telecom company called Free trying to get my business with a special introductory offer on my house phone, TV and internet for just under €10/month for the next year. Actually I was somewhat interested as I've been disappointed with my internet provider lately, although to be honest this area is known for not having particularly good internet capacity. Anyway, I listened to the lady but as I was in a bit of a funk I just thought "I can't be bothered going through all this again" so decided to call my own internet provider, SFR, and tell them what Free had to offer and could they match it? And seemingly they could because I had already looked on their website. Well the lady tries to tell me that the offer is just for new customers so I said that in that case I would just give Free the go ahead to take over my account. And that's when I got put through to Mr. Account Retainer Guy! Now sometimes I have a hard time understanding these people because they go through their spiel so fast and very often they seem to have north African accents (the equivalent of the call centre in India?), so after a while I told the guy I wasn't interested in listening to much more or being put on hold again so could they do something for me or not? At this point he tried to offer me a special deal on a movie channel but I told him I wasn't interested as I don't watch French TV, so long story short, he knocked €20/month off my internet/house phone deal and another €7/month off my mobile if I would stay with them. I don't actually spend a great deal of €€€€ on either anyway so I was happy to go with that. I guess it really does pay to ask then, as long as you are prepared to politely tell them to quit the BS and let's just get down to the nitty gritty right? Actually, that's the way I ended up handing my notice in. As my friend said, you can go in there and ask for what you want (in my case, occasional telecommuting) but you have to be prepared to put your money where your mouth is and follow through if you don't get what you want. And since that's something I've always been prepared to do, I handed my notice in within a couple of hours of being refused! (And the dumb thing is, everyone at work has been working from home for the past 10 weeks now but hey, what do I care now)!
I also finally managed to get Jordan's US taxes sent off and his British passport application. Wouldn't you know his passport runs out in July and as from 1 July we have to be requesting our residency permits for France, although I honestly believe the website will crash for the first couple of weeks anyway, so he should be ok. I had to laugh though as I uploaded his picture onto the passport renewal website and his picture came back as "unacceptable" because (apparently) it was difficult for the computer to distinguish between his facial features and the plain wall behind him!!! Who wudda thought - my son has a face that looks like a brick wall!!!!! I sent it off anyway as I disagreed so we'll see if it comes back. They also now ask if you have a second nationality and since he also has US citizenship I was supposed to send off a photocopy of every page of his US passport - which I don't have - so I just sent in a copy of the main page. I'm keeping my fingers crossed it'll go through as is but who knows!
And talking of Jordan, it was his 28th birthday yesterday so I drove to their place to take his gifts over and chat for a while. I really do like their apartment because although it's small they have the most fabulous balcony overlooking a park and the mountains so I think that apartment was a good choice. And would you believe he's off on sick leave until this coming Friday because he managed to drive a nail through his thumb and ended up at the emergency room on Thursday. Apparently it was spewing blood so badly that his boss almost passed out (😅) so there were almost two of them out sick that day! He said it hurt like hell at the time but the doctor did a really good job of stitching it back up and Jen has been able to change the dressing on it and keep it clean, so hopefully he'll be back at work next week! 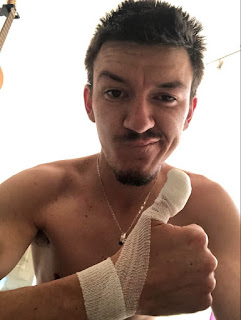 I think my satellite dish is also on the blink so I'll have to get "the guy" to come out and try to realign it with the UK channels again for me. In the meantime, I'm still watching The Sopranos and have taken to watching Gina, The Italian Grandma cooking on YouTube. She's great and I like the way she cooks but she speaks English like my former neighbour in England who came to England as a war bride and never actually bothered to learn English properly. Everything - male, female, inanimate object - was a "she" and sometimes her rants were a delight to listen to (for the neighbours at least, maybe not for her 10 kids)! But Gina is fun to watch - as long as you've watched a few Sopranos episodes and can guess at half the Italian words!
Which brings to mind Trump's latest spat with Twitter. I think he has tried to open social media up to lawsuits, or something like that, you know, for doing depraved things like fact-checking his tweets. It was originally touted as being that Trump wanted to close Twitter down, but could you imagine Trump without Twitter??? It would be like putting two Italians in a room, tying their hands behind their backs and asking them to hold a political debate!
Then on Saturday night I got an email from a former colleague who must have retired almost 20 years ago (I remember processing her pension and medical insurance paperwork). I bumped into her in town about a year ago and she did the usual "oh we must get together for a drink" kinda thing, "here's my email". So I sent her an email just to say hi and never heard back from her. Until Saturday night, when she sent me an email and asked if I could call her to "discuss pensions"! My first thought was that it was a scam so I checked on the number and it was indeed her number. So then I thought maybe she had gotten confused and thought I was still working in HR, but in the end I called her and she had a whole list of questions about whether she was entitled to keep French social security and our work medical insurance, did she have to pay the CSG (tax) on this and that? So I asked her if she realized I had retired and was no longer working in HR and she said "oh yes, but Chantal gave me your number and told me you knew all about it"! Bloody Chantal is the woman my friend and I bumped into on our way to Italy last year when she was telling me that she would love to retire but couldn't afford to, although "it's all right for you because you were a higher grade", and then went on to tell us how she went to Italy every week during the warm weather to go clothes shopping. And she was the one that had the same question about the CSG tax where I had been given conflicting information by two different tax guys and she went ahead and forwarded all MY tax information (with my name attached) to our local tax office to have them answer her query! I was furious because although I had nothing to hide and have indeed declared everything, that bloody female had no right to forward my information to the tax people!!! She's one of those people who talks at you not to you, and since she also sent me an email to say that she would be retiring in June I'm thinking I'll have to avoid our local town like the plague from now on. Anyway, I told Josy I couldn't give her any advice on her situation because I am not a tax expert and have never actually worked in France, so all I could do was give her the name of my tax guy (the good one, not the "charlatan")! But staying zen knowing that bloody Chantal is handing out my personal tax information and my contact details to staff members and former colleagues is not going to be easy I can tell you!
So on that note, I'll finish with a picture of my lovely peonies and roses. All very beautiful of course but keeping up with dead-heading them takes quite some doing. Maybe it'll be easier to rip the dead heads off if I picture Chantal's face on them! Chantal's face on roses? Nah, maybe not. She's more like poison ivy. A pain in the butt you can't get rid of!
. 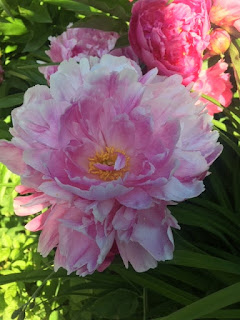 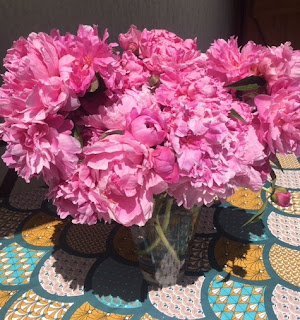 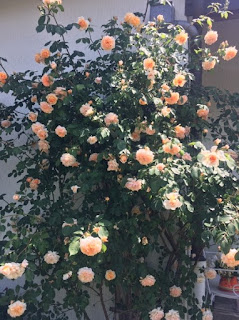