I had so many plans for today - I was going to go on another walk (once my muscles "defrosted"), then come home and spend some time clearing more stuff out the basement (why do I sense I'm going to get my son's stuff dumped on me soon?) and then do some batch cooking to get ahead for the next couple of days. In the end what did I do? Bugger all! By the time I'd got my backside into gear it was already starting to warm up and I just couldn't face doing much more than sitting in the back garden reading. There's no law against it but I do get annoyed at myself sometimes! As I say, the temperatures are starting to pick up now and we've already hit 32°C (90°F) this week so I'm not looking forward to the start of the hot season which will soon be on us. I did get Jordan to carry my mobile AC unit up to my bedroom the other week so I'll probably be starting to use that soon, although I like to hold off as long as I can. And then of course I could always do a few "lengths" of my paddling pool (ha!) trying desperately to look like a naiad but in truth looking like Moby Dick proving Archimedes' water displacement theory. Not to worry though, that's one of the advantages of living alone isn't it!
I have the AGM of our local community association tomorrow night where I will be attending in my capacity as President of the Sewing Club (I know, the responsibilities!!!!). I've already sent in our accounts and a list of members but if I'm correct tomorrow will be when they hand out the different subsidies to each club so I need to be there for that. They're very generous actually because the commune of Amancy give us the room for free (and I don't even live in that commune) and also give us a small amount of money to spend for the benefit of the club. Last year I bought two second-hand sewing machines but we've still got plenty left in the bank. We each pay our teacher, Patricia, an annual amount of €100 for her services so I'm thinking I might use the money from the commune to subsidize that amount this year in view of having to shut up shop during lockdown. Either way, we're on to a very good thing. I got an email the other day from the association that organizes the Italian lessons too in which they sent out a form saying that they would reimburse anyone who requested it on a pro rata basis, but also giving people the option to forego reimbursement in order to help the association. Since the MJC is a community-led association I decided to just give up the money, although in reality our teacher had already been off sick a month before covid shut the lessons down entirely. Still, if it means that they were able to keep staff on their payroll it's a small price to pay and I don't actually need the money!
I probably won't get to go out walking tomorrow since I plan to go grocery shopping instead to get that out of the way. I looked on the web and saw that on Wednesdays they have an open-air market in a lovely little town called Excenevex, which is right on Lake Geneva, so I might try to shoot out there tomorrow and have a wander. It will probably take me about 40 minutes to get there, but it is a lovely spot with a nice little beach right on the lake so will make nice ride out - if I can get myself moving!
As I was pottering in my garden my neighbour wandered over and I was asking her how she enjoyed Father's Day and seeing her grandchildren that live in Switzerland. She said they'd had a lovely day together and was over the moon to see her grandsons, although she still worried about the older grandson as he has Downs Syndrome and is more fragile health-wise. She also said that they are saying in the French news to expect a new covid spike in September and that people should prepare accordingly. I figured it would happen anyway as the country, of necessity, has to open back up, but here's hoping it's not as bad as this first round!
Anyway while we were chatting I starting digging around in my potato patch. Remember, the potatoes that I planted on top of the sheet of cardboard? No digging, no lugging soil around, just plonk down the cardboard, throw on some sprouted potatoes from the garage and dump grass clippings on top. Well guess what, it looks like it has worked! Talk about the lazy woman's guide to potato growing. I only poked around at the one plant as I didn't want to disturb it too much but I picked six decent sized potatoes and just covered the diddy ones back up. Honestly, I had no idea what I was doing, how often I should mound up the clippings or anything, but they are definitely growing! Yay me! They've worked out better than the cucumber plants (they were savaged by slugs). The curly kale has done well. The tomato plants are coming along fine and also the courgette (zucchini) so I'm quite pleased considering the amount of studied neglect I have subjected my garden to for the most part! 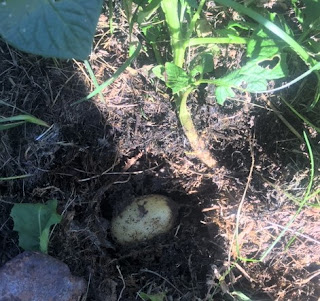 In reference to my son's situation somebody commented yesterday that I did well not to wrap my kids up in cotton wool. I was thinking about that and realized that I probably would have done if I could have, but either way I guess I was more relaxed than some. I've always been pretty easy-going and thankfully my kids seem to have taken after me and are not highly-strung like their dad. While I was talking to André up in the mountains yesterday I commented something about Lily not having had the easiest of childhoods - but then neither did he, what with the screaming, shouting and physical violence (directed at me, not them). And he said something that really touched my heart. He said that he actually had a great childhood and sure we had our issues but then what family doesn't - and I wanted to cry as I've long felt so guilty for "failing them" when they were little. I guess it's just as well my phone battery conked out when it did!
But it got me to thinking about "coddling" your kids and brought to mind a woman I worked with when I was just 16. From age 16 onwards I had a Saturday/holiday job working at WH Smith (the big bookshop/record store/stationers). Initially I worked on the shop floor/cash registers and hated it. I remember when the kids were buying their back-to-school supplies we had to ring up all the different pencils according to their individual codes and it was really tedious. I also remember the actor, Robert Morely, coming in one time and walking straight to the front of the queue, so I asked him to go to the back of the queue as people had been waiting. He looked at me and said "do you know who I am?" and I said that no I didn't but these people had been waiting and I felt it was right that they got served first! (Mouthy little sod wasn't I). Well my heart was thumping but I thought I'll be buggered if I'll let that sod jump the queue. As he was paying, another customer leaned over and congratulated me for speaking up - and I went bright red in the face as a result. I never liked Robert Morely anyway. As far as I was concerned he was another Hugh Grant - an actor with just one act, although at least Hugh Grant was better looking!
Anyway, someone in the queue must have spotted my name badge on my lapel and a bit later in the afternoon the switchboard paged me to answer the phone. My heart was pounding because my dad had had several heart attacks already and I just assumed it was bad news. But no, I picked up the phone and some twisted bastard called me by name and told me exactly what he would like to do to me!!! He also told me that he would be waiting for me outside the shop when we closed!!! I just burst into tears, walked off the shop floor and explained to the manager what had happened. I was only 16 and terrified that this jerk would indeed wait for me when we closed so the manager walked me to a back door and off the premises that evening! Perverted bastard!
All that was by the way, of course, because I always seem to go off on a tangent don't I. Eventually after a few years at WH Smith I graduated to working in the cash office, tallying up the cash registers (which were rarely accurate) and working with the ladies who suspected some light-fingered work going on, in particular in the record shop. Anyway, two sisters worked in the cash office - Kath and Mary. Both were very nice and Kath had a son my age - Howard - and I couldn't believe some of the stories she told me about "Howie"! Howie had various Saturday jobs but mommy always told him "don't you let them put upon you Howie, you just walk out if they do", so Howie was always walking out of jobs where, apparently, they didn't appreciate mommy's little treasure! Mary, the older sister, used to look at me and roll her eyes. Daddy used to drive in to whichever job Howie had walked out of that week and pick him up to drive him home. Now this is in city centre Birmingham, the UK's second city after London, with excellent public transport, but nope, daddy always had to drive in and pick precious up! Even I was stunned. When I handed in my notice because I had got my job in Geneva Mary pulled me aside and said she couldn't believe I was starting work in Switzerland and Howie had just walked off his umpteenth job because yet again they didn't appreciate him! So yesterday's comment made me think - I wonder whatever became of Howie? Not much I expect!
Posted by Treaders at 22:02