… go out in the mid-day sun! But at least this time I remembered to put more sunscreen on. I went over to my youngest son's place today as my oldest moved in with him and his wife last night. I hadn't wanted to write about it before, and to be honest I'm not going to go into too much detail here, but my oldest was blind-sided by his wife about five weeks ago when she said she was thinking about asking for a divorce! They've been together almost 15 years and married for three, and as far as he knew were very happy together, so to say it hit him like a 2 x 4 round the head is probably an understatement. She has her "issues" or "complaints" which she spelt out to him in a letter, but to be honest they seem to me to be "issues" that can be dealt with by talking - not by separating!!! I just listened as he told me everything that she said and tried to be as supportive as possible. His wife then left for the week to move in with her friend and at the end of that week my son moved into an airbnb and has been there for the last five weeks. He has many places he could have stayed here in France of course but the bloody borders have been closed and when he went to ask at the border they told him he wouldn't be allowed to cross into France (he lives in Switzerland) because his life was not in danger! So he's been in what turned out to be a very nice airbnb until yesterday. His friend offered him a place to stay, as did Jordan and Jen (and of course he can stay here as long as he wants), so he took Jordan and Jen up on their offer and moved in last night since the borders opened up on Monday.
I went over there today to see him (first time since Christmas) and I have to admit he looked better than I thought he would (although a shower and a shave wouldn't have hurt at that point). They stayed up 'til 3 a.m. chatting so he had a bit of a hangover too, but I reckon he got a lot out of his system just by being there and talking with them. The good thing, as far as I'm concerned, is that he's now getting angry and ready to stand up for himself. Lily wants a trial three-month separation before they make a decision, during which "we can consider ourselves to be exes". He's now made up his mind that the wedding photographer (Pete) is a definite no-no from now on as Lily made the mistake of admitting she had feelings for him (although he's in the UK and I don't think anything has happened between them). He also told her that as long as they are still married there is no question of "considering themselves exes" so if she wants the freedom to mess around they'd better go for the divorce up front! They spoke last night and she still wants to go with the separation until September, but now he's more of the mind that even if she decides she wants to continue with the marriage he's not sure he can trust her again and is not willing to go through this a second time! So there you have it - the drama that smacked my family upside the head so unexpectedly!
He seems good though and although initially he was saying he doesn't want to move back into France, when I mentioned to him how lovely Jordan's balcony was he said "yeah, I'd forgotten just how beautiful it is round here". So if they do end up splitting, moving back to France might be more appealing to him now than it was, all the more so since he could afford to buy something in France rather than rent. Then of course we've got bloody Brexit to contend with but as long as he moves before 31 December he's guaranteed the right to stay (and to be honest, it shouldn't be a problem anyway). I told him wherever he stays, to put my address as his home for the time being as they already know him at the Mairie here since he lived the first 21 years of his life in this village, and I can give him an attestation to say that he's living with me for free. Anyway, we're not there yet but there's an awful lot for him to think about, both on an emotional and a practical level!
On Thursday I went into Geneva to have dinner with my friend, my first time crossing the border and my first time in a restaurant since God knows when. The weather has been crap for about 10 days now and around 3 p.m. we had the most almighty hail storm I thought the windows might crack. So knowing that the road conditions would probably be horrendous I set off nearly three hours early to get to Geneva and decided to just spend the time waiting sitting on the lake front reading … and it was just lovely! The rain had stopped by that time and there were a couple of families just sitting on the lake front with the kids splashing around - and I thoroughly enjoyed every minute of it! One thing I did notice though is that Versoix (where the restaurant was) is a pretty nice little town in Geneva's suburbs, except for the fact that it is right under the flight path for the airport and is therefore really noisy. Except for Thursday that is, because with air traffic hardly showing an uptick as yet, in the 90 minutes I sat there reading I only counted four planes going over. What a respite that must be to the locals! 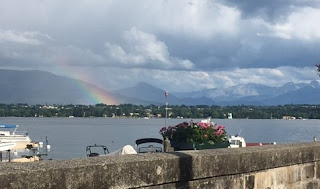 I had a lovely evening with my friend, who caught me up on all that was going on at work and while he has a big meeting coming up in July and is very stressed (oh I remember those meetings), I invited him to come over to my place once things calm down so we can spend more time together and he said he would like that.
In other news, I was watching another episode of The Sopranos the other night and it centred around a "war" being waged between the Italian mafia (The Sopranos) and native Americans who wanted the statue of Christopher Columbus removed because of what it represented. So 20 years later things haven't changed that much have they - or maybe The Sopranos writers were more attuned to human behaviour than we care to think.
I've also been attempting to cook more vegetarian meals lately as I'm still leaning more and more towards heading that way. Well vegan is also a possibility actually since I've found for a long time that dairy irritates me and I end up coughing and trying to clear my throat if I have too much of it. Vegan might be a bridge too far at the moment though but I don't think I would have much difficulty going vegetarian. I'm finding more and more that meat just doesn't do it for me and I love vegetarian food anyway. What's more I started watching the vegan-produced documentary Dominion the other night and I could only stomach the first 20 minutes of it (so far). I've watched these kinds of programmes before and managed to get through them but this is the first one that has turned my stomach to this extent. Narrated by Rooney Mara and Joaquin Phoenix (amongst others) it is very well done, and I have to say pretty upsetting. So with that in mind I made what turned out to be a rather good chili tofu noodle dish the other night, and vegetarian or not, I'll definitely make that again!
I guess it's no surprise to anyone except Trump that the Tulsa rally turned out to be not quite the roaring success that he bragged it up to be. I for one am at least glad that many people seem to have done the sensible thing and stayed away, so maybe the message that "there's a pandemic going on" did get through to some! I'm just curious to see how Trump will exact his "revenge" on whoever for the latest narcissistic injury, since narcs can never let any perceived slight go unpunished!
And finally, I read in the news that Bojo is having a plane repainted to look more "official" at a cost of £900,000 and many people are outraged as that money could be much better spent. So the following meme tickled me -  made me laugh out loud actually - although I'm thinking maybe only the Brits and the Aussies might get it! 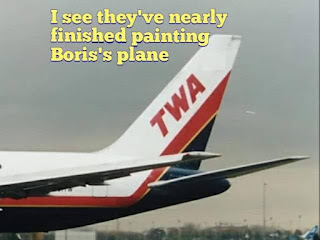