I must be mad!

So old "Blowjob" got his landslide victory in the UK elections! God help us all! I'm not really surprised, more disappointed of course, but I will be curious to see him lie and bluster his way out of everything now he has to actually deliver on all the hot air he's been spewing! Some people see the massive victory for the Conservatives as a second vote for Brexit, but I don't see it that way to be honest. I think everyone is just sick to death of living and breathing Brexit that they want it done one way or the other! I know I am - and I want to stay in the EU! But I just think que sera at this point! It's funny really because my nephew is a staunch Labour supporter, has worked in the Labour Party archives in Manchester for years and is very politically minded. Always has been, and is very knowledgeable (and pretty interesting to talk to, just like his dad, my brother). But he was telling me before the election that this time, for the first time ever, he was going to destroy his vote because as much as he hates the Conservatives there was no way he was going to vote for Corbyn. Condamnation indeed! And the biggest "laugh" (so far - I suspect more Trumpesque behaviour will be forthcoming from ol' Bojo) was that in his victory speech he declared he was "humbled" by his victory! Ha, ha, that's a good one. Bojo may be many things but humble will never be one of them. But, on a practical level, I suspect he was the only candidate with the kind of personality (full of BS and bluster) capable of holding his own with the likes of Trump and Macron. I guess only time will tell but either way, hopefully, I'll soon be French and can stop thinking about what a bloody cock-up it all is!

In other news, I watched a documentary the other night on the Sally Challen murder case and I have to say it was a rather strange experience. In 2010, after many, many years of bullying and routine humiliation, Sally Challen beat her husband to death with a hammer and was sentenced to 18 years for murder. In 2015 "coercive control" became a crime in the UK and her legal team used that new law to ask for her to be allowed to appeal and her case reviewed with a view to having her conviction reduced from murder to one of manslaughter on the grounds of her husband's coercive control. By all accounts, for pretty much the entire duration of their marriage, her husband was a cheat, a bully, abusive, occasionally violent and had raped her on several occasions. While both her sons stood by her only one felt able to be interviewed on camera and it was he who campaigned vigorously for her release, aided by Justice for Women. Earlier this year the charge against her was indeed reduced to manslaughter and she was subsequently released after spending over 10 years in prison. This documentary told her story from the start of their relationship to her subsequent release from prison. Rightly or wrongly I have a lot of sympathy for women (and men) in this situation, having been married to a violent man, and I know how easily a person can be pushed over the edge with the constant drip, drip, drip of abuse and walking on eggshells, but sadly, for me, I found Sally to be a rather unsympathetic person. She seemed almost zombie-like (maybe she was on medication, I don't know), but while I still think it was the right decision to release her, I found it harder to warm to her, and yet felt so much sympathy for her son who had fought so hard on her behalf. Strange!

In slightly less depressing news, I finally got my Christmas tree put up this week, after getting most of my downstairs back to normal. I hate putting the tree up but I'm always glad when it's done as it brings so much "sparkle" to the house. 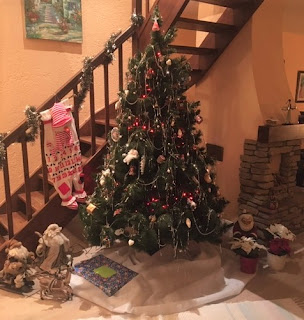 Then yesterday I was invited to a friend's house for an early Christmas lunch between former colleagues. J is a wonderful cook and she and her husband are fabulous hosts and I really had a lovely time. Of course since we had all worked together for years we had so much to talk about and had a really good laugh. She even got hold of Christmas crackers with paper hats and silly jokes in them - the cornier the better. "What do you call a hen that can count her own eggs?" "A mathemachicken"! I tell you, after a few drinks that joke was hilarious! 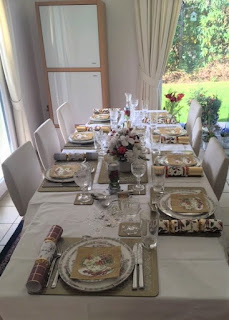 The gods were also kind to me and I managed to make it all the way back from her place in record time, despite it being rush hour and their house being about 60 km away on the other side of the lake!

Tomorrow my friend and I are off on our final trip of the year to the Christmas market in Colmar. It is one of the biggest and best known markets in France and is supposed to be beautiful. It's not an area I know too well, although I have spent time in nearby Strasburg, so I'm looking forward to it, all the more so since we are staying over night. So despite another early morning start we don't have to trek all the way there and back in one day! Photos to follow I suspect!

And finally, I do my Monday morning and Tuesday afternoon yoga class with a lady called Sylvie, who I like very much. On Tuesday afternoon the "Présidente" of the yoga club said that they and the hiking group were organizing a snow-shoeing outing up in the mountains behind my house in the new year and that anyone interested in going was to let her know by early January so that they could book the restaurant up on the plâteau. So Sylvie came over and asked me to go!!! I've never been snow-shoeing in my life, I tried cross country skiing once and hated it, I'm totally unfit, and despite all of these ladies being older than me guess who will most likely end up being "tail-end Charlie"! But Sylvie virtually begged me to go with her "as it would be such fun" (yeah, right). But stupid old me is actually thinking about it! I know I need to get some kind of aerobic exercise going and signing up for this would give me 6-8 weeks to do something about my abysmal fitness level but …. Damn, I must be mad for even considering it!