Back in the land of the living!

If a year of retirement has taught me anything I guess it's that I really need to learn to pace myself a bit better! This past week I've been so tired but it's not surprising I guess really is it, what with the work I got done on the house, four different outings over four week-ends and of course the run up to Christmas! When it all gets too much for me I just basically do bugger all, don't even turn on the computer (hence I haven't been commenting on your blogs) and veg for a few days to get some "oomph" back. So yep I probably need to learn to pace myself a bit better. A year's retirement has confirmed to me that I absolutely love it, although if I'm honest I do miss the company of my work colleagues occasionally. It's quite something else to live totally on your own and then not have your colleagues to chat to, but for the most part I'm ok with it. That being said, this near constant rain we've had for the past month would get anyone down, and that's saying something for a Brit! I haven't found the TV to be a problem in retirement - I'm definitely not sitting glued to it - but I do have it on as a bit of background "noise" sometimes in the evening. I guess the real problem is the computer. Man, I can stay on this thing all day sometimes so that's definitely something I want to knock on the head in the new year! I have gotten back into reading and also cook every couple of days so I'm glad about that, but I have to admit I do miss having someone to cook for on occasion! Never happy am I?

I mentioned previously that we had an overnight trip up to the Christmas market in Colmar (Alsace) last weekend and again it was very good, although the trip up there was horrendous! The wind and rain just roared all the way up but the odd thing is as soon as we got off the bus the rain stopped and the sun came out! Every single time, it was weird! It also wasn't particularly cold given that it's December so it really did work out well for us. We had a late brunch on the way up there (I guess the driver has to stop every so many hours), about four hours to wander round Colmar, and then on to dinner at our hotel - choucroûte garnie (sauerkraut with all the trimmings). I'm not a great fan of sauerkraut but once a year I can enjoy it, especially with that wonderful Alsace white wine!!! But it was a long day so I think we were all glad to hit the sack that night! 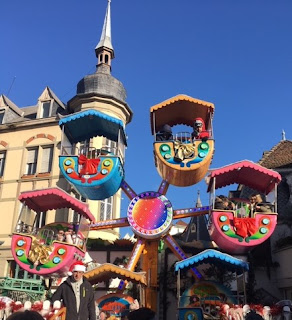 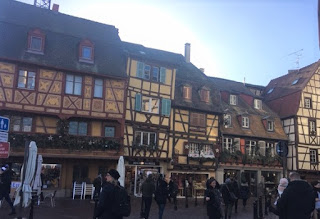 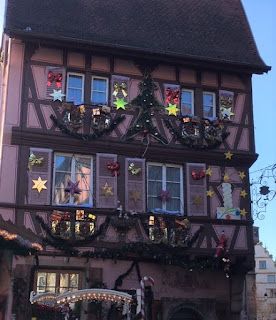 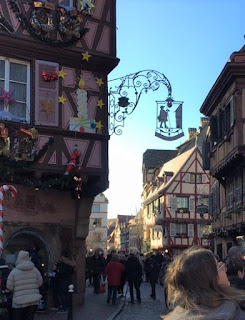 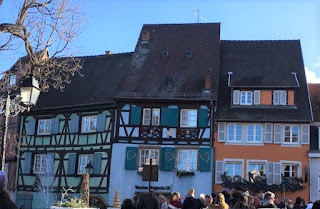 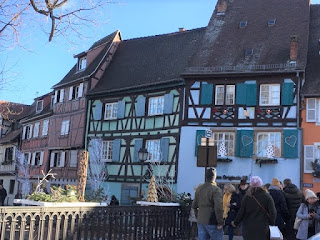 I love this architecture (Tudor?) as it reminds me of the little country villages back home and oh was everywhere just so pretty (the mulled wine went down pretty well too as we were walking around)! 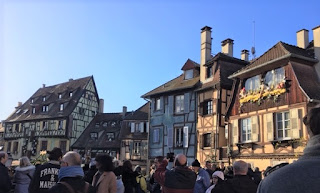 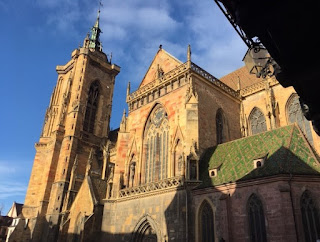 The next day we were up in time for breakfast before heading out to the village of Ribeauvillé, which was probably the prettiest on our trip, but not as big as Colmar! I almost made a complete pillock of myself at breakfast though as I picked up a hard boiled egg and some bread but just as I got back to my table I realized they had had boiling water right next to the eggs for you to "boil your own". I'm just glad I didn't crack raw egg all over my neighbour!! 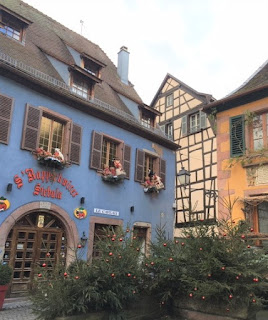 As I say, I think Ribeauvillé was probably the most beautiful of the villages but Riquewihr had the best crafts, so we put a few dents in the bank card yet again, but I really don't mind when it is such pretty stuff!

After Riquewihr the driver decided to give Kaysersberg a miss in favour of our planned trip to a winery! This was interesting, all the more so when they came round with five different wines for us to sample!!!! It was funny though because on our trip to Cinque Terre earlier in the year we met an older lady and her daughter, and they were on this trip also. Now the daughter had what appeared to be quite severe Down's Syndrome and was, I would think, quite a bit older than she actually looked. Hard work for mom but I can only applaud her there. I tried chatting to the daughter a few times and asked her what she had bought but there really wasn't much conversation to be had. Well, at the winery the daughter picked up her glass and went "head-to-head" with every sample before the mother realized! To be honest it was only a smidgeon at the bottom of each glass but she was knocking them back like they were going out of fashion. Mom jumped up and took the glass off her but even she had to laugh at the big smile on her daughter's face after that little escapade! 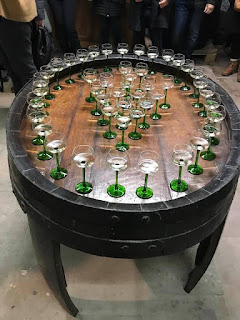 After that we headed back home - our last trip of the year. Next year I think we are looking at Amsterdam and the tulip fields in May but nothing much else right now, apart from our "ubiquitous" annual trip to Turin market, probably around May or June time.

I'm not sure if I'll get time to post between now and Christmas, so if not I hope you all have a lovely time with your loved ones and I'll look forward to catching up with all the gossip in the new year! Merry Christmas!