Saturday night we had our latest board game evening at Jordan and Jen's house and as always it was a very nice get together! As usual we took way too much food but … what can I say … it was all very good! I made "confetti rollups", brownies and bara brith. Bara brith is Welsh for "mottled bread" and since I knew Jen likes that kind of spicy flavour I decided to make it for her, even though I'm not overly fond of it myself. My mom used to serve it with butter but I took cream cheese (any excuse for extra calories I guess), and as there was some left over Jen took it to work - and now the nurses at her work have asked for the recipe! It seems kinda funny to me to think that nurses in a French psychiatric hospital will now shortly be making Welsh bara brith! We also did a secret santa and I received an "escape room" game that we may be able to use at our next evening. I'll have to check out how to play it but it does look fun. We decided that we might try to have our evenings "themed" in future, and since the next one is on 8 February I'm thinking carnaval might be a good theme, so I'll start looking out for an outfit, just in case. 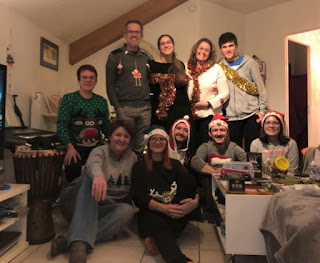 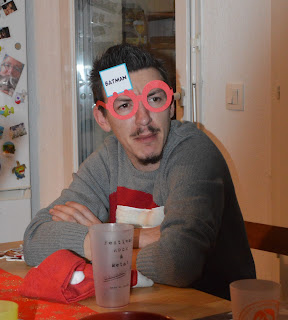 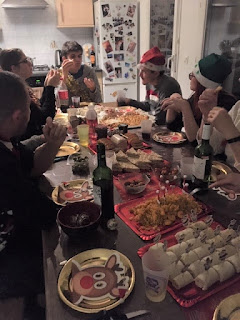 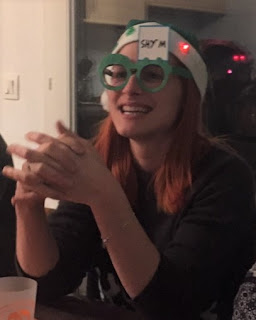 I didn't get home until 1.30 a.m. and I was pretty tired next day, so it's just as well our next day trip didn't set off until 1 p.m. on the day after! They are happening thick and fast at the moment but there's not much we can do about that as so many of the trips we selected are "Christmas-related". This trip on the Sunday was back to Lyon for the Festival of Lights. We got there about 4 p.m. and had a few hours to just have a wander before setting off on a short boat trip along the river Saône. 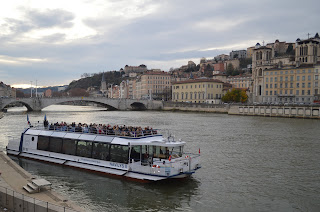 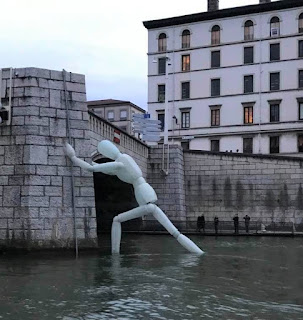 On the boat we were all given a map of Lyon with around 30 different "points of interest" highlighted, so my friend and I shot off to "point 1" way up the hill in the old town, and what a bloody trek that was, although luckily it wasn't particularly cold and the rain held off. Or held off, that is, until we got to the top of the old town and then it started, just in time to make our run back down to the river(s) over the cobbled stones quite a hair-raising gallop! But we had to keep going as we realized we were running late to meet up with the group for dinner - you haven't seen anything until you've seen two tubby middle-aged women trying to speed down cobbled stone walkways to make it in time for dinner! Again, the food was very simple but very good. As we were eating I kept glancing at the older man next to me thinking "I know him from somewhere" but couldn't place him. Eventually a blond lady said "hallo Anna, how are you, and are you still doing patchwork"? and I realized that she was in the patchwork club I used to go to on a Monday night when I was still working, but had stopped when they decided they no longer wanted to open up the clubhouse in the evenings. The white-haired gent, as it turned out, was the husband of the lady President of the club, Colette, only she hadn't been able to come on the trip as they had a quilting exhibition going on at the same time! Then, the husband of the blond lady was saying how he wished he could speak English as he spent so much time at Company XX in Geneva ... and my friend and I both burst out laughing as that is where we used to work! We had a colleague who had a terrible accident about five years ago and is now quadriplegic, but was determined to come back to work and now comes in one day a week. He obviously needs support and the gent at our table was his regular assistant on his work days and also, I believe, in his personal life for his basic physical needs! It's a small world isn't it!


Once it fell dark the different light displays were indeed amazing, but I have to admit it was all a bit much with the heaving crowds. In the city centre the police had it well organized, keeping people pretty much obliged to follow one-way foot traffic in order to avoid a crush situation, but it does get very wearing in the end, so after a couple of hours we just went to a bar for a drink and to wait it out! There were loads of young people on the side streets selling mulled wine or hot chocolate and it was all very good natured. Lyon really is a vibrant city and yet again it was a pleasure to visit, crowds or no crowds! (A couple of the photos below are google images because I obviously couldn't get high up enough to shoot some of them!) 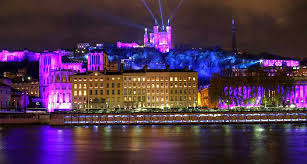 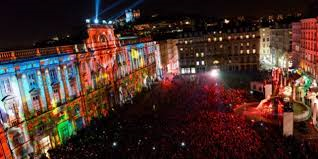 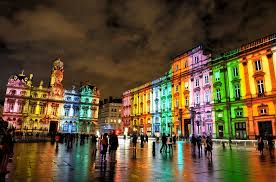 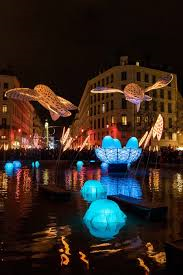 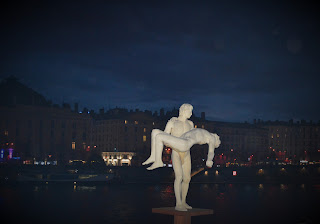 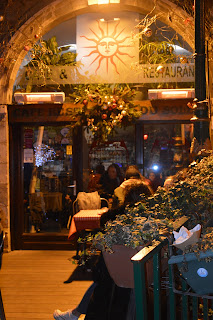 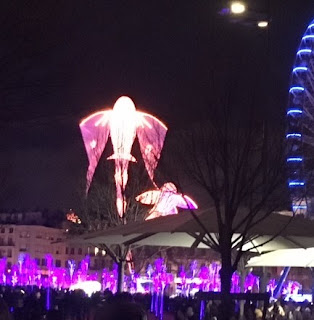 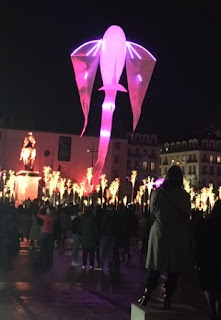 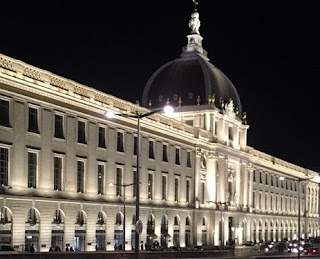 When I checked my phone on the way back I had clocked up over 14,000 steps in just one afternoon/evening so it's no wonder I felt tired, all the more so since we again got home at 1.30 a.m.! Think I'm too old for this stuff, especially as I had early morning yoga the next day! But I made it!

On a totally different subject I see the latest series of "I'm a celebrity get me out of here" has just finished! I actually had a shot at watching 10 minutes of it the other week but I felt like I needed to wash my eyes out with bleach even after just such a short time! Dear god alive, what won't some people do for money!!!! I've never seen such crap in my life - well all of the reality shows to be honest - urrghh, I'm so glad that's over until the next time and I don't have to hear or read about it in the media for a while, even though I obviously voted with my TV remote and didn't watch it for more than those 10 minutes! What crap TV!

And finally, my neighbour came round the other day all of a "tither" as they had received a notification from ENEDIS (probably the largest electricity company in France) informing them that their (external) electric meters will shortly be replaced with "Linky" meters, and they are all up in arms! Supposedly the Linky meters are "not good for people who are hyper sensitive to electrical waves" (or something like that). Seems it's been on the TV for a while but since I don't have French TV I'd never heard about it. But if my meter belongs to ENEDIS and I have no legal say in the matter, I say just get on with it, do what you have to. I mean, the bloody thing is outside anyway! I believe, although I'm not certain, that the new meters can be checked remotely and so will no longer require a meter reader to go house to house! My neighbour was all up in arms because "do you want ENEDIS to know all about your electricity consumption"? Say what? As long as ENEDIS don't think my electricity consumption is indicative of the fact that I might have a cannabis farm in my basement I really couldn't care less what they know about me! So I said, "you've got a mobile phone haven't you?" To which she replied of course, so "why are you worried about an external electricity meter when you hold that thing to your ear half the day"? And she couldn't answer me. I happen to think the world of this neighbour but oh the French do seem to like to get their knickers in a bunch sometimes!
Posted by Treaders at 21:27