Yesterday, as arranged, I met up with Ginette, the lady I got chatting to at the market a few weeks ago, and we decided to go have lunch in town. She's obviously very thorough because she'd phoned five different restaurants to find out what their set menu was - I always just rock up and go from there - but we ended up at a very nice restaurant built into the walls of the old medieval town of La Roche. I had been there many years ago with my ex and while the food was good it was a bit "fancy" for me. I like something less fussy than "battered courgette flowers", so somehow I ended up never going back. Apparently it has changed hands several times since and I have to admit the latest owner seems to have gotten it just right! Very good food, not enormous portions (that grosses me out) and very reasonably priced! He had a young trainee working with him who, we found out later, was only 14, and at one point we could hear the owner giving him hell in the back kitchen! "Do you call that clean, you've got to move faster, there's loads to be done"! I think we all felt kinda bad for the young lad actually and as we left we asked him to go easy on him as "we were all young once". But the guy said, quite rightly I guess, that "our" generation grew up having to work for a living - real work - and he just couldn't get his head around how so many young people today were allowed to just skate along and do bugger all, and then "call mommy" if things didn't work out for them! He's absolutely right, but I have to admit that while I had to work for everything I wanted because we were a large family with not much money, I/we allowed our kids to "just skate" quite a bit and I'm not sure that was doing them any favours! That being said, my kids are both hard working and respectful so I guess we did something right. It's odd because Jordan went into plumbing later than most kids because he had done a commercial course beforehand, and I remember him telling me that some of the younger lads in his class needed a good kick up the backside - they were lazy, occasionally disrespectful and were always on the verge of "calling mommy" if they didn't like the way they were spoken to! This wasn't the majority of them of course, as I remember at the awards ceremony how respectful the kids were to their teachers, but some of them even got on Jordan's nerves for being "precious little snowflakes"! Studying plumbing? Seriously? 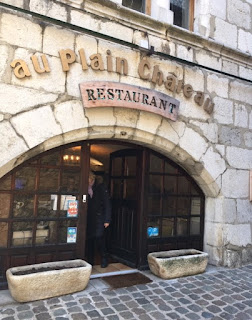 After lunch Ginette suggested we go for a walk around the park at the back of the château as it was such a lovely day - my favourite kind of weather actually - crispy cold but with bright sunshine - and would you believe in the 30 years I've lived here I've never been to that park. It was lovely! So we had a wander and she showed me a path through the woods that would bring me out nearer my home, although I'm not totally sure I would go walking in the woods on my own, to be honest! But we sat in the sun and had a good old chinwag, and she turned out to be a very nice lady! 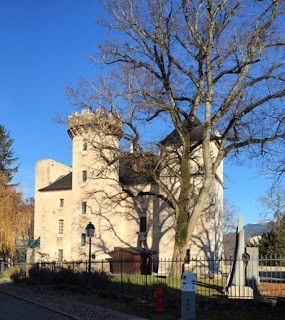 She was married briefly many years ago (he cheated on her so she divorced him), and has had a couple of partners since, the latest lasting three years, but she was explaining to me that she wants to get out of the relationship. They don't live together but she said he is lazy, demeaning, mean with his money and lies constantly. Sounds like a real catch huh! They met at the dance club they both go to and she said while it's great to have a dance partner she is fed up of him and worried about how to get out of the relationship. Like me she's not interested in ever living with someone again and sadly, it seems, so many men of her age (she's 72) end up looking for a nurse, and possibly a purse, in their later years while, in my experience, the women value their independence. And I agree with her absolutely in not wanting to take that on! You put the effort in for your spouse and your kids because you take the bad times with the good, but to take on that kind of "hassle" in later years for someone you're not even that fond of sounds like more of a "lead swimsuit" situation to me! It's amazing though how some people just open up I find. Maybe she just needed somebody to talk to, I don't know, but she pretty much ended up telling me her life's story. I don't mind in the slightest but some people might find it weird I guess!

After our walk she suggested we go check out the local library, and again, I've never been to it in the 30 years I've lived here! That's not surprising though really as I'm used to a huge library in Birmingham, where I'm from, so these little local libraries don't really do it for me. Plus everything is in French and while I read in French, by choice I will always read in English. On top of that I must have at least 150 books sitting looking at me waiting to be read right now - no kidding - so I really don't have much use for this library. But, what a stunning place it is! 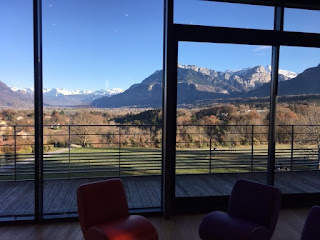 Anyway, we said we'd meet up again when we're both free and the weather cooperates as she seems to know some good walking routes round here, so I shall look forward to that!

In other news, on Thursday they called a national strike in France to protest against the pension reforms Macron is trying to introduce. I know, I know, they're always on bloody strike - that's why I never use Air France and never fly through Paris if I can help it! It's that bad! I don't really understand the ins and outs of it all as I don't have French television (I will never be that masochistic), but my neighbour was explaining a bit about it to me on the way to yoga the other day and I understand the situation a little better now at least. She was saying that one of the things Macron is trying to change is the pension de reversion, or the surviving spouse's pension. Under the current system, if my neighbour's husband dies she would get just over 50% of his pension (I can't remember the exact figure), which would give her €1,400/month as a widow. It's not much to live on round here but she said she could probably just about make it as their house is paid off. Under Macron's new scheme that would go out the window, to be replaced across the board with a widow's pension of €1,000/month - and there's no way she could manage on that! And I agree, that would be more than tight in this region, even without having to pay a mortgage! This is over-simplifying the subject but basically Macron's plans would involve people working longer for lower pensions. The current situation is, of course, unsustainable (as it is everywhere), but from what I hear Macron is going about it completely the wrong way and, as my neighbour says, what would a former investment banker know about struggling on a tiny pension? Nothing right! I don't know how the issue will be resolved but one thing I know for sure is that my son who works in France as a plumber shouldn't count on living on just the state pension when he reaches retirement age. Just like in the UK, it isn't a viable wage. For him/them, I think the way to go is to buy a small property, do it up and rent it out for additional income. Round here, given the proximity to Geneva, you will never lose out going into the property market. But it's tough out there - and again I'm so eternally grateful to have a decent pension and excellent health insurance. Frankly, the alternative doesn't bear thinking about!
Posted by Treaders at 09:22