On Saturday I went for my first ever lesson in cake decorating and thoroughly enjoyed myself, although I have to say it is more difficult than it looks. I have to admit I tend to be a bit "slap dash" and kinda think "oh, I've got this" and then find out that really I haven't! I ended up with quite a few holes in the icing because I rolled it too thin but for a first attempt it wasn't bad. 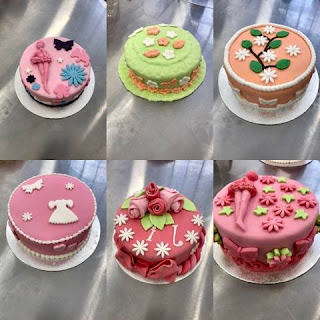 These are the cakes we six ladies decorated - not bad for first efforts are they (mine's the green hat in the middle)!

It was a bit hectic to be honest as I had people coming over on Saturday night so had to dash out and get some shopping in, then race into Geneva for my class, then back and get ready for our "board game evening".  A couple of years ago I had joined the local MJC (community centre, if you like) where they had a board game evening once a month. They said it started at 5 pm so I showed up at 5 on the dot, only to be surrounded by little kids playing tiddly-winks! Apparently the adults show up around 8 pm but nobody thought to let me know! I went a couple of times but as there were already established groups it was kind of difficult to integrate, although the people were nice, of course. Then last year, as we were having our annual neighbourhood clean up I got chatting with Valérie and she said how she would like to join too. Well we went a couple of times but again it was difficult to join in a group that was already used to each other, so rather inspiringly Valérie suggested we do it ourselves in our own homes once a month. So Saturday night was our first "date" at my place and though a couple couldn't make it we ended up being six in the end and had a great time.

I had bought the game "Big Mouth" where you put a kind of "mouth stretcher" in and then have to read words off a card and get your team mates to say them. It was so much fun. I got a great video of Isabelle trying to get her husband to get the phrase but I'll be buggered if I can get it to post. Still, here are a few pictures anyway! A great game if ever you need to liven things up a bit (but watch out for the drool)!