What a glorious weekend that was. Perfect autumn weather and temperatures with just the right mixture of relaxation and getting out and about thrown in.

I have mentioned before that my friends and I frequently go to the theatre to watch what is a very good and very large anglophone drama group. They put on some fabulous stuff and we get to watch plays and musicals that we probably wouldn't otherwise get to see. Simply Theatre is the kids group - ages 18 and under - so when I saw an ad for their latest show - The Magic Toy Shop - my friends and I booked for last Saturday. The show started at 17.30h so we figured it was going to be the younger kids performing, but in fact it turned out to be a simple two-man show, but which was excellent. The main protagonist, "Charlie", went to the magic toy shop as he wanted to be come a wizard's apprentice. The wizard - who conveniently enough was looking for an apprentice (how about that for a coincidence) - decided to set Charlie some tasks to see if he was worthy of becoming his apprentice! It took place on the small stage at the Academy itself and as people walked in Charlie and the Wizard greeted everyone and somehow managed to make a running list of the names of all the "important" people - i.e. the little kids - as they walked in. They called out to the kids by name asking for their help and put on what turned out to be such a great little show. We were the only ones without a little kid with us but it was so, so worth it. All the more so for me as I had a real little giggler sitting next to me and it was a joy to listen to her! 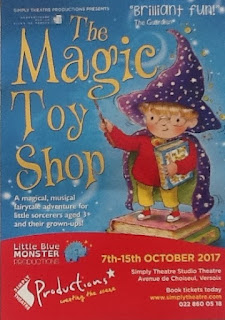 Then on Sunday, our local town held, for the first time, the Foire des Loisirs Créatifs (Creative Hobbies' Fair, I guess). This Fair was usually held in either Lyon or Grenoble but apparently having it in my local town was a roaring success, by all accounts.  Here's hoping it will be repeated. Not exactly a big Fair but good nonetheless. Rather foolishly I bought myself a couple of cross-stitch projects. Goodness knows when I will get time to do those but they were so pretty I just couldn't resist. And, being goody two-shoes, my friend and I decided to walk there and back so got in a 90-minute walk to boot. 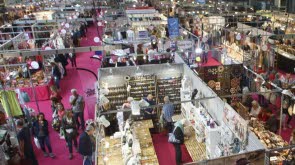 In fact, the ladies from my patchwork group were exhibiting some of their work there also and it really was very impressive!

On a totally different subject, a colleague hopped on the same bus to work as me this morning and we got chatting, as you do. Her mom and dad are over from England for three weeks and she was telling me that the neighbours' kids (aged about 7 or 8 I think) asked if they could "borrow" dad to take him to school for show and tell! Dad went along very happily, said there were some "bright little buttons" in those classes and was delighted to be prize exhibit no. 1 as the "funny little foreign man". I told her she should have sent her mom in too as her mom is German, but they thought  "one funny little foreigner" was probably enough for one day. He was really tickled when the kids asked if we had wild animals in England - he should have said yes, lions and tigers and bears, oh my! But I thought it was great that he went along with it all so willingly.

Which got me to thinking ..... year ago, my husband's nephew mailed to us here in France a "flat Stanley" (only this guy was "flat Justin" - for obvious reasons). For those that don't know, flat Justin was a school project that the kids sent wherever they could to friends and family all over to see how far he could travel in the given length of time. In our case flat Justin was about 4 feet tall and folded up nicely into an envelope to make his travel plans easier. We took flat Justin down to our favourite local restaurant and got the owners and kitchen staff to pose, somewhat emabarrasingly, for a photo with flat Justin before he was sent back to his home in Pittsburgh. Aaah, the things you do for kids eh!