Now what have I let myself in for!!

I got back off holiday late on Sunday night. Monday was back to work and Monday night was the "annual general meeting" of our patchwork club. It's funny really because the other sewing club I go to on Monday nights (I alternate) is pretty much tea and a natter - oh and you can bring a bit of sewing along if you want. But this one is much more serious. The lady president takes her job very seriously and in fairness does an excellent job. Now I had had about five hours sleep in the last 48 hours and really did not want to go but ... I also don't think it's right to just not show up to these things. Anyway, Marie droned on and on (in my exhausted opinion) about the different projects they would tackle during the year, plans for the club's 20th anniversary, the date for the Christmas dinner and so on. Also (and this is where she is so dynamic) she was sounding out the ladies' opinions on which kinds of techniques to develop over the year and any courses they would like to invite guest presenters to give. I am very much a beginner and haven't heard of half of these techniques and since 95% of this stuff takes place during the day when I am at work, as you can imagine I was starting to nod off. Then, towards the end, Marie pulled a rabbit out of her hat and, holding up a leaflet, asked what the ladies thought about maybe attending the annual quilting exhibition at the National Exhibition Centre (NEC) in Birmingham, England next year!

At that I stopped snoring and just gave a little laugh. When she asked why I laughed I told her that I grew up 20 minutes from the NEC and knew the place like the back of my hand. In fact, I had considered attending this exhibition this August but didn't get my act together in time to book flights. The NEC is a huge exhibition centre built right next to Birmingham airport and the quilting exhibition is apparently the biggest in Europe, hosting (I think) over 300 exhibitors and with 700 quilts being presented in competition last year!

So on a very preliminary show of hands around eight people said they might be interested, particularly now that "we have someone who speaks English going with us and who knows the area"! My mind immediately went into a mixture of panic and delirium, thinking "oh we could go to Stratford or Warwick Castle or to the Cotswolds" and so on and then I was hit with the thought of dragging 10 elderly French ladies round a massive conference centre and on an off the planes etc. ("Do we have to get pounds? How much is that in 'real' money? Ooooh isn't it scary driving on the left!" and so on). I tell you, I was so dog tired when I got home but still I couldn't sleep - I was having dreams of being chased round the NEC by elderly French ladies with zimmer frames.  Then of course I was dumb enough to mention that Birmingham had a massive "rag" market that was only 30 minutes away by train. Looking it up it has over 350 stalls (not all fabric stalls) but an absolute treasure trove of a market, so again my dreams switched to nightmares of losing an old biddy somewhere in central Birmingham!

My mind has calmed down a bit now, probably due to a decent night's sleep, but it could prove an interesting weekend if we manage to pin numbers/flights/hotel rooms down properly.  We'll see! 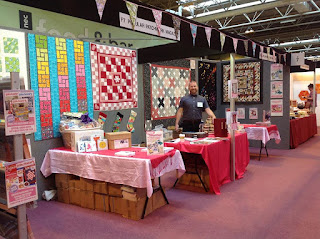 On a totally different subject, Tuesday night is the night our local food bank is open to its customers, so Tuesday is the night I take down my donations whenever I have a full crate of goods to donate. The door opens at 7 pm so I make sure to go around 8.30 pm in order not to embarrass any recipients (I have recognized a few people on occasion). When I got there last night the lady looked at me and said how great it was to see me because "take a look at our empty shelves"! I knew from last year that around this period their shelves really empty out as they are only allowed to collect donations outside supermarkets once a year at the end of October. There really was hardly anything left at all! The one older gent explained that they had collected less than expected last year and that there had been more and more demand so they were really hurting at this point to the point that the ladies had had to go out and spend some of the centre's financial donations in order to buy groceries. I was thinking maybe €500 or something like that but no, they spent €100 because they really had to try to eke out their finances!!!! Going down to the food bank always makes me eternally grateful to be in the financial situation that I am, but having just got back off holiday in Greece and to already be thinking about maybe going to Birmingham for what will be an expensive weekend at the NEC, really put into context exactly how lucky I and so many of us are! I make no apologies for my situation, but I sure am grateful for it!