Well that went quickly! Crikey! Still, even though time flew by it was a lovely, restful few days - well that is until I spent all those hours flying back! I mean, what kind of idiot flies west to the UK in order to fly back east to Greece? Me I guess. Problem is, in order to get into the same hotel as Steve I had to fly out of the UK so I ended up spending two nights in London before and after my trip. We'll have to re-think that next time, I think.

Still, it was lovely. I have always liked Greece but being able to go at the end of the summer season is wonderful. Nowhere near as hot as it can get in July and August and no crowds! What's not to like. The hotel was ok although had I been on my own I would not have chosen self-catering. But in the end, that was fine too and although I had no intention of "self-catering" anything, not having meals included in the deal meant that we avoided the breakfast, lunch and dinner crush in a buffet-style hotel.  Steve and I stayed on Pefkos Beach in one hotel and his brother and his wife a little further down the road. They were a lovely couple and while we didn't spend our days with them we went out with them a couple of times for dinner and/or drinks (and while both the men wanted to watch the rugby league final towards the end of our stay since I like rugby too that wasn't a problem). The other thing is his brother and wife were both sun birds and spent most days by the pool, while Steve and I dashed from cover to cover trying to stay out of the sun. I suppose in the end, we just did what they did all day except we did it in the shade.

We decided to avoid organized day trips because Rhodes really isn't very big and you can get around on the local buses anyway. I think the organized trip to Lindos was something like €40 and we paid €6 each on the local bus (a 15 minute trip). And oh how lovely Lindos was. 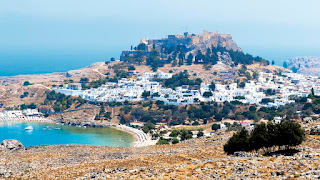 It's not very big at all but has streets like rabbit warrens full of lovely touristy shops. Add in some lovely spice smells and you could be in the souk in Marrakech! I bought a few table cloths/runners while I was there to brighten up my house. I'm sure Steve was thrilled being dragged round all the shops but being the good sport that he is he just kept nodding his head diligently and saying "that's nice". Aaah, love him!

We stumbled across a lovely little restaurant which really drew me because of all the greenery inside and it was a gem. There were only three couples in there (all Brits) and we quickly got chatting to the one couple. They were, I guess, in their 70s and I suspect the man was a widower as he had a ring on his wedding finger.  They explained that they were a couple - with him living in Edinburgh and her living in Brighton and they flew up and down the country regularly to meet up, and then shooting off to (usually) Greece or Spain when the fancy took them. The background music was lovely and at one point the man took her hand and waltzed her gently round the restaurant. It really was sweet to behold! 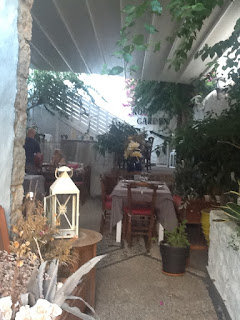 The owner spent much time chatting with all three couples and when we had finished our lovely main course, he came over with complementary cheese cake for us, followed by limoncello, followed by a shot of something else ..... Steve couldn't believe how friendly they were. In fact, we found everyone to be friendly and hard-working, but you certainly got an earful about "those b"""stards in government" if you had the inclination to listen (we did).

Our regular waiter at the hotel told us that 64% of the population had voted not to accept the bail out plan proposed by the European Union so "what did that jerk of a Prime Minister do? He double-crossed us! At least in the UK you had a vote on Brexit and went with it - that's what democracy is all about!" That was pretty much the sentiment we got from other Greeks too. Our waiter told us that out of season he worked on a small fishing boat with a licence to sell his catch in Lindos twice a week, but the cost of that licence had gone up from €700 last year to €1,800 this year with nothing in return. He worked extremely long days and said that while he was still a young man he could do it, but he was worried about what would happen later. Again, this sentiment was repeated by anyone we spoke to. There was also much resentment that the islands brought in tourist revenue which went straight back to Athens and none of it was reinvested on the islands!

Anyway, back to the plot. We spent a couple of days at the hotel reading (or yacking really - we could both yack for England) and then decided to catch another local bus to visit the old town of Rhodes. We spent a couple of very pleasant hours having lunch in the shade of a wonderful old tree before visiting the old town (more shopping for me, more bag-carrying for Steve). 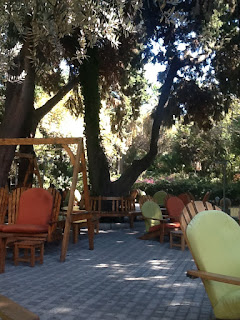 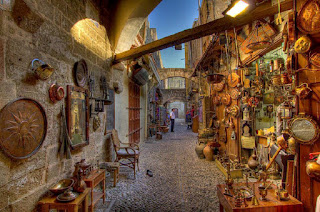 Then on my final night, dinner with Steve's family (the food was invariably good) and back to dear old Blighty for my flight back to Geneva next day.

The weather in Geneva is glorious, but after the temperatures in Greece I feel like I need my long-johns on! And 6 a.m. sure comes early when you have to get up to go to work .....