As I mentioned in a previous post, I flew out to Greece to meet up with Steve, a friend I met in Peru almost five years ago. We have remained in touch (albeit sporadically) over the years with him coming out to Geneva to visit me for a weekend a couple of years ago, and then again over Christmas 2016. The weather cooperated on that last trip and we had a good laugh together, I guess because we have a similar, very silly sense of humour!

I remember one day as we were driving somewhere Steve mentioned that he would shortly be visiting a friend who had a lovely house called The Round House "because it's round"! Bearing in mind we really didn't know each other that well I suppose it just isn't done to look at someone and say "ya don't say" (meaning "you pillock"!). I just laughed and he realized what he had said. Then when we were in Greece last week, he got talking to a couple in the lovely restaurant I mentioned in my previous post. He was telling them about a place we had "discovered" (another restaurant I think), and it would be easy for them to find "because the walls are white"! Again, I'm thinking "you pillock". What I actually said was "we're in Greece, all the walls are white"! At which point the lady he was speaking to burst out laughing!

I suppose I could be accused of being a bit "literal" myself too though, because I remember giving  one of my recipes to a colleague and saying "first open the packet"!!!! (If you are interested, I mix raw potato cubes with oil and a packet of dried onion soup mix. In the oven for about 45 minutes and "bingo" you have lovely oniony-tasting potatoes). Anyway, I digress, but somehow I don't think it was necessary to tell her to "first open the packet"!

Listening to Steve and his brother talk in Greece I think I know where he gets his "literal" thinking from - it seems it's genetic! Their dad was Polish and had fought in the Free Polish Army during WW2.  After the war he was given the choice of going back to Poland, or emigrating to either Canada or Britain. He chose Britain, where he met his future wife and the rest, as they say, is history!

Anyway, they were both laughing at how dad used to make his sandwiches for his lunch - how he would carefully spread whatever he was having on them to all four corners of the perfectly aligned sliced bread leaving nary an inch of bread uncovered.  Well one day, having bought a pair of shoes which were marked "waterproof", dad decided to find out if that was really true.  So he took a washing up bowl, filled it with water, put his shoes in and carefully weighted each shoe down with a can of baked beans - and then left them there to see if they really were "waterproof"!  I thought this was hilarious and asked if I could put it on my blog - to which the response was "of course".  So, in tribute to Marian W - also known as Charlie the Weaver (I guess we Brits couldn't get our heads around the name "Marian" for a man), I give you the saga of the waterproof shoes! 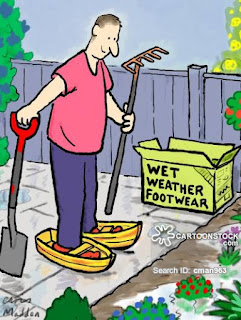