My colleague told me last night that he would be late this morning as his little boy was starting his first day at school. I told him to take plenty of pictures so that he can embarrass the hell out of him when he's 21 so he did. Really sweet pictures actually as his little boy was very good (probably because he hasn't yet realized he has to go back again tomorrow, but hey, that's part of tomorrow's fun right?).

We actually filmed my oldest son's first day going to the "big" school (he was five) and he whinged and cried the whole time, which is actually pretty funny now as he turned 29 yesterday! Ha, I knew it was worth the wait, the little bugger!

It did bring to mind an awful example of our dreadful parenting with him many years ago though. I was offered a job back in Switzerland when André was just 22 months old. It was a dreadful wrench for the US grandparents as he was their only grandchild at that point but as we were both unhappy we made the decision to move back to Europe. I came out to Switzerland ahead of my husband and son (they stayed in England with my parents for three weeks) in order for me to find an apartment, buy a car and find a place in a daycare as we knew my husband would have to find a job too. It was a very stressful time for me, trying to work full-time and set up the whole "family" side of things too, so-much-so that I actually ended up on beta blockers for a short period of time as my heart was beating 100-to-the-dozen. Still I managed to get it all done and they were able to come out and join me three weeks later.

Initially we were advised to put André in the daycare for just a short period of time in order for him to get used to it, more particularly since he didn't speak a word of French. Well, I had no choice so he was more or less thrown in full-time right from the get-go. I felt awful but what could I do?

My husband was lucky enough to find a temporary job straight away so early mornings were a rush, to say the least, what with the traffic and rush-hour and getting to daycare and work. One morning my husband was getting André ready and I was dealing with other stuff when André started playing up, he didn't want to go to the crèche, his feet hurt etc. We had just bought him new shoes and were pretty pissed off that he was play-acting right now when we were in a rush to get to work. I remember my husband yelled at him and I could have cried.

Anyway, we did make it to the crèche and I explained to the owner that he was having a "bit of a hissy fit" and complaining about his new shoes hurting (he hobbled all the way up the path!!!). She said not to worry, that he would get over it but to just get on and leave. So she took him on her lap in order to make a bit of fuss of him and took off his shoes to put his slippers on. When she took off his shoes she found the padding paper in the toes that my husband hadn't thought to take out! Poor kid, it's a wonder he could stand up. I feel bad about it to this day but we laugh about it now of course. I'm sure we've all done dreadful things like that but hey ... we all make mistakes right? Tell me it's not just me! 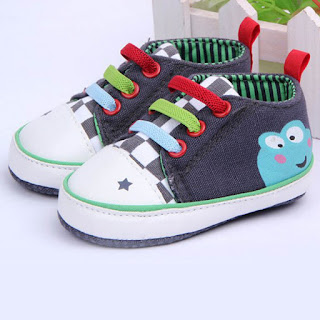