It's been a while

I can see it's been a while since I last posted, but I have been extremely busy (which I like) and I have to admit the horrific events of recent weeks have meant that I haven't felt like posting anyway. I mean, what right do I have to post about the banalities of my life when there are such awful things happening! Obviously I am more aware of what has been happening in France but the madness has been taking place everywhere! I did give some thought to just stopping reading the news entirely on the grounds that "the big stuff" would filter through to me eventually anyway and the smaller events, about which I could do nothing anyway, would pass on by without my being any the wiser. I know a couple of people who do this and it works for them, although I don't know that I am ready to cut myself off completely just yet. We'll see.

Talking of lunacy, on Thursday Geneva airport went into virtual lockdown due to "specific information received" by the Swiss authorities from their French counterparts. The roads around the airport were backlogged and although passengers were allowed into the terminal it was very slow going. It turns out that a woman from Annecy had called in "information about a possible terrorist threat". Seemingly she was a jealous wife who wanted to make life difficult (impossible?) for her husband who would be travelling through the airport that day!!!! Jesus H ...... I can think of a million ways of making my ex's life difficult without doing something as insane as that! Well the French moved quickly and she was hauled into court the next day. Given a six-month prison sentence - three months suspended and three months inside! I think in other times that might have been seen as harsh but in today's climate I can only say "foolish, foolish woman" and well done the French for moving so quickly and (hopefully) setting an example! Not sure how that stunt improved their marriage though!

On another note, I was pleasantly surprised to see Hugh Fernley Whittingstall back on TV last week in his war on waste. This time his major gripe was against the three major coffee sellers in the UK and their supposedly recyclable cups. It turns out that while the outer part of the cups are indeed recyclable, the inner lining is plastic and not recyclable, so while most people think they are doing their bit by putting their cups in the recycling bins it is a waste of time. In fact, there is only one facility in the UK capable of handling these cups and and none of the big three send their cups to this facility! But then, as the Mean Queen said, it beats me why people have to walk around with their coffee anyway. Why don't they have a cup before they leave for work or when they get there - saves waste and money! On the other hand, the big success story last week would seem to be the amazing drop in the use of plastic bags since England introduced a 5p charge for each bag in major stores. If I remember correctly, the number of bags distributed in England dropped by 6 billion since the introduction of the charge, although what took them so long to introduce it when others have been doing it for ages beats me!

In other news I finally got round to preparing my son's first US tax return last week. As a US citizen he has to file both here in France and in the US (pain in the butt that is I can tell you). He doesn't owe anything in the US because there is a foreign-earned income exclusion of over $100,000 (I wish) for those living outside the US but he has to file anyway. So while the filing was late he won't owe anyway. Since he is also going to do another two years' apprenticeship (he qualified as a plumber in June but wants to take additional courses for two years) I also filled out the school forms for him for the next year. So with everything finally being sent off I thought I would stop over to take copies up for him on Sunday. He lives about 20 minutes from me in a lovely quiet little village in the mountains. Absolute tranquility! I had thought when he and his girlfriend started looking for an apartment together that they might want to be in town, but not a bit of it. They both love the mountains and the little villages so chose an apartment "in the back of beyond" almost. But good luck to them. 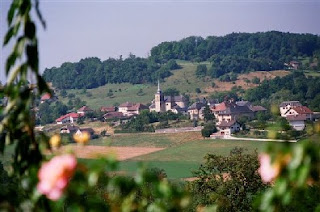 After I left him I decided to head off to Samoens as I had seen that they were having a vide-grenier (car boot/yard sale) up there. My son told me how to take a back route and I was up there in only 20 minutes. On the way out of his village I passed the local "farm shop" where you take what you want and if no-one is there you just leave your money in an honesty box! How lovely is that! I didn't stop in but I will next time. Anyway, it turns out the vide-grenier in Samoens is today not yesterday (which explains why it wasn't that busy) but it was lovely to spend a few hours up there just pottering around. (The sign you can just make out on the wall of the Town Hall in the photo reads "Soutien à la ville de Nice" - "Support to the town of Nice")!

The weather was lovely when I left home in the morning but started to turn when I was up there so after a little potter round I left and just made it home before the heavens opened!

When I got home I called my brother (the one who lost his wife in January) and we got talking about how life can be lonely sometimes. He was a saying that while he would never even want to try to replace his wife he would like some companionship, just someone to go to lunch with or maybe to the cinema. I understand absolutely and to be honest I think he is doing amazingly well. He joined the Ramblers, a widows and widowers' group and the University of the Third Age. Now this group seems to do amazing things in the UK - I am so impressed - but when I looked up the equivalent here in Geneva or in France it strikes me as more geared towards the arts and literature - and that's something that I am not interested in joining a group for. In any case most of their activites take place during the day time, and I am still working, so that's pretty much ruled that group out.

While surfing though I happened to stumble across a group called Quintonic, and it is designed for the over-50s who are looking to meet up for various activities.  It is not a dating site (I'm not looking for that in any case) but it would be nice to meet older people outside the work environment to talk about things other than work. Anyway, I will give it a shot and see if anything pans out.

OH, as I may have mentioned before, is Dutch and while I was "site surfing" I found a free online site where you can learn various things (thanks to Jane at Shoestring Cottage) and guess what, they offer a free course in Dutch! Now I love languages and am game for most things so I have enrolled.  Watch this space - but don't stand too close as I suspect I will be spitting all over the shop trying to get the pronunciation right!  We'll see if it impresses OH - although somehow I doubt it!

And finally, today is Swiss national day (oh if only the traffic was this easy every day). So Switzerland is pretty much "closed for business", except for the likes of me who have to work. But I am sitting here at my desk, with a view of the lake, listening to fabulous salsa music being played in the park behind me - what's not to love!
Posted by Treaders at 15:38