When my little neighbourhood got together (in July?) to do our annual clean up, my neighbour's daughter suggested a small group of us got together for a potluck lunch one last time before one couple, Marc and Valérie, moved out. With just one daughter left at home they now find their house too large for them, so they decided to sell up and look for something smaller. They put the house on the market and it sold really quickly - in fact, I think they move out in September. It will be our loss as they are such a lovely couple, and while they are not moving far it won't be the same somehow. My immediate neighbours very kindly offered to host it and we really lucked out in that after a wet and miserable Friday, that Saturday turned out just scorching. 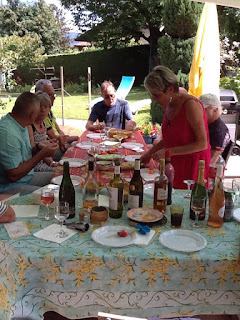 The food was lovely, although of course there was way too much, and the company excellent - just ripe for a bit of silliness I guess (so that would be where I come in of course).  One time when I was England my sister had bought me a game called "Doughnuts", which I took round and dared everyone to have a go.

We had a silly half hour, with everyone cheating like mad, but it certainly added up to good fun!

Then, just in case we hadn't been silly enough, I got out my ipad and started taking pictures using an app that my niece from Denmark had shown me. Wait for it, it gets better!

And then there was Dani! 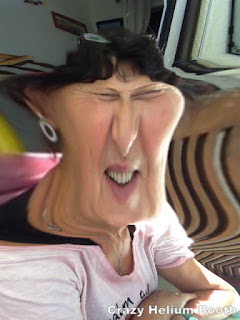 And last of all, another version of me! 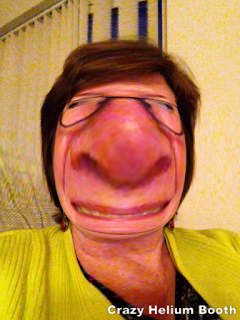 I tell you, if you ever need an ice-breaker, this certainly did it. Of course another really good ice breaker is to take a copy of Fifty Shades of Grey down to the local pub and get your poshest friend to read out a random extract from it (but I guess that will have to wait for another time!) In fact, Michel came round last night and asked me how to download the app and how to use it. Maybe it's just me but I love "silly".

So after a very long, protracted, but hilarious lunch (about six hours all in all - well it is France), we all said our goodbyes and staggered home bearing enough left-over food to feed an army.

Then on Sunday it was the last day of the local Bluegrass Festival. This is an annual six-day event in my small town which features about 30 bands from all over the world, although oddly enough the majority seem to be from Eastern Europe (the Czech Republic and Russia are very well represented). I think the original idea many years ago was that different towns worldwide would host this event but apparently La Roche did it so well that it has hosted it ever since - well certainly for the last 11 years that I can remember. It is a fabulous event featuring extremely talented musicians, with food and drinks stalls, souvenir stalls and everything in between. Again, as another sign of the times, the roads around the event were blocked off with concrete bollards to stop any through traffic, just like in Geneva at the moment, but if that is the price we have to pay for greater security I'm happy to pay it! 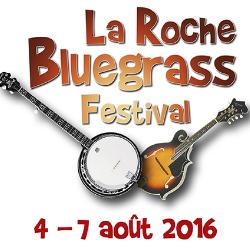