There are many great things about working in Geneva, not least of all the beautiful scenery, Lake Geneva and the mountain backdrops.  Because of the many multinationals, the banks and the international organizations, it is also a highly multicultural city, which I happen to love.  I mean, if you want to make Korean food you can find Korean ingredients.  If you want to learn belly-dancing you can find the lessons, if you want to speak Mongolian .... you get the drift.

One of the great things about being multicultural is that there is an enormous anglophone community.  Now, I love living in France and am happy to speak French every day but there is something about being able to go to the cinema or theatre in English that is just great.  When I say "anglophone" I don't necessarily mean native English speakers, but for every foreigner here who doesn't speak French there will be at least one who speaks English fluently, even as a second language.

We are fortunate to have two excellent organizations - GAOS - Geneva Amateur Operatic Society and GEDS - Geneva English Drama Society - who do a great job of putting on play-readings, shows and even the traditional Christmas panto!

This weekend a friend and I went to see them perform Cabaret ("Money makes the world go around") and what a great job they did, particularly bearing in mind these are "amateurs" and most have full-time jobs to boot! 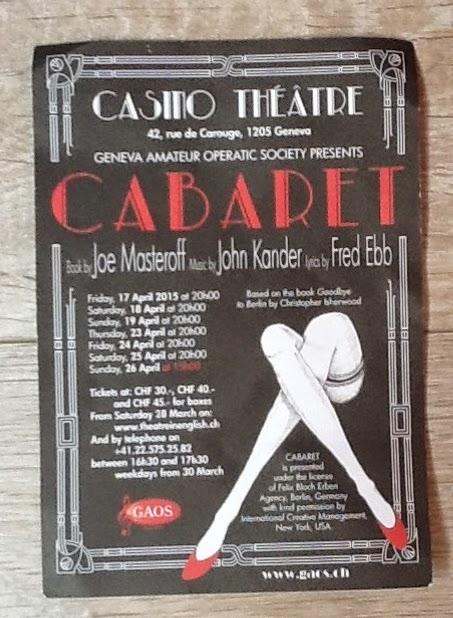 I had seen the Liza Minnelli movie of course many years ago and while the music was excellent I never really understood it, indeed found it bizarre.  This time round and being that much older I understood the significance of it all and I was very, very impressed, not only with the story behind the story but also the wonderful job done by the Geneva team.
A couple of years ago﻿ my two sons and one of their girlfriends went to the U.S. to visit their grandparents in Pittsburgh and then flew to New York to spend a couple of days in the Big Apple.  They wanted to see a show on Broadway but the only one they could afford was Mary Poppins. Well as you can imagine the boys weren't too thrilled about going to see Mary Poppins, but Lily (being the boss) insisted.  The boys later admitted it was absolutely amazing and said that they thoroughly enjoyed it (even taking into account the Italians sitting next to them laughing and clapping and loudly shouting out "Bravo, Bravo, Bravissimo"!)  They were delighted.
I'm not sure they have developed a taste for the theatre (boys being boys - or maybe just "my boys being my boys") but for me, it is a little piece of escapism that I thoroughly enjoy.  Who knows, one day when I have more time I may even get involved - I'm sure they need more people to help move the furniture around (that being the extent of my "artistic" talent!).  Strangely enough, it was only when I came to Geneva that I realized how "weird" we Brits must look at panto time.  But I mean, when the beautiful princess can't see that the handsome prince is really a young woman in knickerbockers, and the wicked stepmother is ALWAYS the one with the pointy nose with a wart on it, and nobody notices that the ugly sisters are actually men, despite an amazing tendency towards designer stubble, AND the actors can never see the plastic dragon that is always "behind you" - I mean, what's not to understand!  Maybe we Brits aren't weird - maybe it's "them"!
﻿
Posted by Treaders at 14:12