Knickerless shorthand (not what you think)

I got my first job as a young secretary in Switzerland in 1980 at the age of 21.  In those days it was normal to take dictation and I have to admit, even today when you don't "need" shorthand, it is still a wonderful skill to possess.

Nobody liked taking dictation from one of our Indian bosses for the simple reason that he was capable of dictating sentences that were a page long and you had to try to decipher them.  To give him his due, often they did make sense but man was it difficult to get it all back on paper.

This one particular day I was just getting over a bout of bronchitis when I got called in for dictation.  It started with a small cough, then got worse until I was spluttering and coughing like nobody's business.  Eventually I asked him to excuse me while I got a drink of water.  Thinking it would be more appropriate to regurgitate a lung in private I dashed off to the toilets.  While I was there I thought I may as well have a pee so shot into the loo to do the necessary.  The only problem was, as I was sitting there the cough got worse and worse until I eventually couldn't contain it any more and I actually threw up - right into my knickers.

Now what to do with underwear full of chuck-up can be somewhat of a dilemma.  So not knowing what else to do, I took them off, rinsed them and threw them in the bin.  Of course I then had to go back to taking dictation, minus my knickers!!!!  I mean, what the heck!  But what else could I do?  Needless to say, I kept a very demure pose for the rest of the dictation. 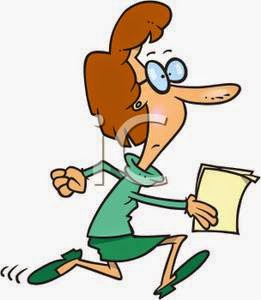