Talking of my "silent to-do list", I finally got around to sorting the last of my ex's paperwork the other day and while I've thrown some of the "neutral" stuff, the rest - the stuff that didn't need to be kept - I need to be putting through the shredder as and when. Gosh I wish I had access to the big shredder we had at work which would make short shrift of those papers but I don't, so I'll have to make do with shredding what I can with my crappy little paper shredder. Then André and I got to chatting about work and different stuff and how it takes a while to get accustomed to the lingo used in your particular work setting. When I first worked at the large international organization where I spent most of my working life, the "members" were referred to as "the contracting parties", later to be changed to "member States", and I remember one huge document that had been sent out where someone must have messed up on the spell-check because "contracting parties" had been changed to "contracting pastries" all the way through the 250-odd page document. Then the other night, when we were watching an old episode of The Big Bang Theory, Amy and Sheldon were playing verbal ping pong and using the expression ipso facto. This is wording that could easily have been used in the large agreements that we typed up where I worked and I remember someone - some poor young sod - sent out a whole document where ipso facto had been changed to if so fatso! But damn we had some fun - maybe not at the time but can you imagine sending that document out to government agencies all over the world!

Yesterday, I and two neighbours decided to set off back down to the lake at Passy in order to stop in at the Quechua store to buy snow shoes. When we got there would you believe it but they were sold out yet again! I reckon since people can't go downhill skiing at the moment because the ski lifts are not running, if they aren't doing cross country skiing then everyone and his grandmother must be buying snowshoes. I'll give it another try during the week to see if they have been restocked but at the moment snow shoes are rarer than hen's teeth. Either way, my neighbour Isa, and my other neighbour D (who had been ill this week), decided to have a quiet stroll round the lake at Passy and again it was wonderful. The weather was glorious and so sunny, even though the wind was absolutely howling. I commented that we looked like Charlie's Angels plodding around the lake in the wind, but in reality I reckon we probably looked more like The Three Stooges! 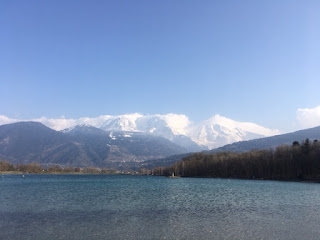 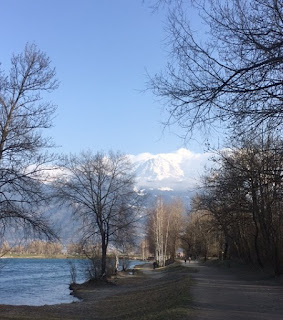 Then yesterday morning I got caught out for the second time slobbing around in my sweatpants and mucky t-shirt. As I was taking stuff out to the car to take to the tip a young gendarme stopped by and asked if I had seen anything unusual last night because the D family had had two of their car's tyres slashed during the night. I explained that while my bathroom looked out towards their home and I did, indeed, go to bed very late, I hadn't seen or heard anything. At this point he asked me if I was English because he detected "un petit accent", but when I said yes he said said the cup of tea in my hand also gave me away. I laughed and told him that I had put in for citizenship and apparently at some point I will have to have a visit from the gendarmerie so I hoped he would be nice to me! But seeing how it was the D family that got their SUV tyres spiked I can't say I'm really surprised. I have to have dealings with dad as he is the President of our Home Owners' Association and I am the Treasurer, and for that I have no problem, but I don't trust him any further than I can throw him. If it's his son who was targeted in the "tyre stabbing" I can't say I'd be overly surprised either because, apparently, he's an arsehole just like his dad. He drives around our little neighbourhood like a lunatic, never thinking there might be other cars on the road and - who knows - little kids playing on their bikes. So yeah, I can well imagine that someone, somewhere, doesn't like this family. I'm just glad to keep out of it!

Which reminds me of years ago - I was dating my lovely Algerian medical student/doctor/now surgeon. We were great together but I was getting fed up of feeling that we were never going anywhere. Goodness knows the fact that he was (nominally) a Muslim while I was (nominally) a Christian made no difference to either of us. He was, and still is, to this day, a great guy. But I got fed up of waiting. Waiting to live together, waiting to maybe establish a family together. Hell, I didn't care if we didn't get married. His mom loved me. His dad hated me, but then his dad hated everyone so that didn't bother me too much. But in 1982 I'd had enough of waiting for Karim to make his mind up what he wanted to do so I applied to Australia to get a six-month working visa for the under-25s and off I went. My idea was to break with him completely because as lovely as he was (and still is), it was going nowhere. So off I went to Australia for six months, had an absolute blast, but ultimately I knew I wanted to come back to Europe to live. So Karim picked me up from the airport after six months apart and then took me out to dinner. But damn, he was so formal! In French if you address someone as "tu" it's informal, but if you address someone as "vous" it's formal, and I remember asking him if he would be more comfortable addressing me as "vous" because he was so weird! That's when he told me that he had met someone during my absence and he wanted to continue seeing her. And that's when I told him I had met someone in Australia and that was fine by me. WELL, you'd think I'd let off a nuclear rocket because all of a sudden he no longer wanted to break up with me, he bought flowers every single morning and waited outside my house every morning to take me to work because my car was still in storage. He begged me to get back with him and in the end I relented. But damn, I'd gone to Australia to get away from him right? Buuuut, what I didn't know is that the girlfriend wasn't totally in agreement with them splitting up. Now at that time in Geneva my surname was the only one in the phone book so I'm guessing the gf found out where I lived. I remember getting a phone call at about 4 a.m. one morning asking for Dr. F and when I said I would pass him to her she hung up. Next morning when he went out to go to work he found he had two flat tyres, but when he took the car to the garage it turned out that someone had slashed both of them. Yikes, someone was a bit hormonal I guess!

Anyway, yesterday André went to band practice at his mate's house and stayed over because of the 18h curfew here so I had the evening to myself. I decided it was finally time to get back to watching The Crown - series 3 and it was great. It's the new series with Olivia Coleman as the Queen. It was really interesting seeing the "reality" of the 1964 election win of Harold Wilson - who I remember of course - and the story behind the Anthony Blunt spy story. As I say, I remember all this but as I was just a young girl it didn't have any meaning for me so as time goes on it has more and more meaning. One thing I have to say is how wonderful I think John Lithgow was as Winston Churchill. Oh others have done it, of course - equally well probably - but he really captured not only the gruff Churchill but absolutely nailed the accent!

Then today Jen asked if they could bring over a baby car seat for me - only five weeks to go folks - so I invited them to eat over at my place. Jen had agreed with Anaëlle, our neighbour's 15 year old daughter, that she would clean her car for pocket money so they stopped over at 10 a.m. While we were chatting Jordan set to and tried to break up the tyres that I have hanging around with my new angle grinder in order for me to take them to the tip. Then Marylène, my other neighbour, came out and was showing me how her hand was still bothering her after her operation so Jen, as a nurse, came over and reset her splint in order for it to stop bothering her. Then I stopped in at Marylène's to drop off some French books that Jen had given Isabelle, so we all ended up outside in the spring sunshine chatting away and doing all the different things that needed to be done. I pointed out that it was like a kibbutz and Marylène and Isa said that yes it was, indeed, like a kibbutz, and did I remember when .... But you know, I now realize how much I enjoy that. Oh, I'm perfectly fine not having a partner and I really do enjoy my own company, but today brought home to me how much I enjoy being part of a society that just pitches in to help each other and shares whatever they have. I just loved it when the kids were little and I would have goodness knows how many little kids in my house playing together.  Heck, as Jordan and Jen were about to leave they couldn't get Jen's car started so another neighbour came over with jumper cables and got it started that way. So yeah, I like being on my own, but I think it's sooooo nice to have the "look out for your neighbour" experience. Oddly enough, it seems that that's one of the selling points for our little lotissement, as one of the new buyers pointed out the other day - we all look out for each other and it feels like a little kibbutz! And you know what, that's fine by me!