When I was still going to my local MJC (community centre) for pilates classes I spotted that they had instigated "repair cafés" twice a month. Now I knew they had them in Geneva already but I wasn't aware of any here locally in France, so I was keen to stop in and see how they work. Amongst the myriad things that are "wrong" with this world, recycling is something that has always interested me. Oh lots of other things interest me too but since I don't feel that I, personally, can make much difference in the larger scheme of things, it's better to start local, right? Unfortunately the pandemic threw the world into chaos and everywhere has been shut down, opened up, shut down again and so on. But one thing I did do was join the group responsible for the repair café called "TransitionlaRoche" (or something like that). They seem to be pretty active on many fronts actually - encouraging the use of public transport rather than the car (difficult round here though), they've negotiated with the Mairie to offer up to €400 to anyone wishing to purchase a bike for commuting purposes, they are active in local government and so on - but it's the "zero waste/recycling" part that interests me. Anyway, since we're not in total lockdown (although still subject to curfew), I see that they are again holding repair cafés on Saturday mornings and will shortly be having another meeting on how to encourage zero waste, so I think I might go along. I am a bit leery of getting more actively engaged with such a group because while I'm happy to volunteer, pre-covid my life was pretty full anyway, and with a new grandchild shortly to put in an appearance my time will be more limited - but I guess we can see how it plays out. It's nice to find a group locally that appeals to your interests though isn't it!

On Tuesday I have my appointment with the Préfecture in Annecy to (hopefully) finalize my resident's permit. Apparently I only have to bring my passport and two photos but I will be taking a whole bunch of other stuff to justify my claim to residence "just in case". Mind you, seeing the photos I had done the other day I'm keeping my fingers crossed that they won't burst out laughing and just refuse me on the grounds that the don't accept "battleaxe" photos. I know you're not allowed to smile anyway but seriously, I'm going to be left with that mugshot for the next 10 years? Eeww!

On Wednesday my neighbour asked me if I wanted to get in a quick walk before curfew as she was going stir crazy so I thought why not. We stayed out of the woods though as it has been raining pretty heavily and we wanted to avoid the mud, so walked around the local neighbourhood and got in a good one-hour walk. Well that is until we passed a house just down the road from here where a dog came crashing out of the garden and bit me on the back of my leg! My guess is that someone had driven out and not closed the gates behind them, but this rather large hunting-type dog came snarling out and actually drew blood and ripped my trousers! While I wasn't hurt my neighbour yelled for the woman owner to get out here and take a look at what her dog had done. She apologized profusely and said she would pay for any damage (to my trousers or medical costs), but it was only a minor wound and as for the trousers - well, I'm not that bothered. But my neighbour read her the riot act about controlling her dog, particularly as it could have been a child that was attacked. My friend says I should report it to the police anyway but the jury's still out on that one! I probably will though, I just need time to think about it! That actually reminds me of when I was in Alice Springs on my "round Australia" trip in 1983. I spotted a nasty looking dog with froth coming out of his mouth and was just about to tell my friend to "watch out for the dog" when he turned around and bit me too (I guess my left calf muscle must look pretty tasty to dogs then). We went to the local hospital where the nurse told me that as my tetanus shot was up-to-date they wouldn't do anything as "they don't have rabies in Australia". It must have been true because I'm still here, but getting bitten by a rabid-looking dog is not particularly confidence-inspiring, I can tell you!

Other than that, there's not much going on of course. You know you're probably getting covid boredom when you're pleased that you can now recognize the sound of the post van coming down the road don't you! André came downstairs the other day and asked if I had seen the amazing colour of the sky - sepia coloured, he called it. And it was indeed sepia coloured, due, apparently to a phenomenon called the Sirocco Phenomenon (I did not know that, but then again there's an awful lot I don't know), which picks up sand in the Sahara and dumps it in Europe wherever the rain is heading that day. Mind you, when I saw the state of my windows and car, "sepia coloured" didn't immediately spring to mind. "Crap coloured" was more appropriate I think - you should have seen the line waiting at the car wash! 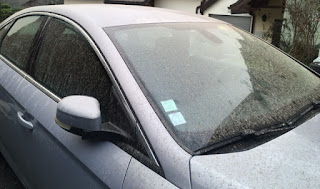 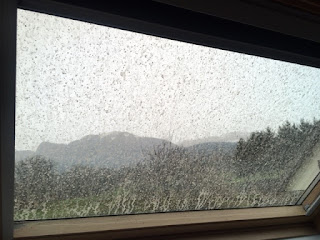 And finally, in response to Northern Living Allowance's blog post (nice to see you back) about covid weight gain, heck I thought my dryer was shrinking my clothes - turns out it's my fridge!