I was watching the news earlier today and see that Captain Tom, the nation's covid hero, has just died of pneumonia after being hospitalized with covid. Of course at 100 years old it was logical that he wasn't going to live for many more years, but as someone who will have been shielding at home it makes me wonder how he actually caught covid all the same. The sad thing is, with the pandemic still raging he won't be afforded the kind of funeral that I'm sure many would have wished to give him. Nevertheless, RIP Captain Tom!

As I once again figured I'd have a go at losing a bit of weight (or even a lot of weight), I decided to do a repeat of Dry January this year and again found it surprisingly easy. I have to admit I did have one drink - a glass of mulled wine when I was out walking with my neighbour in the mountains the other week - but other than that nope, not a single drink since just after Christmas. While I didn't expect miracles I thought I might lose a few pounds, but despite "instantly" losing 4 lbs, a couple of days later I was back up 4 lbs so I'm back to my starting point, even though I've been out walking and eating pretty healthily. So I guess it's portion control from here on in but, damn, it's hard when you've got a human hoover living with you! 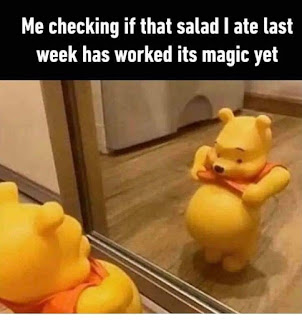 Bit by bit I've been going through more files that my ex left behind and so far there've been no more horrible surprises, although some of the documents he left behind should actually be important to him - tax documents and such - but hell, since when did it become my responsibility to sort and file that stuff? I did find an entire file relating to various campers we've had over the years so kept the buy/sell paperwork and pitched the rest. Looking at the papers I see that we bought our first camper in 1996, when the kids would have been four and eight. I remember our second outing in the van, when we were still trying to figure out what all the buttons and switches were for, we decided to leave straight after work on a Friday night and head down to a reservoir called the Barrage de Serre-Ponçon. This involved a five-hour trip down the route de Napoléon and us ending up arriving around midnight. We'd called ahead to let them know we'd be arriving late so they told us to just pull in and hook up without making any noise and we could register in the morning. The kids were already fast asleep at that point, but that night the wind picked up and ended up blowing a hoolie, rocking the camper from side-to-side and me wondering what the hell we'd let ourselves in for. That is, until the next morning when we opened up the blinds to the most magical view of the reservoir against a mountain backdrop. It was just stunning! I was talking to André about it this morning and he said he remembers how much fun it was playing with other kids in the swimming pool and running around the camp site all day - it felt like a week's holiday crammed into a weekend!

In other news, I was reading the other night when I saw that The Pirates of the Caribbean  - Salazar's Revenge was on. I think I might have seen the first film but none of its sequels - I usually don't have the patience to sit and watch TV anyway. I have to say, though, that however messed up Johnny Depp may be in real life, he absolutely nailed Jack Sparrow! In addition to that I realized that Javier Bardem was playing Salazar and I just love Javier. I find him so sexy (although maybe not in full Salazar make-up) and deliciously evil so I did watch a bit of it just to drool! He kinda has the brooding good looks of a young Al Pacino in The Godfather and the sexy voice to go with it!
Then the next night Skyfall was on and yet again Bardem was playing the baddie. I really don't like him "as a blond" but still, he was a great baddie, even if I don't care for the Bond films at all! There's been some talk about who should replace Daniel Craig as the next Bond and I have to say I'd have a hard time choosing between the two potential front-runners - Tom Hardy and Idris Elba. They've both got that kind of twinkle in the eye that to my mind Daniel Craig lacks - but I don't suppose anybody cares what I think do they!
I stopped over to see Jen again today and she's doing well, although still being good about laying on the sofa as much as possible and not going out. She's 31 weeks pregnant today so it's going in the right direction thankfully. The weather's been crap here for the last few days but just as I was heading home the rain stopped and the sun broke through the clouds so I had to pull over and take a quick snap of the mountains as they were so lovely! 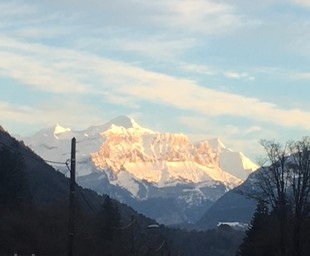 When I got back Max was at the house, having come over to check on my heating system (or, more likely, to have a beer with André)! He was asking what all the tyres were doing in front of the house and I told him that André and I have been lugging them up from the basement so that I can throw them in my car as and when and take them to the tip. Yesterday I asked at the tip where I should put the tyres that were on rims and when he told me I had to separate the tyres from the rims first I just thought "here we go again, something else that I've got to figure out how to do"! Max was somewhat incredulous that we wouldn't even try to sell the tyres/rims that were in decent shape. I don't care about the money but I agree I don't like the idea of just throwing out something that can be of use to someone else. Admittedly that kind of stuff gets put to one side at the tip but still. So while he was standing there Max took a few photos and posted six tyres/rims on Le Bon Coin (a local buy/sell/exchange paper) and within five minutes he'd gotten three enquiries, so hopefully they will sell pretty quickly and be taken off my hands. If they do sell, any money they make will be put towards more musical equipment for their band so I might get Max to come over next time I've got a load of stuff I need to get rid of. I guess some people are "sellers" and some are not - and seemingly André and I fall into the "not" category. Like I say, easy come, easy go, right!
Posted by Treaders at 20:48