The weather these past few days has been glorious - and it's forecast to continue next week, from what I can see. Today we had 17°C (62°F) and bright sunshine, so as hard as I tried I just couldn't come up with an excuse not to get off my backside and go out walking. Actually it was a bit of a cop-out because I should have left earlier and I should also have chosen a place to walk that is somewhat more challenging! But what can I say, I ended up back down at the lake at Passy again this afternoon. Well that would be me and half of Haute Savoie, from what I could see! When I got there the first parking lot was pretty full, but there was still plenty of room in the second one. Then I realized it was busy because it was spring break. France divides its school districts into three zones and, under normal circumstances, this would be spring break for our zone. For the next six weeks we would normally have a constant influx of foreign and out-of-state registered cars coming here for the skiing, but since the borders are closed and the ski lifts aren't running, it's been pretty quiet round here! That's great for the likes of me, of course, but it must still be devastating for the resorts which desperately need the winter season to make their money!
Just before the turnoff to get to the lake there is a large sporting goods store (Quechua) that supplies most of the local sports outlets round here, so I decided to stop in and check it out. It's very spacious, has everything you could wish for in the field of sports and pretty reasonably priced, from what I could tell. I was thrilled to see that they had a large selection of snowshoes, since Isabelle and I had looked for them a few weeks back as we'd agreed we'd like to try it out up at the Plâteau de Glières. I sent her a photo and she replied telling me to "get her some", but in fact you need more specialized assistance as there is a difference between snowshoes for men and for women, the kind of terrain you want to walk on and your weight (I guess this is one area I shouldn't lie about my weight then)!  I did get myself a pair of cheap, bright green, wrap-around reflective sunglasses which apparently cut the UV rays, and while they are not "designer" (as if I care), they did a great job given the bright sunlight and its reflection off both the lake and the snow!
The lake was great, with loads of people sunbathing, picnicking, BBQing, fishing and even a few hardy souls in the water - mainly little kids who decided they needed the water for their sandcastle-building endeavours. It was really just a stroll for me, but it gave me a chance to mess around with my Peakvisor app again and I finally figured out which of those mountains was really the Mont Blanc (the tallest mountain in Europe at 4,809 metres). Funny, I had it more over to the left ("left" obviously not being a technical geographical term)! 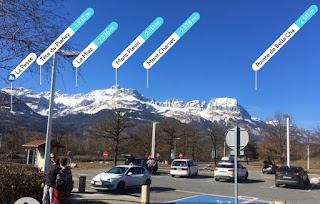 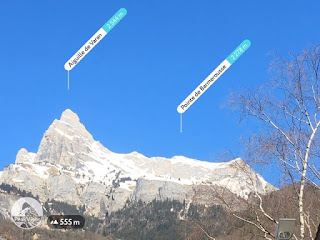 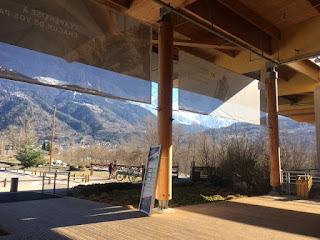 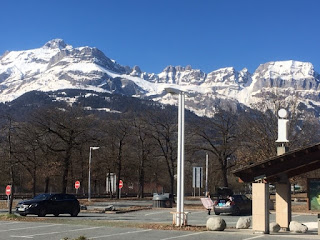 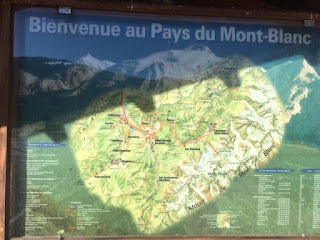 I had to keep an eye on the time in order to be back before curfew, but leaving around 4 p.m. I made it back in time to stop by the DIY store. I asked one of the employees where I could find the angle grinders and he kindly took me there and asked what I wanted it for ("I'm making a patchwork quilt")! He was a bit bemused when I told him that I had a bunch of tyres that I needed to separate from their rims in order to take them to the tip and that even with the help of both my sons I hadn't been able to do it, so I was going to cut them off! Not sure what he thought of that but I got the angle grinder and with a 10% discount! Actually Jordan had to go to the bank yesterday to deposit his $600 covid stimulus cheque  - thank you US treasury - and as it's a $$$ cheque being deposited into a €€€ account he has to go in in person. So he stopped up here for lunch with André and me and spent a good hour yacking with his brother. Again, it was great to have them both here, and when they got to talking about their first (piece of crap) cars, or the time Jordan was driving my car in the winter and the handbrake froze, they were doubled up laughing - me, not so much, when I heard that last bit!
The other night I spotted that they were showing a film on TV starring British actress Sheila Hancock. I think she's lovely and a very underrated actress so decided to sit and watch it as I had nothing else planned! Just like Shirley Valentine, it's not really a "man's" film (you would probably be bored out of your minds), but I actually enjoyed it. It's about an 83-year old widow who had been a lover of the great outdoors as a young girl, going hiking, fishing and canoeing with her father as a child. She met and married a man her family didn't particularly like and who proceeded to cut her off from them and the outside world, and turned into a monster she admitted she hated. In an effort to get her to start living a little again, when she was in her 50s her father sent her a postcard from Mount Sullivan in Scotland saying "one day we'll climb this together"! And she decided she would do just that! Except, her husband would hear nothing of it, went ballistic, and provoked a horrible argument, with him stamping his foot and throwing a fit when he realized she wouldn't back down. But the very next day, while still in his 50s, her husband had a massive stroke and never walked or spoke again - and her father died a couple of months later. She took care of her husband for the next 30 years, all the while hating the man, and when she one day decided that at the age of 83 she would, indeed, climb Mount Sullivan, everyone thought she'd gone stark, raving mad! Anyway, without giving away too much, Sheila Hancock did indeed climb up Mount Sullivan at the age of 84 (she's 87 now), often having to do several takes in order for them to get the close-ups and the distance shots. So ladies, if you would like to watch a gentle "ladies only" film, you could do worse than to watch Edie, Scottish actor Kevin Guthrie, as Sheila's co-star, also being very easy on the eye! 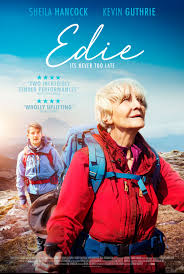 I'm also reading an excellent book in the Jodi Picoult genre called The Wife Between Us! I haven't finished it yet but it's turning into the kind of book I can't put down. I think it was a recommendation on The Richard and Judy Show (UK daytime chat show - that I never watch), but if you like some easy, but gripping reading, I can highly recommend it! 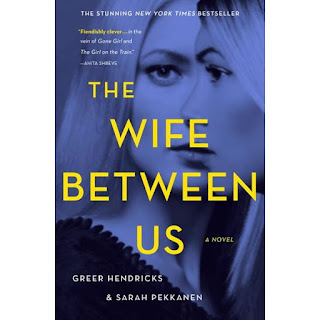 And finally, I recently saw on Youtube an interview with Ernestine Shepherd - "the world's oldest competitive female bodybuilder"! I don't know if she still holds that title but ... She only started working out at age 57 and is soon to be 85 and still going strong. She's a lovely lady and I find her so inspirational - well I guess that would be more believable if André wasn't staying over at Jordan's tonight and I hadn't discovered that he'd left a couple of beers in the garage! Ah well, there's always tomorrow!
Posted by Treaders at 21:17