Feeling a bit blah at the moment!

I know it's completely normal to feel down sometimes, especially in these difficult times, but I really don't like it and get annoyed at myself actually because I realize just how good I have it. I know - whaddaya gonna do? Well I know what I need to do and that's get out and start walking in such perfect weather - cold but sunny, so perfect walking weather. It's hard to give yourself a virtual kick up the butt though isn't it. Talking of cold, I finally got through to Max that he needed to come and look at my heating system/water heater as it is still leaking. He came over on Saturday morning with a new part, but four hours later he was cussing and swearing and he now reckons that there is a fault in the water heater and he's going to need to have the supplier come out and take a look at it. As luck would have it, when he switched me over to the fuel water heating system I hung on to my electric heater as it was only a year old and I reckoned Jordan and Jen might take it if/when they buy a fixer-upper. So now my water heater has been switched back to the electric heater but, since Saturday I no longer have any heat at all in my radiators! Bloody hell! As it stands right now I have two electric heaters running and hopefully Jordan will be showing up any minute now to take a look at the heating system. I suspect it's just a minor thing but since that stuff is all Dutch to me (as yet), I'd rather have him look at it than have me potentially screw it up!

On Friday I drove into Geneva for my two-yearly mammogram (aren't they fun ladies?) but I have to say I don't find it the least bit painful and I had the lovely South African lady doctor I had the last two times who is a blast. Last time she was telling me she was hoping to take a solo trip through Morocco in a camper van and maybe even chuck it all in and hit the road for a couple of years to enjoy her freedom. Well that didn't go according to plan since the two young Scandinavian women were murdered by "terrorist" thugs while out camping in the Atlas mountains (in Morocco) shortly before she went to book and as of Friday at least she still hasn't chucked it all in. She had planned to go back to South Africa for a vacation this summer too but obviously with the pandemic that was cancelled. She said she was lucky that Air France refunded the international portion of the trip but the domestic flight on South African Airways was lost since they have gone bust (I didn't know that)! Anyway, she told me that everything looked fine and she would send my results to my gynae the same day. And I was struck once again by just how luxurious this clinic is. It was where I had Jordan and it really was a pleasure to be in such a nice place, but then as I've mentioned before, it reflects the difference between Swiss health care prices and French prices I guess! After that I drove on to IKEA to have a look at the bathroom set-ups and it was actually ok. Not too crowded at all with everyone wearing masks and plenty of hand sanitizer available all over the shop. I held the lift doors for two women as I was going back down to the parking lot and the older woman and I laughed when we both took off our sweaters in the lift because the whole shop was just too hot. Or maybe as the lady said "ain't hormones wonderful"!

On Tuesday night I stopped in at the food bank in town as I had a case of goods to drop off. One of the ladies there knows I'm English and has started keeping English-language books for me and on Tuesday night she came running over with six nursery rhyme books for me! And I'm thrilled. Ok I won't be reading nursery rhymes to anyone anytime soon but it has been lovely just sitting looking through some of the old stories anyhow! Then on Sunday I stopped in at Jordan and Jen's as I wanted to give Jen her birthday present and have the three of them sign a birthday card for Ammy (grandma in the States). I thought it was sweet that Jen printed off a picture of her latest baby scan with the baby "waving" and put that in with the card. She was telling me though that her doctor is already talking about signing her off sick as she has been getting contractions caused by stress!!! Apparently they had another "incident" last week where they had to call security in. She works in a psychiatric hospital and some of the patients can be aggressive and even violent, so I guess if they can't take her out of that environment for the duration of her pregnancy she'll be signed off as a precautionary measure! Then she asked if she could ask me a favour (of course). When the baby is here she wants to drop down to working 80%. She would be allowed to take Mondays off and "would I be willing to take care of the baby on Friday mornings until Jordan gets home at lunchtime?" That way they could put the baby down for a place in the local crèche just three days a week. Would I??? Damn, I thought they'd never ask! I wouldn't be willing to look after the baby full-time because (a) I live too far away and (b) I've worked full-time for 40 years and this is finally my time and she/they absolutely agree with me on that. That being said, I told her I'd be free on Wednesdays and Fridays and obviously any time they needed help for whatever reason. I think it was a relief to her because she was saying that taking the baby to a sitter would cost them around €600/month and the crèche would be around €200 - probably less - and she was more inclined towards the crèche because she had heard horror stories about some sitters. Now I know I'm biased because my neighbour took care of Jordan and it was a wonderful experience all round but I think all things being equal I'm more in favour of a crèche too. That being said, heck, you can sure tell the difference between socialist France and non-socialist Switzerland. I found a place for André in a Swiss crèche when we moved back here in 1989 and even then it was over 700 Swiss francs a month. The going rate when I left work was around SF 2,000/month and I've seen up to SF 3,000/month too, so €200 doesn't seem that much to me!

As I've been sitting here typing this I've just listened to Kamala Harris' speech at the SCOTUS hearing and I have to say she impresses me more and more, putting it out there and saying it like it is. I also recently saw a few Youtube clips of Pete Buttigieg and damn he's impressive too - and young - and while it didn't work out for him this time round I definitely reckon he's got a future in politics that's for sure!

And finally Facebook reminded me the other day that this time three years ago I was in Rhodes with Steve! Damn, that brings it home to me that he's been dead over a year now. I guess that might have had something to do with my feeling down the past couple of days! 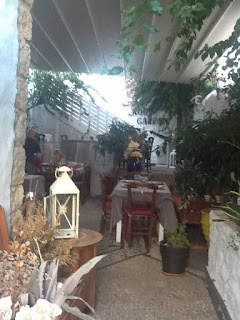 That's actually Steve in the left hand side of the picture talking to an older couple in a restaurant in Lindos. To my mind they had the perfect set-up. He lived in the south of England and she lived in Scotland and they used to fly up and down the country to see each other regularly and head off on holiday together a couple of times a year. Had he lived, I could have seen that kind of relationship working for Steve and me. We were both very independent and neither of us had any interest in living with someone again, but we got along so well. Sad really, I wish he had had many more years to enjoy his retirement!

And talking of FB, I've mentioned before that I play Words with Friends with quite a few people. It seems to be etiquette that you don't chat back and forth with people you don't know, except I do chat occasionally with a chappie in New York. Anyway, a couple of days ago, "handsome" popped up and asked me to play a game. Immediately I get kinda suspicious because mostly I'm playing against women, so I'm already expecting something funny. Well sure enough after a couple of moves I get a message "Where are you located? Are you married? Do you have kids?" etc. and I'm thinking "oh oh, here we go again", and sure enough today I got the old "Can we try communicating on Whatsapp as it's easier?". You may remember I mentioned the guy in Texas who wanted my email so we could "get to know each other better". It's happened about four times now, so I sense I'll be blocking someone later. Judging from the things women have said in some of the groups I'm on I'll either be getting a request for money at some point or receiving an unsolicited dick pic! Yeah, that'll be fun! 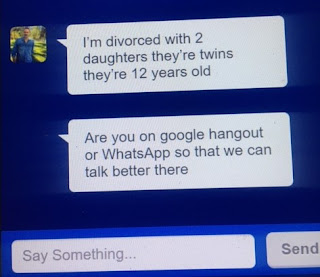 One of the ladies made me laugh because she got the dick pic and this is what she sent back to the guy! 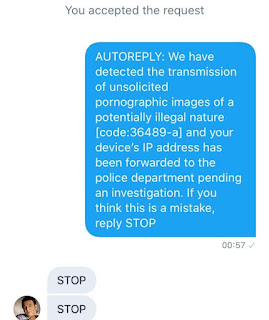