When Jen and I got back from IKEA on Friday Max was still at my place working on the heating system. He reckoned he had finally got it all figured and explained to me that there was a clapet de non-retour in there that had no place being there. Yeah, that's what I was thinking too! The closest I can get to it in English is a non-return valve? (I'm sure Dave will correct me), but once that was removed it now seems that my heating is up and running smoothly again. He also agreed that it was better to let the heating system run continually for most of the day on a low temperature rather than have it set on a timer as the system would have to work harder to get the room temperatures back up after continually stopping and starting. So that's where I'm at, although he still needs to get his supplier out to look at the water heater. And talking of water, I asked what the water was all over the basement floor and he explained that he had purged a few litres of water into a bucket and when he picked it up the handle had broken off, so all in all I guess he was having another bad day at my place! The water in the basement is no big deal as it's a stone floor and it dries easily, but I sense Max will be glad to see the back of me at some point (as I will him, of course)!

It's weird though because as time goes by I'm picking up more and more technical words/phrases in French that I have no idea how to translate back into English because I never had my own home in England. My dad used to roll his eyes when we were all together because my sister has lived in Denmark for over 40 years and comes out with things that sound like "hurdy, gurdy, wurdy", and then I get stuck on a French word and he would say "does anyone speak English round here anymore?" and we'd just laugh. It's even weirder because my mom's first language was Welsh so I'm sure he'd crossed that bridge more than once right?

Today is the first day that the online application for resident's permits is up and running, and taking a quick look at it, assuming the site doesn't crash, it doesn't look too onerous. André will have to provide a few more papers than Jordan or I because although he lived in France for 21 years, he had been living in Switzerland for the past 10 years so will be treated as a "new resident" I guess. Still, he should be able to provide everything pretty easily too!

In other news, the kids had told me to reserve 18 October for a birthday surprise. It turns out they were taking me and Jen's mom to the hot springs in St. Gervais for the afternoon! These are true hot springs that have been used for therapeutic purposes for many, many years and there is a slight odour of sulphur when you first walk in, but that soon abates. The springs are right at the foot of the Mont Blanc and with the weather being cold but gorgeous it was the perfect day to go. When we got there Jen told us that she'd booked us all massages (say what?), so she went off first for a "pregnancy massage" and then her mom and I were taken to another room for a joint massage session. We had the option to insist on individual rooms but we both just said "what the hell" and went in together, although I have to admit it's a bit weird to be getting semi-naked with a woman I hardly know but hey, what can I say. So we got to have a lovely massage also, and then André and Jordan went in for theirs. We spent about four hours there all together and I have to admit it was great to spend time with my kids again. I had forgotten how funny they can be and how they really spar off each other. A very helpful older employee was explaining to the group in front of us that they should take note of the number on the dressing gowns they had been provided with in order not to mix them up. When I said that we didn't have a number on ours he explained that we had been given grey gowns because that meant we were getting a spa treatment also! So André does this routine about "move over there if you don't mind, grey dressing gowns coming through" and we just doubled up laughing. The only "down" side was that I washed my hair in the shower before we left and only then found out that we weren't allowed to use the hair dryers because we couldn't be blowing hot moist air around. They had also closed down the Turkish baths for the same reason, but everything else was open to us. So I left there with wet hair thinking "damn I'm going to get sick tonight" but it was fine in the end. As we were heading back towards home, Jen told André to "park up over there" and that was when we found out that we were also going out for dinner. Now pretty much the only restaurants open on a Sunday in France will be the "immigrant" restaurants, so the Chinese or the Indians, and that's where we ended up, having wonderful Indian food and all paid for by my kids! What a great way to spend a (belated) birthday! 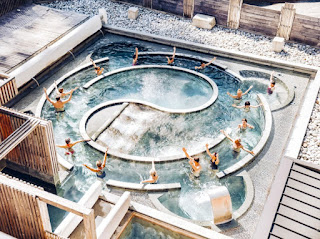 This morning I contacted the Mairie in Amancy regarding our sewing club and the new covid restrictions that have been reintroduced in order to try to contain the upspike. All things being equal we can still continue to meet, but masks will be mandatory everywhere, with the limit of six people being allowed to meet up at any one time only applying to outdoor events. But as soon as I'd got off the phone with them I received an email notification from the gym I signed up at to say that Ben (my trainer) has tested positive for covid19 and that they would be closing down until 26th October! Looking back at my dates, the last time I actually saw him at the gym was 12 days ago (when I just said hallo) so I will stay away from anyone until this Wednesday as that will complete my 14 days of no contact with him. I'm really glad I didn't find this out yesterday though before setting off to St. Gervais. I don't have any symptoms anyway so I'm sure everything is fine, but I hope he's ok, and in any case I will give sewing club a miss tonight also, for obvious reasons!