So now it looks like we might be heading back into a total lockdown. I can't say I'm surprised but we should find out tonight when the President speaks to the nation. I was at one of our local markets this morning when I saw the Maire of the commune where we have our sewing club and he was telling me that rumour has it that that's what's coming our way (again)! Not that it will bother me too much if it does happen, but then I know how lucky I am given my personal situation. I was in the local tobacconist's and two employees were having a back-and-forth about how "if a new lockdown hits this Saturday will she get paid for Saturday as it's her day off?" One was saying yes and the other was saying no - and I couldn't help but hear the distress in their voices. When you maybe aren't in a great financial position to begin with it has got to be so stressful! Tonight we have the AGM of the Amancy Leisure Associations and I have to go as the sewing club rep. I think the meeting will be short and sweet, with everyone handing over their club's accounts and, hopefully, the commune handing out the annual subsidies that they very generously give each club (in addition to making the venue available free of charge)!
When I woke up yesterday morning I saw that I had managed to sleep almost nine hours without a break! Crikey, I knew I slept well but nine hours is a lot even for me! I've pretty much always been able to just roll over and go back to sleep - as have my kids! In fact, I never met any other family where mom and dad had to go up and wake the kids on Christmas morning because they obviously preferred their beds to anything Santa might have left downstairs! I tell ya, if sleeping were to become an olympic event, we've got Team GB right there! So thinking that I really should make an effort to get something done I decided to pressure spray my terrace to get all the accumulated muck off it before the really cold weather sets in. I don't mind doing this at all, but it's quite a faff getting the hose and the pressure sprayer all untangled. Then by the time I've done the whole terrace I realize I'm starting to get very wet, so it's a good job it only takes me around an hour all told to get it done, as by that time I'm just about ready to strip off and take a hot shower to stave off the frostbite!
Earlier this week my niece posted photos on FB of what I suspect is their half-term break down in Cornwall and my how those photos brought back memories. They were in Tintagel and had taken the walk up to King Arthur's castle. What really drew my eye though was the most amazing sculpture of King Arthur. I never know how people can have the talent to create such works of art since I don't have a creative bone in my body, but I just love that sculpture. The bridge and the walkway weren't there either when I was last there (I was 15, I think) so we had to climb up and down the cliffs to Merlin's cave rather than take the "lazy way" round!
I couldn't resist including here these photos of André, when he had just turned seven, being picked by Merlin in Disneyland as "the only person with the magic to withdraw Excalibur from the magic stone"! 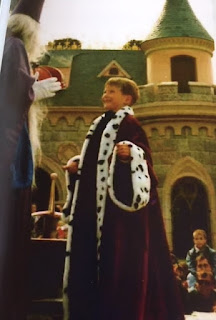 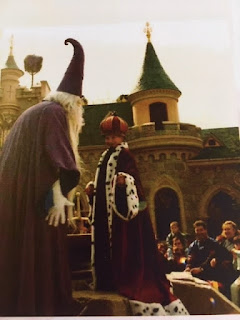 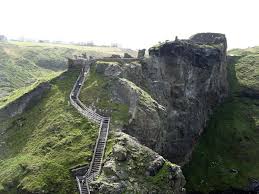 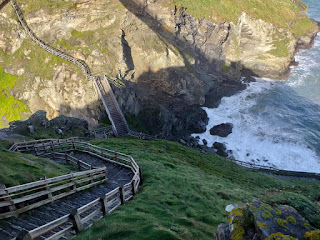 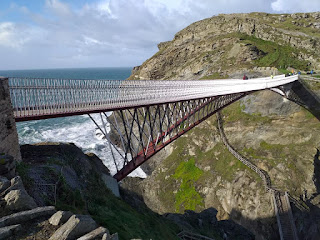 In other news, with my yoga and pilates classes already cancelled until further notice and the gym also closed down - plus a potential new lockdown on the horizon and another storm looming - I decided to get back to walking for a while as there doesn't seem to be an alternative form of exercise available right now. So I took another trip down to the lake at Passy and managed to get my walk in before the storm hit! 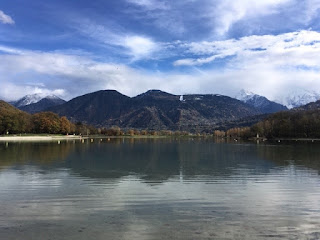 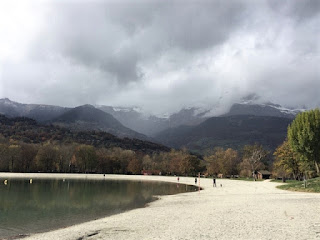 Getting back to the news, I've been picking up the US election news off Youtube lately in order to get just the highlights, rather than the whole caboodle, and I've been watching Obama campaigning for Joe Biden in Florida and man is he good! Like him or hate him, the guy's an orator, and he seems to be having so much fun laying into Trump as the two obviously hate each other! After I'd watched some of his speech, the next clip to come up was from a site called "Bad Lip Reading" and it is hilarious. One of the dubbed clips I watched was of Trump's inauguration and you get to hear what they were "really" saying (not)! Probably what they were really thinking more like, but those clips are funny. I didn't bother posting it here because it's easy enough to look up, but then I got side-tracked watching clips of Mock the Week and in the clip below you can see the talented British comedian, Hugh Dennis, doing a voiceover of world leaders at the G20 showing, perhaps, "what they were really thinking"!
Posted by Treaders at 16:45