I'd want my money back too!

Last week "the guy" came out to my house to see what kind of cassette would be best suited to insert into my fireplace. Well there wasn't much choice as it turns out. I don't want to knock out the fireplace and put in a free-standing stove (all the more so since I only had my floor redone a few months ago) and the actual opening in the chimney is not big enough to take the majority of the models available, so I'm going to have to go for a smaller, wood-burning rather than granule-burning cassette, but I'm fine with that. I'm just waiting for the quote and then having that installed will be more upheaval to look forward to this winter! The good news is that the French government are apparently offering a €1,000 incentive for this kind of work (i.e. sealing in an open fireplace), and I can take a tax deduction for it, so that sweetens the pill somewhat. Then this Friday I'm going to start the initial run around looking at bathrooms/showers as both my bathrooms are in a pretty sad state. Even though Jordan is willing to install everything, I'm more nervous about the cost of that project but they really do need a major overhaul so I'll have to get started on it some day. After that I reckon that'll have to be it for quite a while as the money tree will need to go into hibernation for a looonnngg time!

Sometime ago I bought sealant strips to replace the badly worn-out window sealant on some (most?) of my doors and windows and finally got round to having a bash at the window in my bedroom this week. I figured it made sense to actually get this stuff done before winter right? Well I had the strip all meticulously applied and then when I went to close the window it wouldn't shut. I thought shutting the window would squash it down somewhat but nope, there was nothing doing as it was too thick. So I had to take it all off and put another, thinner type of foam insulation in instead. It doesn't look great but it's an improvement over what was there previously. So I just need to seal another how many then to get them all done? Plus I need to get a few light fixtures replaced, and then I realized it probably wouldn't be a bad idea to start re-sealing some of the wooden surrounds on my windows as a lot of that could do with a makeover too. Gosh, there's always something to do isn't there, but at least with the colder weather coming along I should hope I will get my backside into gear and get some of it done!

I read in the press the other day that Michael Schumacher's wife has moved him from their property in Geneva to another property they own in Spain. Poor Michael! He spent most of his professional life competing in an extremely dangerous sport and look what happened to him in a "simple" skiing accident! I very much respect his wife for keeping his circumstances/physical situation private though - she and their children have been amazing! But seeing him mentioned in the press along with a photo of their Geneva home, I realized that it was indeed true that the Schumachers bought that house off the father of a friend of my son, André. André had spent some time there and was dead impressed - their own private beach, a helicopter landing pad in the grounds, plus the massive house of course, and I remember him saying that when they put it up for sale (something to do with "tax evasion in the UK/prison time"!!!!) a representative of Michael Somebody-or-other had come to look at it. Now somewhat stupidly I reckoned it was Michael Jackson, but nope, it was Michael Schumacher and seeing the photo of the house in the news this week made me realize that that was where André's friend had lived up until maybe 18 years ago! (I bet they never worried about wind-proofing the windows huh?)!

Then on Monday night we had our second sewing club meeting and had to take over the kitchen as well as the sewing room in order to spread ourselves out sufficiently. I got chatting to a lady called Marysette - who had been planning to retire in June - and asked her if she had, indeed, retired. She said she had, but while it was great to no longer be working, she'd had a nasty fall almost immediately after quitting work and had spent quite some time doing physio and attending doctor's appointments ever since! Since I knew she lived in a small town near here called Bonneville I asked her what she thought of the walk along the River Arve there (I've done it a few times) but she said unless she had her dog with her she wouldn't do it alone because it's quite isolated, with lots of trees and bushes and she didn't feel safe. Actually, that's why I asked her, so I guess she got the same vibe as I did from the place. I know, however, that she does lots of walking in her spare time (knee-permitting) and we've tentatively made plans to go out walking in Samoëns next Wednesday if the weather is half-way decent. As much as I love my walks in Thyez I'm getting a bit bored with it, so if we can get some longer, new-to-me walks in on the flat I'll be well pleased!

The ladies were also talking about the French government floating the idea of another two-week total lockdown in December to "get this thing over and done with once and for all". I hadn't heard any of this because I don't have French TV but it must be very worrying for those struggling to keep businesses afloat. Apparently they've also talked about shutting gyms down again, but my neighbour was saying that was more aimed at south-eastern France for the time being, but again, picture the gym where I've just signed up and I can't even begin to imagine how much money they must have sunk into that place, so I hope it doesn't prove necessary to shut it down again!
As I was heading out to said gym this morning, I spotted the local postie's van all festooned with balloons so I reckoned he must be about to retire. Actually I saw him a couple of weeks ago training a new, younger guy so that looks about right. I used to see the postie at Stan's sometimes when I came back from the market. He'd be there having his lunch (and a glass of wine) and though I didn't speak to him that much he was a nice guy. In fact, he was the person that when dropping off mail at a neighbour's house about five years ago realized that the guy's face didn't look quite right, so after about 10 minutes he doubled back and knocked on the door again. Turns out the guy was having a massive stroke (at age 54) and our postie effectively saved his life. So I'd say he's earned a well-deserved retirement wouldn't you!
And finally, after yesterday's bombshell New York Times article about Trump's taxes, today the wires are all abuzz with last night's "presidential" debate, which was anything but "presidential"! I tried watching some of the "highlights" when I got up this morning but after a couple of minutes I realized there was no amount of money in the world you could pay me to sit through more than five minutes of that stuff. Talk about stooping to a new limbo low - it just makes me sad that whatever their differences, the behaviour was just appallingly lacking in class (and yep, I guess I'm talking about "Mr. $70,000 hair do"). Damn, $70,000 in hair-styling expenses!!! Mind you, if my hair looked like that I'd be falling over myself to reclaim that money too! Trouble is, they say it ain't over till the fat lady sings and I sure as heck can't hear Montserrat Caballé singing anywhere can you? 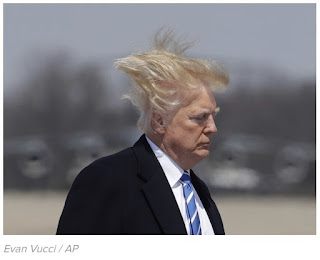