I went to my first Italian lesson of the year last night. There were only three of us, although I think one lady from last year will be coming next week. One new guy has also signed up so we agreed to more or less go back to the basics, both for his benefit and for ours to rehash what we learned what now seems so long ago. Still it was a good start! Then this morning the sewing club teacher sent me a message to ask if a colleague of hers could join us on Monday. I wrote back that that was not a problem but as I've also had two potential newbies contact me we might need to put a hold on any new enrolments since we're obliged to follow distancing requirements now. In any case we don't have enough tables even if the room were big enough. I mentioned to her that I had bought hand sanitizer and a few masks, just in case anyone showed up without one, but she said frankly if someone who can sew shows up without a mask it doesn't bode well for them does it! Ha, I hadn't thought of that! My thought was more along the lines that if someone forgot to bring their mask at least we wouldn't have to turn them away!

Then this morning, despite being tired and still pretty stiff, I made a good faith effort to get down into town for my first pilates class of the season. And would you believe it, despite them being in the process of setting up to welcome the Tour de France, I actually got a place right in front of the building! Problem was, when I went to the front door there was a sign up saying "no classes today due to the Tour"! Bloody hell, don't you think a group email might have been in order? Oh well, it wasn't that far anyway and at least I was up and showered I suppose. So I came home to faff around for a bit before I walk back into town to have a shufty. There was no Thursday market today for obvious reasons, but they're already setting up the drinks stands, bouncy castles and so on so it looks like it could be fun. Actually I'm not really that interested in the race to be honest - although I probably shouldn't put that out there on the internet before I get my French citizenship should I, especially given that Catholicism seems to take a distant second place to cycling in France. But, as Steve told me when he retired, he decided that whenever there was the possibility of doing something that might be fun, his mantra was always to say yes. To walk to the one spot where they should be coming down from Glières is only about a 15 minute walk, and if I want to go down into town (that will depend on how crowded it looks), it will be another 15, so given the good weather I'll head out in a little while!

Up at Glières they're already setting up for their arrival, although if I had realized they would be cycling through La Clusaz this year also I would probably have driven up there earlier in the day as I love La Clusaz. At this point no cars will be allowed up anyway, and from what I can see all the shuttle buses are fully booked, so walk it will have to be. That being said, my 80+ neighbour was all kitted out in his cycling gear when I came home as he was obviously off out to greet the Tour (that man is like a human mountain goat). When I offered to come with him he just laughed! Somehow I suspect he doesn't take me seriously - you think? 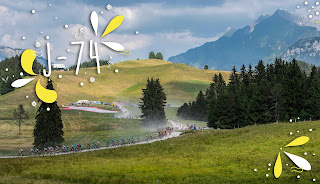 Pictures taken from the TdeF official site and FB page! 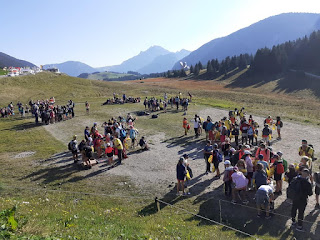 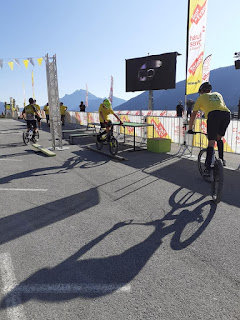 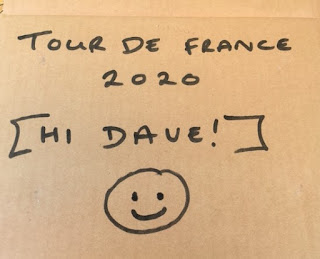