I've been keeping an eye on my friend's place as she and her sister drove to southern Spain last week where they've just bought a house. Her sister will be staying on as she intends to make her life in Spain (she's lived there before) and my friend will be back shortly. I sent my friend a message to say everything was ok and she mentioned that she had already received an appointment for 1 December for Annecy to check her paperwork in connection with her request for French citizenship! Say what????? She only sent her request in about 10 days ago and she's already got an appointment? I sent my request in July 2019 and not a peep. She did mention that as soon as she sent her email she got an automatic reply saying "if you've already made a request please send another one with the word "reminder" in the subject line", so I've now done that too. I don't actually mind too much as other than my French test I already had everything pretty much ready to go and I'm sure I'll get an appointment soon, but heck, it's a good job she mentioned it isn't it!

On Wednesday I did my first stint at the gym trying out the workout programme my coach drew up for me and I actually really enjoyed it. It certainly made a difference being shown how to use the machines correctly and while it was hard work it was good fun. The young coach was working on the ground floor and said if I had any difficulties to give him a yell and he would come upstairs and show me what I needed to be doing, so I'm pleased with the "service" too. My idea is to go to the gym on Wednesdays and Fridays but then they also seem to be the only days I will have to meet up with friends and set up appointments so I reckon I'll be lucky to get two days a week in at the gym, to be honest! That being said, I was aching pretty badly come Friday so I was more than pleased to have the excuse not to go as I was meeting up with friends in Geneva for lunch. As it was my birthday on Thursday they kindly paid for me but it is always a treat to catch up with these particular friends anyway as we've known each other for years and have a lot to catch up on. Well saying that, it was all great until I walked back out to my car and discovered I had got a parking ticket. Stupid idiot that I am I had forgotten to put my blue "free parking" disk up, and since Swiss parking attendants are like grey ghosts I got stung. Actually (and I think this is pretty horrible, to be honest) they even pay people who live locally to "snoop" (as I put it) and dash out and put parking tickets on cars for them. One old lady has a dreadful reputation as the local snitch as she lives just above a bakery and is forever dashing out of her house and giving people tickets. Still, I'm sure it gives her a lot of pleasure right? And in any case, although I would have been allowed to park free of charge for four hours, I did indeed forget to put my blue disk up, so more fool me!

When I got home from grocery shopping on Thursday my neighbour and her daughter had left a beautiful flower display outside my front door so I went round to thank her and have a coffee and a chat. But man-oh-man, did I get an earful. I've mentioned before that they are one of the unhappiest couples I know and she really let me have it so I guess it was more of an opportunity for her to get things off her chest than for us to have a chat. I hate to see her like this as I sense she is verging on a breakdown but what can I do? I hear the yelling either out in the back garden or through my wall but .... My only selfish consolation is that it is no longer me and my husband screaming and entertaining the neighbourhood, but I feel so sad for my neighbour as I think the world of her!

My friend hasn't been well so I guess I will see him when he feels a bit better, and the kids have told me to block 18 October as they are taking me out for the day - oh and "you'll need your swimsuit"! Damn, I wonder what my chances of losing 10 kg between now and then are - zero right? It's going to be a kinda group birthday outing as it's Jen's birthday at the beginning of October and also her mom's so we're all going out together. I'm thinking a hot springs somewhere - they have a lovely one at Chamonix I'd love to go to - but I guess I'll have to wait and see! I had my André Rieu concert lined up for 17 October but that has just been cancelled so at least there is a "positive" in that I won't be in Zurich that night!

My "Walk 1,000 Miles in 2020" FB group is still going strong and I'm loving some of the pictures these people are posting - they really are putting me to shame. Someone recently posted a picture of their hike over Crib Goch in north Wales and it was beautiful. My mom was from a small village in Snowdonia National Park and I really would love the chance to go back there to see the place as an adult rather than through a child's eyes!

I guess everything is relative but I remember going hiking with the school to the Lake District when I was 11 and they took us over Helvellyn, with us having to walk over Striding Edge to get to it!!! Maybe I'm just older but looking back I do wonder about taking kids over such hikes. I think also in the UK the bigger problem than the actual difficulty of the walk is the constantly changing weather conditions, but again, I still can't believe we went over Striding Edge at such a young age and probably not properly equipped!

My sister called me for my birthday and she was asking if I'd noticed how ill Boris Johnson looked. Well he's just gone through a nasty divorce (which is what happens when you get your girlfriend pregnant while still married I guess), he must still be feeling the effects of having a serious attack of covid, but I also think he thought he could "buffoon" his way through being Prime Minister and is probably only now realizing just how hard it is! I actually used to quite like him when he was just "Boris the Buffoon" but now? No way! If you do everything in your power to take on that kind of job you'd better damn well be serious about it - or at least have the gumption to surround yourself with competent people who know what they're doing. Remind you of anyone?
I see too that yet again the UK Government are promoting an anti-obesity campaign, partly as a result of the dreadful state some people are in in the UK and partly because they are trying to push people to understand that obesity is a pretty crucial factor in just how ill you might get if you have the misfortune to catch the coronavirus. I think it's a commendable aim, but when they post pictures on the TV more or less saying "your aim should be not to look like this", my mind always jumps to wondering if some of the (headless) people they are showing photos of might actually recognize themselves because of their clothes! I know that's not the point of the whole campaign but can you imagine just how mortified you would be (or maybe not - who knows) if you actually recognized yourself as the "face" (belly?) of the anti-obesity campaign!! (First thing I'd do is burn that bloody T-shirt, just in case anyone recognized me)! 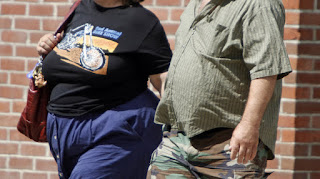 And finally, our temperatures have dropped like a lead balloon these past couple of days. Last night as I was shutting my shutters I saw that it was only 6°C (42°F) and it's "nippy" to say the least. I actually don't mind it being cold as I now get to bundle up and start working outside in comfortable temperatures, but to already see snow on Cou (the small mountain behind me) makes me realize that winter is well and truly on its way! 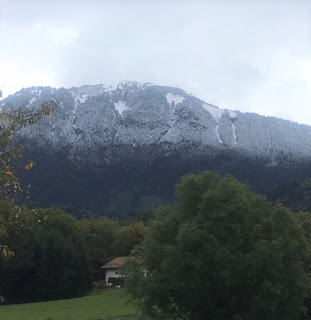