But what happened to the fly?

So I finally made it out to a vide-grenier on Sunday - my first of the year probably - but it was disappointing, to say the least. They were selling the usual tat, except for a few nice glasses I would have been happy to buy if I needed more desert glasses. But, nope, probably not. I wasn't sure if masks were mandatory -  as I understand it, outside they're not. That being said, I would say 90% of the people were wearing masks so in the end I decided to put mine on and go with the flow. I didn't buy anything but I did have a glass of wine on the way out. While I sat on the side drinking it, two little boys were trying to beat the hell out of any grasshoppers they found. They were catching them and then burying them in sand, only to smash them with stones later. I didn't want to get into it with them but eventually I said that if that grasshopper had made it through all that alive maybe they should just let her go and live in peace! I don't know, I was never that cruel as a kid but who knows! 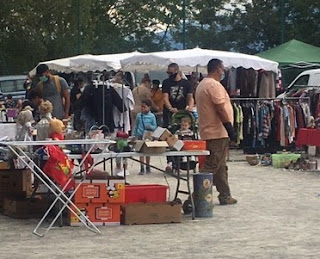 And the other night I watched the first episode of a new series of All Creatures Great and Small that is now playing in the UK and I'm thinking I will probably enjoy it. This series was around in the 1970s and I really loved it. It portrays the life and times of Yorkshire vet, James Herriot, and while those times were physically much more difficult, I do wonder if they weren't happier times emotionally, although believe it or not, I have yet to read the book!

In other news, I see that Kaing Guek Eav (also known as Comrade Duch) died in his prison cell last week. He was one of the principle protagonists responsible for one of the worst prisons in Cambodia during the reign of Pol Pot. Comrade Duch had apparently been a maths teacher, but for whatever reason, got sucked into the evil that was the Khmer Rouge at the time!

I mention this because when I first went to Geneva I ended up working with the sweetest, kindest, most gentle man I will ever meet, and he was Cambodian. He was one of seven children (I think, maybe eight) and all of those children - except for him and his sister - were massacred by the Khmer Rouge - along with his parents. T had managed to make it out of Cambodia, but told me that any people with even slight "indentations" in their noses - which would indicate that they wore glasses and that they could read - were massacred in order to "level down" the intelligence of the population. What struck me most was that the Khmer Rouge also killed their children, because they didn't want the children coming after them years later to exact revenge! This is oddly reminiscent of the initial film of The Godfather, in which Vito Corleone's father had been shot, and when his mother went to plead with them to spare her son's life, the Godfather's response was to kill the mother, and try to kill Vito, "so that the son does not exact revenge later"!
So when I first arrived in Geneva I ended up working with sweet T. At that time, he had made it out of Cambodia but his sister and her husband were still in concentration camps back in their homeland. So a Vietnamese colleague was doing the rounds collecting money trying to raise enough money in order to bribe prison guards to let them out. Apparently it worked - although my memory of this is not clear -  because his sister and her husband made it out and ended up as refugees in Zurich. But, for some reason his brother-in-law went back to Cambodia to try to get more family members out - and that was the last anyone ever heard of  him! So whatever Comrade Duch's justifications were for running a concentration camp that killed 14,000 people, I'm glad he never saw the light of day again - and that my lovely T did and lived to tell his story and find any happiness he could with his lovely Italian wife!
And today I had my first yoga lesson in probably six months, but you know what, it only took one lesson for me to feel totally relaxed again! Okay, maybe I was a bit squeaky, but by golly it felt good. After that I drove out to Sallanches as I wanted to visit le Vieux Pont and cross that off my "to visit" list. I managed to get a good walk in there before I got a call from Max saying he had the spare part to repair the leak in my heating system and could he stop by? I told him I would arrive as soon as I could but as the garage door was open anyway he could just show up whenever. On my way back home I got stuck behind a van with a sign which read "Gérard Bastard - mechanic". Oh, I remember those days, thinking I could never marry that guy, what with having him introduce me and my kids as "this is my wife and these are the little Bastards"! Still, it's better than living in Wankdorf in the Swiss German part of Switzerland, where all the Brits have to stop and get a picture, isn't it! All the same, I was glad when I got home to see that Max had parked properly on my driveway, given the recent tensions with my neighbour about his blocking my driveway/parking in front of my garage!

Since I knew I would be having to get up early for my yoga class, last night I decided I wouldn't stay up late reading the news and surfing Youtube - that only ends up with me having nightmares about Donald Trump. So I ended up watching a video of Gina, the Italian nonna, and spent half the night dreaming I was stuffing mushrooms instead!
And finally, I saw a rather sad article in the French news this morning. Apparently an older gent had been having problems with a fly that was driving him nuts. So he went into his house and came out with an electric fly swatter and tried swatting the living daylights out of that bugger. Trouble was, unbeknownst to him, there was a gas leak in his home and the electrical spark from the fly-swatter ignited the leaking gas and blew half his house away. He emerged from it pretty much unscathed - but apparently no-one knows what happened to the fly!
Posted by Treaders at 20:22