I made it to yoga on Monday even though my legs and backside were killing me from our hike the previous day. When I told our teacher about all my aches and pains she said "oh you'll just love today's class then", so that was encouraging at least. She explained that in yogic beliefs winter is the season of descending energy, just as the sap in trees and plants descends back into the earth for the winter. Right now we're in the "between seasons" period and she was explaining that the body stores water during the winter (for whatever reason) and today we would be doing exercises, torsions more specifically, that would help the body "wring out" that water like a sponge, ready for the ascending energy of spring. I'm all for being wrung out like a sponge as I've always felt I suffer from water retention to a certain extent, and can easily go up or down 2-3 lbs in weight overnight! In fact I have indeed lost four lbs since Monday so maybe those exercises really did help huh. Either way, they certainly felt good! And I took the bull by the horns after my class and decided to go out walking to take advantage of the continuing good weather! I also did a one-hour walk today as I'm trying to keep up on my "1,000 Miles in 2020"  challenge, and while I'm not going to break any records (I most likely won't even make the challenge), so far I've walked 281 km, or 175 miles since 2 January and I'm pretty pleased with that!

So what else is new? Oh yes, my foray into kombucha-making was a complete disaster. I waited out the required four weeks for my scoby (my baby) to develop in my darkened spare bedroom but when I finally took a look at it there was no way I was gonna use that stuff to make kombucha. It was supposed to look like a kinda "slimey mess" - you know, like you might find in vinegar that has turned slightly - but this was more green and mouldy-looking so I thought I'd better give a brush with botulism a miss and threw it away. So it's back to the drawing board on that one then! Or else, I think I might just stick with buying it at the health food store!

Then on Tuesday I noticed that our new neighbours opposite were having their roof treated so I wandered over to talk to the workmen as I think my own roof could do with a de-mossing and restorative treatment (it was done eight years ago). So long story short, I'm now signed up to have my roof done in March (the cleaning and tile-repair part) and then a "sealant" applied four weeks later. It's all money of course but I need to keep up with these things for my own comfort and to protect my investment anyway! 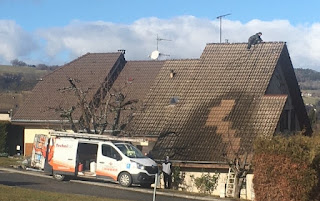 I also learned this week that the French will be changing some of the requirements for requesting French citizenship as from 1 April. Right now anyone 60 or over (so that's me then) does not have to sit a written French exam (I'm not sure why they figured we old foggies didn't need this but …). Now under the new requirements everyone has to sit a 90 minute written French test, regardless of age. I can't say I was overly thrilled, even though the test doesn't worry me, but it's just one more hoop to jump through in a long list of other hoops, so I'm starting to feel a bit like a circus animal. And, if I get my initial appointment within the one year time-frame as indicated (that would give me an appointment in July), I need to get this test beforehand!! With that in mind, I went on the French Government website last night and found four or five test centres in this area and booked the first spot available to me on 16 April. So I decided to knuckle down last night and sit a previous exam paper and it was ok to be honest. I got 99% thankfully, but I'm just going to keep taking these tests so I will be up to speed when the test comes around. Frankly, I'd rather do this test than try to learn all about the kings of France but what I want is neither here nor there in the end is it! I also spent an hour tonight putting away all my paperwork as I had it spread out all over the bed in the spare room. In the end I just thought to heck with this, I know where it all is when needed. I also read in the paper today that all the EU countries are going to issue qualifying expat Brits (that would be me) with a special ID card recognizing us as "third country nationals" with the right to live in our chosen country, but specifically mentioning Article 50 of the (Brexit) Withdrawal Agreement. So onwards and upwards it is then!

Tomorrow night, instead of our usual board game evening, our group has decided to go play a couple of Escape Rooms right near the Swiss border. I'm looking forward to it as I've never played an Escape Room (I suspect I won't be very good at it - well I certainly wasn't when we went on our Sherlock Homes "Whodunnit" day out a couple of months back)! Then on Sunday I'm finally going to see "Judy" with my friend. It's only just come out over here as they wait until the dubbed French version is ready before they bring it out for public viewing (although we'll be going to see it in English of course)! I'm looking forward to that too!

On Wednesday we got our first real snow of the season, but even that didn't last long, oddly enough. But it would have to be the day I had to go pick the kids up from the airport after their trip to Pittsburgh wouldn't it. No snow all season so far and yet on Wednesday they were calling for five inches!!! So I decided to go use the gym at work and then head out to IKEA after having the inspired thought that I could spend a couple of hours in IKEA (I'd been wanting to go for a while) and hang around there until the kids arrived as it is only five minutes from the airport. And that's what I did (in addition to buying lovely new bedding and a couple of rugs I'd been after). You know, IKEA's quite nice if you can go when there are no crowds, but finding your way out of that place is (deliberately) also a bit of an Escape Room challenge in itself!!

The kids made it back with no hiccups thankfully. The return Pittsburgh/London flight was only five and a half hours, as opposed to eight hours on the way out, so that must have been quite a tail wind don't you think! They had a great time and everyone made a big fuss of Jen being French and her cute accent (including the very friendly immigration officer). Well everyone except my ex's gf it would seem. Sadly there's no love lost between my kids and their wives and the gf as they think she's weird. My family also felt the same way about her at both weddings, to be honest. My feeling was she was ok if she was the centre of attention all the time but if not, forget it. I mean come on, she's 57, but hey, what can I say, I don't have to live with her! Anyway, the kids had a great time with the ex and his family and even though the gf didn't make them particularly welcome they thoroughly enjoyed themselves. Or maybe, as they said, they actually enjoyed themselves all the more so since the gf never went with them when they went out! Oh well. Grandma was all "I love ya hon" and hugging them, so I'm glad they got to see her. I had made sloppy joes and bought bread to take over to their place for their first night back but Jen said all they wanted to eat was salad. No more pizza, hamburgers or hot dogs. They wanted salad! That's not a reflection on the ex's family as grandma is a good cook (as is my ex), but I guess there wasn't an awful lot of cooking going on last week.

Then they were telling me the stuff they'd bought in the US. Not everything was cheaper but they got some good deals with the US$ being so weak against the euro. I mentioned to them afterwards did they realize that there are $$$$$ limits to how much you can bring back without declaring it at customs, but they both just shrugged. Not that they were buying Rolex watches of course, just a few pairs of jeans and a couple of jackets, but I suppose technically they might have been over the $$ limit, but who knows!

And that brings to mind a story of my lovely friend, Joyce, now sadly deceased. I must write some of my "Joycey" stories sometime as she was a great friend, a lovely person, and an absolute blast! But that'll have to wait till some other time I think. Anyway, many years ago, before there was free movement of goods and people between France and Switzerland, there was, indeed, a limit to the monetary value of merchandise that could be bought in one country and taken back to the other. I think at one time it was 200 Swiss francs, so the Swiss who went into France grocery shopping (because it's cheaper) would pile all the family into the car in order to get the higher allowances. Even then, there were still restrictions on how much cheese, meat and alcohol they could bring back into Switzerland regardless of the cost. Anyway, Joyce would quite often go clothes shopping in Switzerland during her lunch break and take the (undeclared) clothes back home with her to France in the evening. One time after another shopping trip I asked if she wasn't afraid of getting stopped at the French border on her way home. At that she just opened up her raincoat like some ol' flasher and stood there wearing just her underwear underneath! Yep, she used to come in to work with just her underwear under her coat (her husband must have thought he was going to get very lucky at work on those days) and then cut the tags off the clothes and wear them home again in the evening. Or she would keep old dry cleaning bags and take them back home that way. I mean, it wasn't exactly hard-core smuggling but when I asked her if she was ever afraid of getting stopped at the Swiss border coming in to work in her underwear she just laughed. She was such a cracking looking woman in her younger days I'm sure the Swiss border guard would have come over all "unnecessary" if he had rumbled her! God love ya Joyce. I still miss her so much even now so many years later!