I didn't do very well with my walking last week, which was pretty pathetic really because the weather was nice and I really have no excuse (although, believe me, I'm still trying to think of one). I just felt kind of lazy so I guess you have to go with the flow don't you. Our Italian teacher has been off sick for the last month so I decided to check with the community centre to see if she was back on Wednesday as I wanted to get her some flowers as a "get well soon" gift. While I was choosing the flowers I saw the florist had some pretty red tulips in a bag with hearts on so asked if she had any other kind of container as these were obviously leftovers from Valentine's Day. When she said she didn't have anything else she told me just to take them as they were right on the limit anyway and I could have them for free! Nice huh! I didn't give these to my Italian teacher of course (I bought her a lovely bouquet of dried flowers), but it was a really nice gesture on the part of the florist I thought! 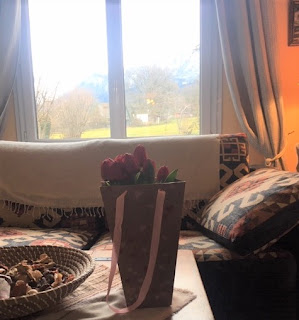 After leaving the florist's I decided I really needed to get some walking in so crossed the road to walk in a little park I had spotted some time ago but had never got round to visiting. It was small - seriously, you could walk round that park with a broken leg in about 10 minutes, but at least I got a few laps in and very pretty it was too! 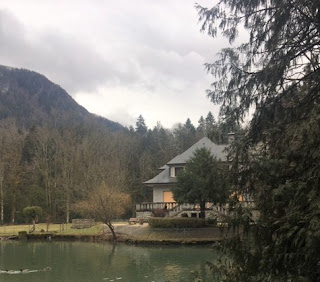 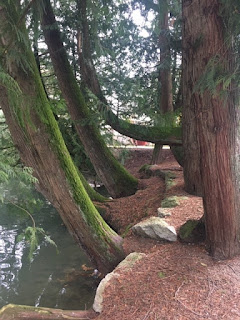 Then today three of us decided to go off in search of the newly-completed 7 km addition to the cycle path near Talloires on Lake Annecy, mainly because the weather was glorious and I believe it has forecast snow come Wednesday. So off we shot and since we really had no idea where to find this cycle path we decided instead to head up to see if we could find the waterfall known as the Cascade d'Angon. Well we found it all right but somehow managed to find the "scenic" (read "vertical") route rather than the easy route. I tell ya, the first couple of km really were vertical and tough going, although if you take it easy and go at your own speed anything is possible really isn't it. Well we made it to the top of the climb into a pasture, then up further to a road, which lead back down towards the path to the waterfall. It was quite slippy going down to the fall but there were barriers and it really was definitely worth the effort.

The little kids in the picture above had to stop every so often and have a drink of "magic potion" to help them up the mountain - turns out it was fruit tea (but it obviously did the trick)! 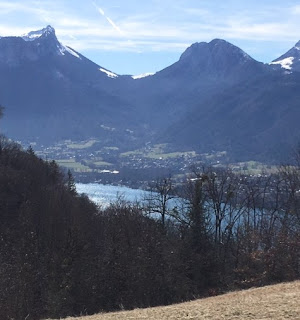 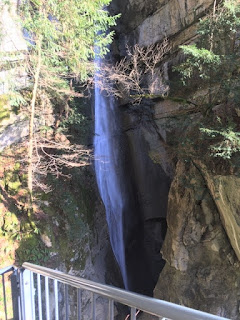 By the time we got back down I had clocked up 19,750 very tortuous steps and 15.83 km (or just under 10 miles) but boy were we tired. So we spent the next hour over a lovely glass of cold cider while our muscles started to seize up a treat! I'm so glad I've got yoga tomorrow!

And here's a tip for the uninitiated:

And can you believe this weather! That is snow on the mountains in the background and these lads are going swimming in the lake. Now admittedly they didn't stay in long and that huge bottle of Ricard may have had something to do with their decision, but crikey, they're braver (or maybe just dafter?) than I am! 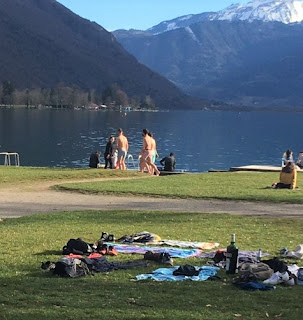 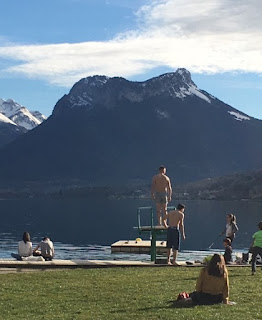